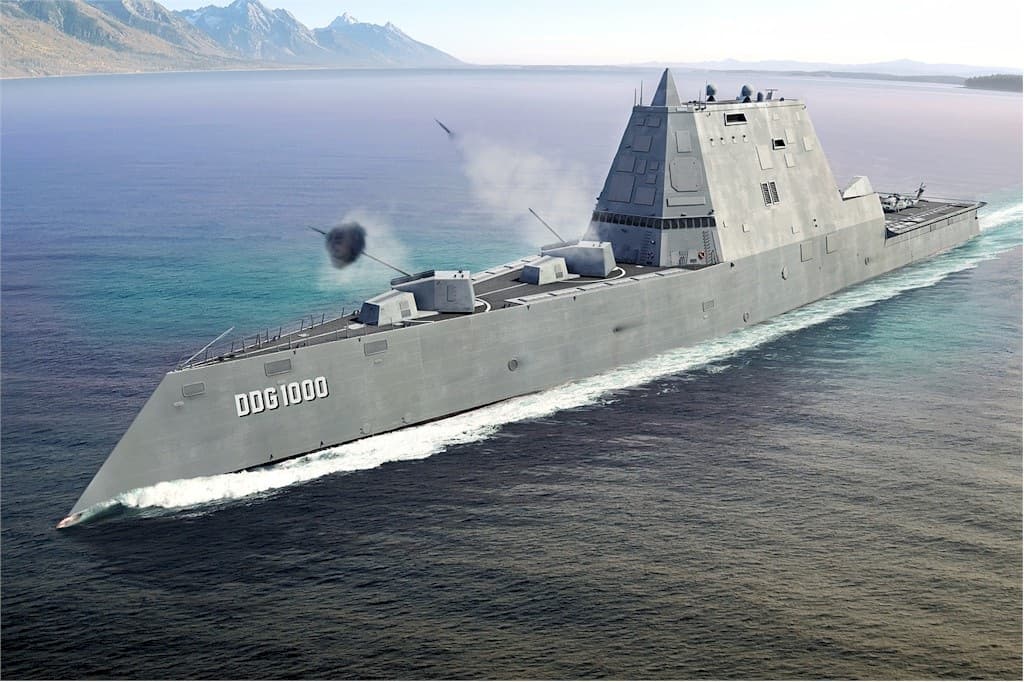 Captain James Kirk (yes, that is his real name) will be placed at the helm of what is probably America’s most futuristic 'battleship.' Spending years in development, the USS Zumwalt is an ocean-going vessel that looks like a spaceship, with sharp angular sides and a body that looks upside down. Now that the ship has been completed, it is currently preparing for its first set of trials on the open sea.

“We are absolutely fired up to see Zumwalt get underway,” said Kirk to the Tampa Bay Times, “For the crew and all those involved in designing, building, and readying this fantastic ship, this is a huge milestone.”

Classified as a destroyer, the Zumwalt was built to escort larger ships. It is the first of a three-ship trial program to see if this new generation destroyer can outperform the previous ones.

Among other innovations, the Zumwalt has enough onboard automation that it will require only 154 crew members to maintain her (compared to 250 on similarly sized Arleigh Burke class destroyers). In addition, the ship can generate enough power on board to fire laser weapons or rail guns...once the Navy develops them, of course.

The Navy is hopeful that they will soon have a new class of ship that is deadly enough to attack targets with powerful guns, stealthy enough to avoid counter attacks, and crewed lightly enough to keep labor costs down. But it is not without its risks.

The Zumwalt’s weird body is known as a “tumblehome” design, and while it’s great for stealth, it could pose some problems on the open sea. Defense News reporter Christopher Cavas wrote in 2007 how, in the late 19th to early 20th centuries, French and Russian battleships attempted these tumble some designs before. All these ships ended up getting sunk, with huge loss of life, and as a result, the designs were eventually scrapped.

Nothing like the Zumwalt has ever been built. The 14,500-ton ship’s flat, inward-sloping sides and superstructure rise in pyramidal fashion in a form called tumblehome. Its long, angular “wave-piercing” bow lacks the rising, flared profile of most ships, and is intended to slice through waves as much as ride over them. The ship’s topsides are streamlined and free of clutter, and even the two 155mm guns disappear into their own angular housings.

The shape was popular among French naval designers in the late 19th and early 20th centuries, and a number of French and Russian battleships — short and fat, without any wave-piercing characteristics — were put into service. But several Russian battleships sank after being damaged by gunfire from Japanese ships in 1904 at the Battle of Tsushima, and a French battleship sank in 90 seconds after hitting a mine in World War I. All sank with serious loss of life. Both the French and Russians eventually dropped the hull form.

Hopefully, the Navy's improvements on the design will prove beneficial.

Read This Next
Drone Tanker News
The US Navy Just Used a Drone to Refuel a Fighter Jet in Midair
Found Footage
Pentagon Confirms That Leaked Video Is Part of UFO Investigation
Killer Robot Ships
The U.S. Navy Wants to Roll out Autonomous Killer Robot Ships
Futurism
Sailors Use Xbox Controllers to Operate Part of the Navy's Newest Attack Sub
Futurism
Star Trek's Medical Tricorders Have Made It to the Final Round of XPrize
More on Robots & Machines
Blow Up Doll
Yesterday on the byte
Ukraine Accuses Russia of Using Inflatable "Dummy Tanks," Which Deflated
Robot Arm News
Jan 29 on the byte
European Space Agency Shows Off Concept for Martian Sample Picker-Upper
From the Dept. of...
Jan 29 on futurism
The Best Desk Lamps of 2023
READ MORE STORIES ABOUT / Robots & Machines
Keep up.
Subscribe to our daily newsletter to keep in touch with the subjects shaping our future.
+Social+Newsletter
TopicsAbout UsContact Us
Copyright ©, Camden Media Inc All Rights Reserved. See our User Agreement, Privacy Policy and Data Use Policy. The material on this site may not be reproduced, distributed, transmitted, cached or otherwise used, except with prior written permission of Futurism. Articles may contain affiliate links which enable us to share in the revenue of any purchases made.
Fonts by Typekit and Monotype.