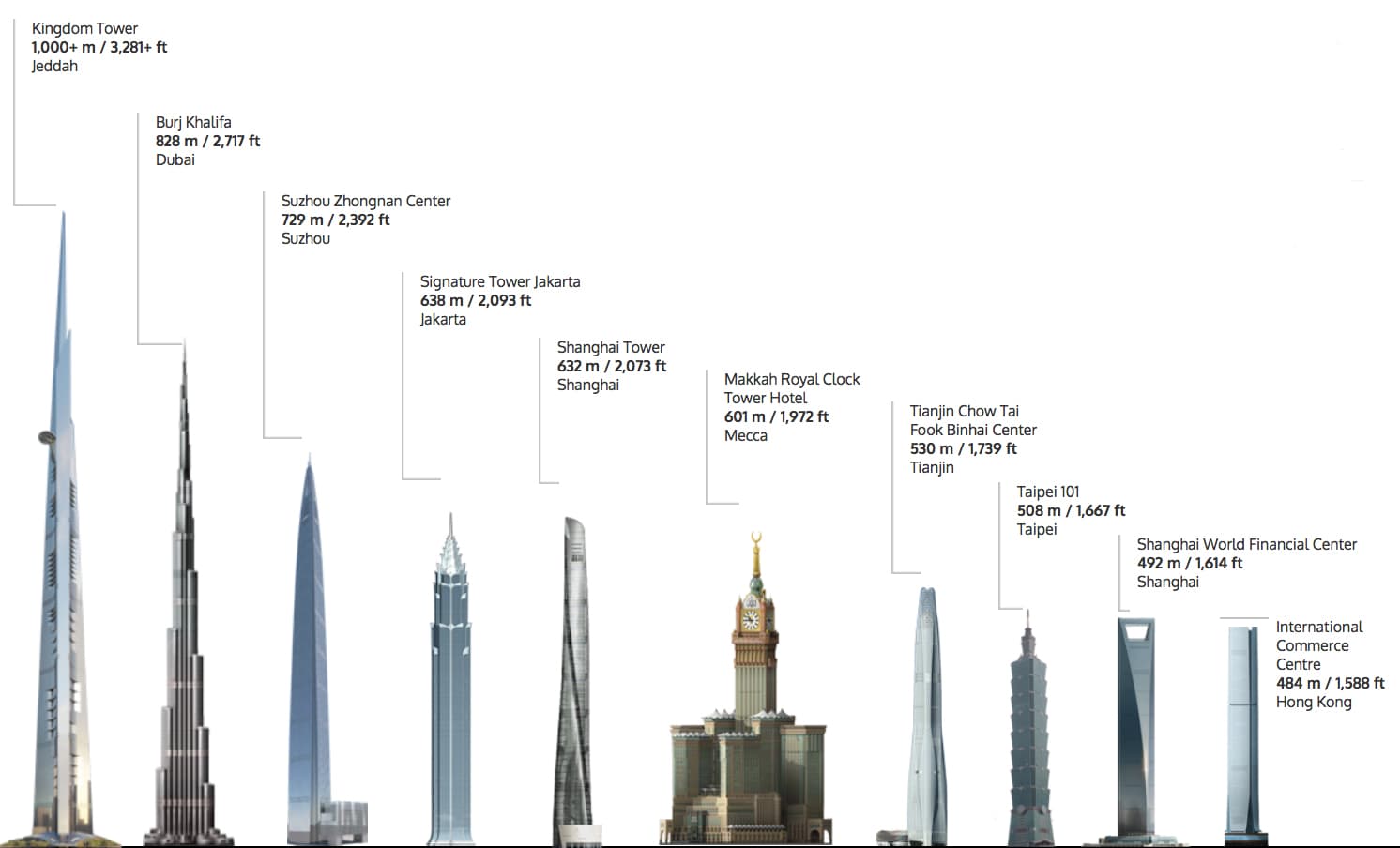 Saudi Arabia is planning on constructing the Jeddah Tower, a skyscraper that, at 1 kilometer (3,280-feet) tall, will steal the title of "World’s Tallest Building" from the current Guinness record holder. Indeed, the Jeddah Tower will dwarf the competition. To date, the Burj Khalifa, located in neighboring Dubai, is the tallest building on Earth. It stands 827 meters (2,716 feet).

The Jeddah Tower is scheduled for completion sometime in the year 2020. Currently, twenty six floors have already been constructed. It will be the centerpiece of the planned Jeddah City, which the Jeddah Economic Company and Saudi Arabia's Alinma Investment signed a financing deal for. All-in-all, the deal is set to cost some 8.4 billion Saudi riyals (or $2.2 billion).

Of this amount, a staggering $1.23 billion will go into the construction of the tower.

"With this deal, we will reach new, as yet unheard of highs in real estate development," said Mounib Hammoud, Chief Executive Officer of Jeddah Economic Company, in the press release. Hammoud added that the project will help the company complete its long-term mission, fulfilling their objective of "creating a world-class urban center that offers an advanced lifestyle, so that Jeddah may have a new iconic landmark that attracts people from all walks of society with comprehensive services and a multitude of uses"

How It Will Be Achieved

Formerly known as the Kingdom Tower, once completed, it will have 200 floors and will overlook the Red Sea. Ultimately, the tower require 529,547 square meters (5.7 million square feet) of concrete and 80,000 tons of steel for its construction.

Being so tall, its foundations will be laid 60 meters (200 feet) deep below ground. And being located near a coastline, different types of salt-tolerant concrete will be tested to ensure durability.

Wind load is another consideration; due to this, the tower will change shape as it ascends. "Because it changes shape every few floors, the wind loads go round the building and won't be as extreme as on a really solid block," explained Gordon Gill, a partner at Adrian Smith + Gordon Gill Architecture, the design architects for the project.

Delivering the concrete to the higher floors is another challenge. Most likely, the Jeddah Tower engineers will use a technique similar to what was used in the construction of the Burj Khalifa: Pumping the concrete upwards at night when low temperatures would ensure that it would set.

Read This Next
Notre Dame Fire
Fortunately, There Are Incredible 3D Scans of Notre Dame
Futurism
Japan Is Replacing Its Aging Construction Workers With Robots
Futurism
In the Future, Humans May Live in 3D Printed Space Colonies
Futurism
This Robot Works 500% Faster Than Humans, and It Puts Thousands of Jobs at Risk
Futurism
Dubai is Going to Be Home to the World's First 3D Printed Skyscraper
More on Robots & Machines
Blow Up Doll
4:46 PM on the byte
Ukraine Accuses Russia of Using Inflatable "Dummy Tanks," Which Deflated
Robot Arm News
Yesterday on the byte
European Space Agency Shows Off Concept for Martian Sample Picker-Upper
From the Dept. of...
Yesterday on futurism
The Best Desk Lamps of 2023
READ MORE STORIES ABOUT / Robots & Machines
Keep up.
Subscribe to our daily newsletter to keep in touch with the subjects shaping our future.
+Social+Newsletter
TopicsAbout UsContact Us
Copyright ©, Camden Media Inc All Rights Reserved. See our User Agreement, Privacy Policy and Data Use Policy. The material on this site may not be reproduced, distributed, transmitted, cached or otherwise used, except with prior written permission of Futurism. Articles may contain affiliate links which enable us to share in the revenue of any purchases made.
Fonts by Typekit and Monotype.