10 Science Mysteries Waiting to Be Solved

What made that giant hole on Mars? 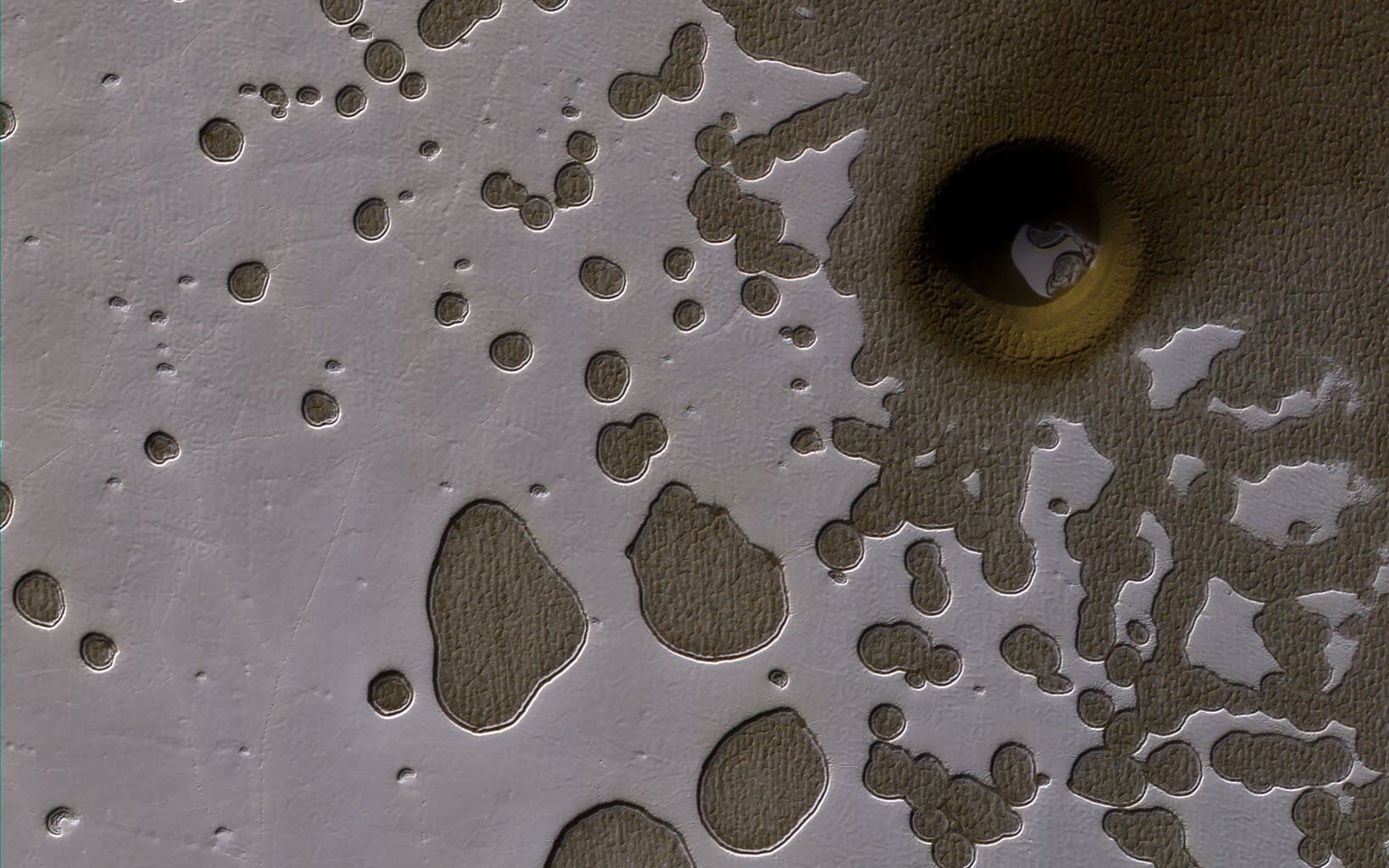 1. The impossible EM drive...works? Since first hearing rumors about NASA's physics-breaking propulsion system late last year, a paper describing their device has passed peer-review, and China claims to be testing their own version in space right now.

And yet, no one can explain how this fuel-less drive is able to violate Newton's Third Law: everything must have an equal and opposite reaction. If we learn anything this year or next, let's hope we can get to the bottom of this confounding machine.

2. Humpback whales have been forming mysterious "super-groups," and we still don't know why. Back in March, never-before-seen groups of up to 200 whales were appearing off the coast of South Africa, which is weird, because seven is usually the upper limit for these solitary animals.

The behavior could be due to changes in prey availability, or because the species has been making a surprising comeback in recent years, but the jury's still out on this one.

3. Astronomers have found evidence of a huge ninth planet on the edge of our Solar System — but we still can't find it, even after NASA recruited thousands of people to search for clues.

But earlier this year, we finally got an official candidate for the mysterious presence, so hopefully we don't have to wait too much longer to discover what's truly out there.

4. Archaeologists made a stunning discovery inside Egypt's Great Pyramid of Giza — evidence of a strange void behind the pyramid's north face, and an unknown cavity high up in its northeastern edge.

It's suspected that these could represent secret chambers that have eluded researchers and looters alike for thousands of years, and archaeologists are now hoping to non-invasively scan the insides of the giant tomb to figure it out.

5. Can we please figure out the nonsense that is the Tully Monster? This ancient sea creature that's so messed up, scientists can't stop arguing over it.

The 300-million-year-old creature had fins like a cuttlefish, eyestalks like a crab, and a rather intimidating "jaw-on-stick," and this jumble of body parts has seen it compared to everything from molluscs, arthropods, and worms, to more complex vertebrates like lampreys.

6. We still don't know what's causing fast radio bursts — arguably the weirdest phenomena in the known Universe. They're some of the most explosive signals ever detected in space, but they're so confounding, some scientists have even resorted to "Aliens?"

But with the exact location for one of these signals being finally pinned down last month, we might be on the brink of figuring out what's causing them.

7. Three separate experiments have found signs of a phenomenon that goes beyond the standard model of physics, and together they've hit a certainty level of 4 standard deviations, indicating a 99.95 percent chance this isn't a mistake.

If this result can be supported by further experiments, it would have profound implications for our understanding of particle physics, and force scientists to draw up a whole new branch of physics to explain it.

8. The "Alien Megastructure" star that just won't quit. Located 1,500 light-years away, KIC 8462852 (or Tabby's star), has been experiencing unprecedented dips in brightness — while most stars experience periodic dimming of about 1 percent, this star has clocked dips of a whopping 22 percent.

Tabby's star is so weird, one astronomer famously suggested aliens could be involved. With the latest bout of strange light patterns giving researchers more data to work with, let's hope they can finally figure this one out.

9. The US Air Force's mysterious X-37B space plane just landed after a record-breaking 718 days in orbit, but we still have no idea what it was doing up there.

As officials remain tight-lipped about what the unmanned drone was doing up there for so long, rumors have been circulating that the military might be testing NASA's EM Drive in space. Can we solve two mysteries in one?

10. NASA can't explain what made this strange, deep hole on Mars. You'd think its Mars Reconnaissance Orbiter has seen everything there is to see on the Martian surface during its 11-year orbit, but a snapshot taken over the planet's South Pole has revealed something we can't explain.

At 19.7 inches (50 centimeters) per pixel, we're looking at a feature hundreds of meters across, so did something punch its way through, or is it the result of a massive collapse? Until we get further evidence, your guess is as good as mine.

Read This Next
Brands We Love
The New 'What if 100' Book Uses Real Science to Answer Wild Hypothetical Questions
Brands We Love
Watch Thousands of Thought-Provoking Shows and Documentaries on Curiosity Stream
Brands We Love
Go Beyond The Science Headlines With The Fundamentals Of Physics Course
Brands We Love
Every Science Lover Needs This Subscription Box in Their Life
Brands We Love
CuriosityStream Is a Science-Focused Streaming Service for People Who Love to Learn
More on Hard Science
Tractor Beam
Thursday on the byte
Scientists Build Working Tractor Beam, Although It's Comically Tiny
Having a Blast
Jan 18 on the byte
New Study Shows Where You Should Hide to Survive a Nuclear Attack
Offworld Amino
Jan 15 on the byte
Scientists Find Building Blocks of Life in Meteor That Smashed Into Family's Driveway
READ MORE STORIES ABOUT / Hard Science
Keep up.
Subscribe to our daily newsletter to keep in touch with the subjects shaping our future.
+Social+Newsletter
TopicsAbout UsContact Us
Copyright ©, Camden Media Inc All Rights Reserved. See our User Agreement, Privacy Policy and Data Use Policy. The material on this site may not be reproduced, distributed, transmitted, cached or otherwise used, except with prior written permission of Futurism. Articles may contain affiliate links which enable us to share in the revenue of any purchases made.
Fonts by Typekit and Monotype.