A deal sweeter than a gun with a chainsaw. 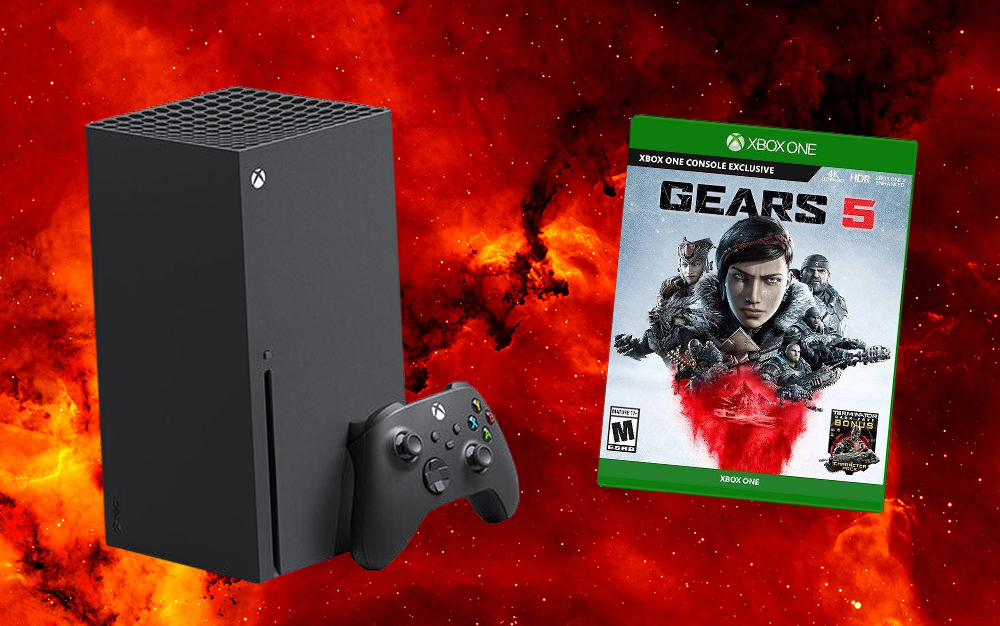 Xbox Series X is one of the best ways to game this generation, especially with exclusives like “Gears 5.” For a limited time, you can score a brand new Xbox Series X along with the hardcore, gory, alien-slaying title — and save $62. Read on to find out what’s included in this Xbox Series X Gears 5 Bundle Deal.

The Series X is the most powerful console in the Xbox line, and this model comes with an entire terabyte of hard drive space, to accommodate tons of the latest and greatest releases. Series X offers true 4K gaming, and in some cases, even offers 8K of dynamic range and up to 120 fps (frames per second). This bundles also offers true spatial sound, and one of the fastest interfaces out there. You know, the kind of specs you can typically only find on PCs. Alone, it’s a fantastic console. But with Xbox Game Pass, it’s a hardcore gaming workhorse.

Nintendo has Super Mario and Pokemon, Sony has Ratchet and Clank and Uncharted, and Xbox has Halo and Gears of War. The fifth entry in the popular series of third-person shooters takes place months after “Gears of War 4,” from the perspective of Kait Diaz, an outsider joining humanity in the fight against the locust horde. Whether you’re a veteran of the series or a complete newbie, “Gears 5” offers some seriously cinematic bug-slaying with the Lancer Assault Rifle, one of the coolest guns in video game history. It’s a great first game to use in your new Xbox Series X console.

Of course, each console comes with a new Xbox Wireless Controller, which works equally well on the Series X and PC alike. Supplies are limited so score this Xbox Series X Gears 5 Bundle Deal while you still can.

Read This Next
From the Dept. of Things to Buy
Amazon Just Announced Its First “Early Access Sale” — Here’s What You Need to Know
From the Dept. of Things to Buy
I Reversed Years of Heat Damage with the Shark FlexStyle Air Styling and Drying System
From the Dept. of Things to Buy
Save Hundreds on the Best Desktop Gaming PCs in September
From the Dept. of Buying Things
How to Stream "Thursday Night Football" on Amazon
From the Dept. of Things to Buy
Yes, GE’s $28 LED+ Smart Light Bulb Is Also a Bluetooth Speaker
More on Sci-Fi Visions
Roid Rage
Sep 21 on neoscope
Steroid Use Linked to a Bunch of Very Bad Brain Problems
Recipe For Disaster
Sep 21 on neoscope
FDA Warns Americans to Stop Cooking Chicken in NyQuil
From the Dept. of...
Sep 14 on futurism
Backbone’s One Controller Unlocks the iPhone’s True Gaming Potential
READ MORE STORIES ABOUT / Sci-Fi Visions
Keep up.
Subscribe to our daily newsletter to keep in touch with the subjects shaping our future.
+Social+Newsletter
TopicsAbout UsContact Us
Copyright ©, Camden Media Inc All Rights Reserved. See our User Agreement, Privacy Policy and Data Use Policy. The material on this site may not be reproduced, distributed, transmitted, cached or otherwise used, except with prior written permission of Futurism. Articles may contain affiliate links which enable us to share in the revenue of any purchases made.
Fonts by Typekit and Monotype.