What if Earth Really Were Hollow? 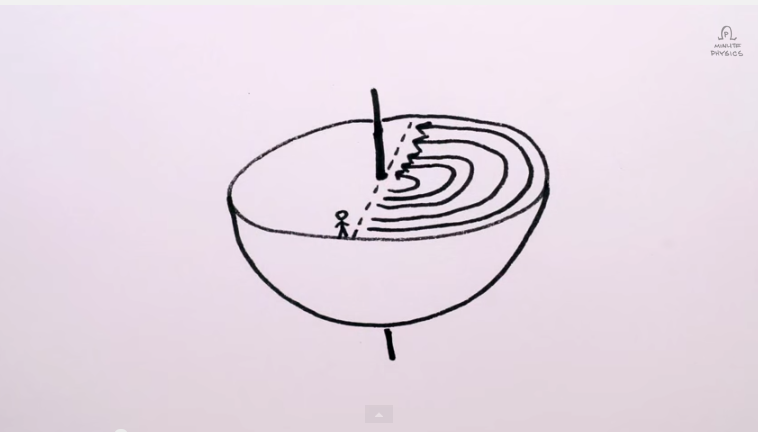 You've probably heard about the people who believe in the "hollow Earth hypothesis." Previously, in ancient times, the idea of subterranean realms seemed somewhat plausible, and the idea ultimately became intertwined with the concept of "places" (it was a bit like Copernicus' celestial spheres).

Then, in 1692, Edmund Halley developed an entire structure around this idea and put forth the idea that Earth consisted of a hollow shell about 800 km (500 miles) thick. In fact, he thought that the inside of our planet contained a whole series of these "shells," and that each has it's own atmosphere, water, and so on. Unfortunately, many of Halley's ideas persist even today.

Honestly, calling anything that references the hollow Earth today a true "hypothesis" is being a tad kind. Evidence that this is not how Earth actually is abounds. Here’s an image from the European Space Agency's (ESA) Gravity field and steady-state Ocean Circulation Explorer (GOCE) mission. It compiled many bits of data to come up with this realistic depiction of how gravity varies throughout the Earth.

As the ESA notes, "this resulted in a unique model of the 'geoid', which is the surface of equal gravitational potential defined by the gravity field." And as you can see in the top image, there is no hole anywhere to be found.

Still, it does afford an opportunity for an interesting physics question: What if our planet really was hollow? Well, the outer shell would collapse into the inner one. That's how gravity works. It "pulls" things towards the center of mass. There is absolutely no reason that the crust of the Earth would levitate. It's not a terribly interesting answer, but it's the correct one.

But if, for some strange reason, physics managed to create a world that consists of only an outer shell, well, things would not go so well for us. Depending on just how hollow it was, there probably wouldn't be enough gravity for us to stick to the planet.

That means that you, me, and everything else (including Earth's air) would float off into space...where we would meet our very unfortunate demise.

Why does this happen? HyperPhysics explains, "For a spherically symmetric mass, the net gravity force on an object from that mass would be only that due to the mass inside its radius, and that would act as if it were a point mass located at the center. When this is analyzed in detail, you find that the gravity at any radius r less than REarth will be linearly proportional to the distance from the center."

Here, MinutePhysics clarifies some of this and tackles a few other "what ifs."

Read This Next
Sundowned
Mexico Bans Startup From Future Solar Geoengineering Experiments
Knew It All Along
Exxon Scientists Knew About Global Warming for Decades While Company Denied It
Solar Slay
Solar Powered Machine Turns CO2 and Waste Plastic Into Valuable Fuel
Dim Sun for Breakfast
Startup Says It's Started Releasing Chemical Into Atmosphere to Dim Sun
Hidden City
NYC's Greenery Eats Up All the CO2 From Its Cars, Trucks and Buses "And Then Some"
More on Earth & Energy
The Dos and Do-Do...
1:59 PM on the byte
Startup Backed By "Jurassic World" Producer Says It Will Revive Extinct Dodo Using Complete Genome
Shark Smile
Yesterday on the byte
Influencer Fined for Eating Endangered Great White Shark
Imagine Dragons
Monday on the byte
Miners Say "Sorry" for Losing Highly Radioactive Object Along Highway
READ MORE STORIES ABOUT / Earth & Energy
Keep up.
Subscribe to our daily newsletter to keep in touch with the subjects shaping our future.
+Social+Newsletter
TopicsAbout UsContact Us
Copyright ©, Camden Media Inc All Rights Reserved. See our User Agreement, Privacy Policy and Data Use Policy. The material on this site may not be reproduced, distributed, transmitted, cached or otherwise used, except with prior written permission of Futurism. Articles may contain affiliate links which enable us to share in the revenue of any purchases made.
Fonts by Typekit and Monotype.