We May Have Finally Solved the Mystery of Solar Flares

We're finally figuring out the mysteries of the cosmos. 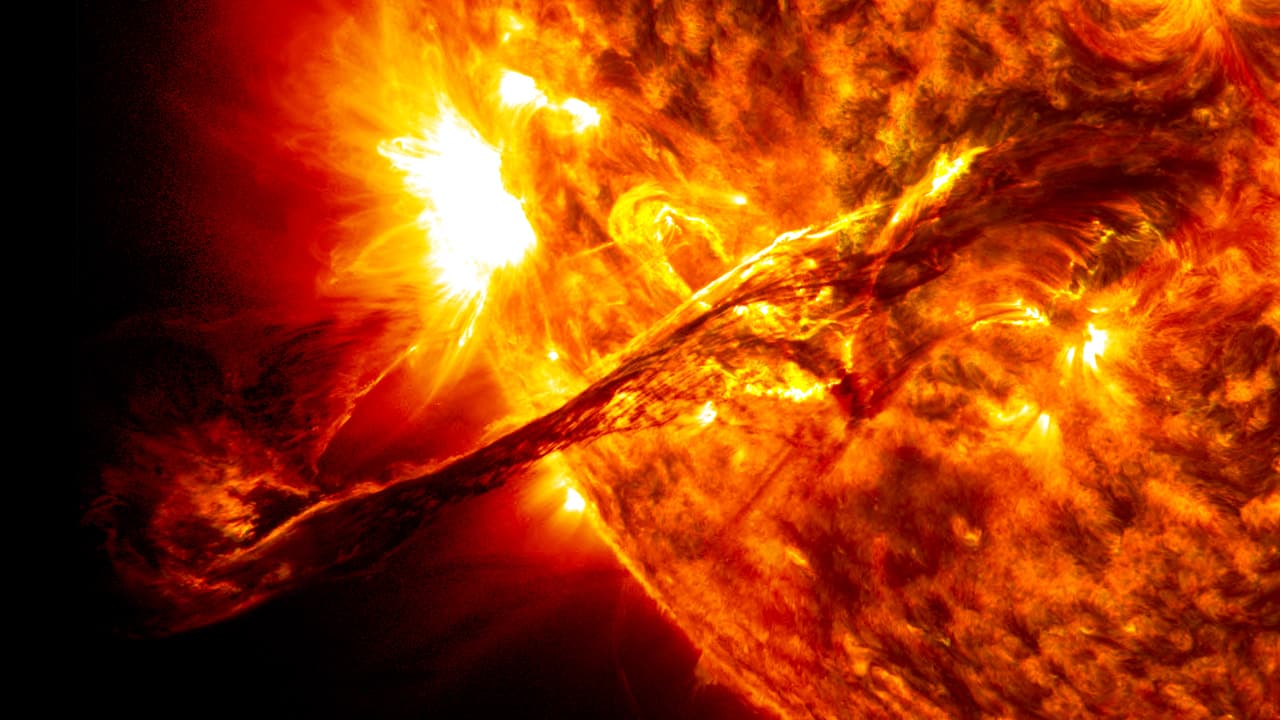 The sun is volatile, capable of unleashing huge amounts of plasma in outbursts that affect the space around it — including the space near Earth. There are two types of these solar eruptions: coronal ejections, which are smaller bursts of plasma, and coronal mass ejections (CMEs), which are large eruptions that release plasma and high-speed magnetic fields.

We know they happen, but we haven't really figured out how they happen. Now, thanks to researchers from the Durham University in UK and NASA's Goddard Space Flight Center, we have a theoretical model that could explain both types of coronal jets. According to their study, published in the journal Nature, both occurrences are the result of magnetic field lines in the surface of the sun, above the jets, breaking apart and rejoining.

"It was previously thought that there were different drivers for the varying scales of eruptions from the Sun, but our research provides a theoretical universal model for this activity, which is very exciting," lead researcher Peter Wyper from Durham said in a press release.

It's All About Prediction

Using this theoretical universal model, dubbed the "breakout model," the researchers believe that it may be possible to predict when solar flares will occur. As Wyper explained it: "A greater understanding of solar eruptions at all scales could ultimately help in better predicting the Sun's activity."

If proven, the breakout model could help us prepare for solar flares — particularly large-scale CMEs which are known to disrupt radio transmissions and satellite communications by sending huge amounts of electromagenetic radiation. They are tend to trigger aurorae in the Earth's poles. This phenomenon was last recorded in 1859, during what's now known as the Carrington Event. Such CMEs today could prove dangerous for astronauts in space. That being said, the next step is to confirm the breakout model using high-resolution observations of the solar atmosphere.

"Within a unified context, we can advance understanding of how these eruptions are started, how to predict them, and how to better understand their consequences," said Richard DeVore one of the researchers at NASA's Goddard Space Flight Center.

Read This Next
Futurism
New Evidence Has Emerged on the Potential for Life in the Trappist System
More on Off World
Stunning Centaur
Yesterday on the byte
James Webb Spots Asteroid With Its Own Saturn-Like Rings
Grrrrrrrr
Friday on the byte
Internet Erupts as NASA Spots Cartoon Bear on Surface of Mars
Gl1tc4
Friday on the byte
NASA Says Another James Webb Instrument Has Suffered a Glitch
READ MORE STORIES ABOUT / Off World
Keep up.
Subscribe to our daily newsletter to keep in touch with the subjects shaping our future.
+Social+Newsletter
TopicsAbout UsContact Us
Copyright ©, Camden Media Inc All Rights Reserved. See our User Agreement, Privacy Policy and Data Use Policy. The material on this site may not be reproduced, distributed, transmitted, cached or otherwise used, except with prior written permission of Futurism. Articles may contain affiliate links which enable us to share in the revenue of any purchases made.
Fonts by Typekit and Monotype.