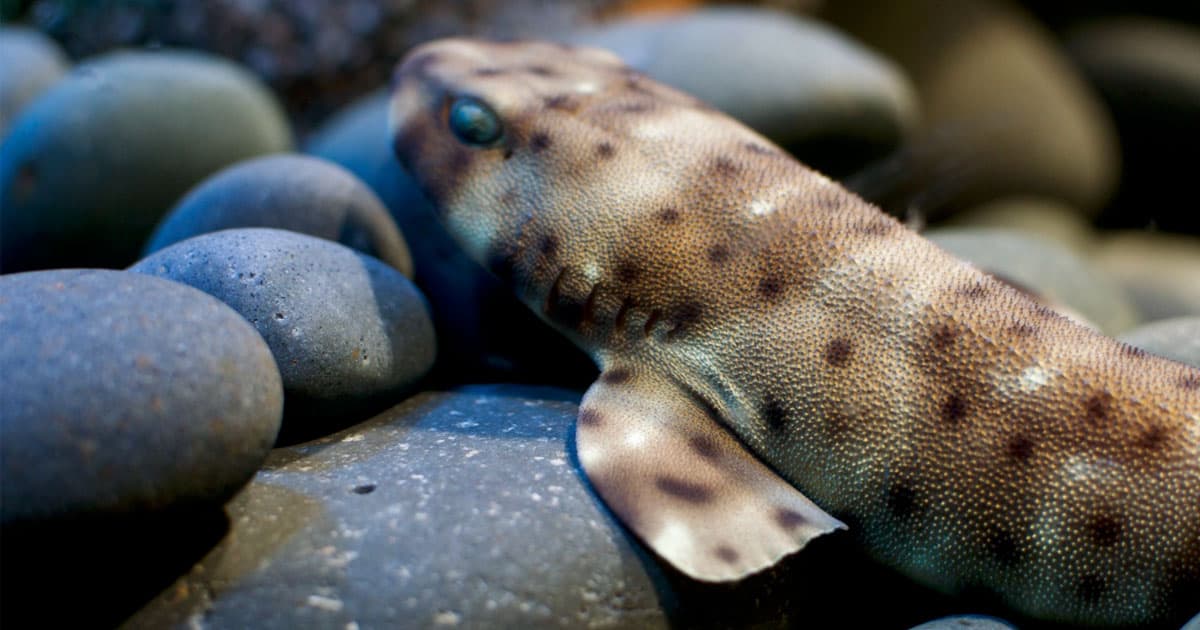 Do not panic when you read the following sentence: there are sharks that have developed legs who can walk on land.

No, this isn't a creature feature a la "Sharknado" or "Snakes on a Plane." This is real life evolution happening before our very eyes, and as researchers out of Australia and Florida have discovered in a new study, these surprisingly cute little guys are extremely fascinating.

To be fair, the "walking" that the epaulette shark does isn't anything like a bipedal human, or even like a cat, dog, or other mammal. Instead, they push up on their fins to elevate their bodies and then push them against flat surfaces to wriggle about. It's an awkward process, but it's an unmistakable sign of the lil critters locomoting outside of water, which is fascinating for many reasons — not the least being that our own distant ancestors once made the same transition.

.@ForrestGalante and his team filmed a leopard epaulette #shark leaving the water and walking onto land! 🚶🦈 #SharkWeek

Don’t miss Island of the Walking Sharks tonight at 8p ET on @discovery and @discoveryplus. pic.twitter.com/qgJbGDTP29

This isn't the first we've heard of the "walking" epaulette sharks — that was back in early 2020, when reports about these cuties noted that they were the most recently-evolved shark species known to science.

According to a press release from Florida Atlantic University, the low-oxygen nature of the epaulette shark's Great Barrier Reef home is likely why it's able to go up to two hours out of water.

Perhaps the most important of the FAU and Aussie researchers' findings, published in the journal Integrative and Comparative Biology, was the strange coherence in the lil sharkies' locomotor performance, or their ability to get from one place to another, during their development.

In an attempt to figure out just what makes the epaulette sharks able to swim in water and walk on land, the researchers studied baby epaulettes at various stages of development and found that even as the babies, known as "neonates," grew into "juveniles" and their bodies matured, they continued to "walk" in the same ways consistently. This was surprising because, as the researchers' note in their press release, babies have bulging bellies due to a nutritional yolk sac that they lose once they're old enough to forage for food on their own.

There's still lots to study — but as Marianne E. Porter, an associate biological sciences professor at FAU and the senior author of the paper notes, it may help uncover the secrets of how small animals deal not only with predators, but also with dangerous circumstances like those brought on by climate change.

"These traits also may be related to their sustained physiological performance under challenging environmental conditions," she said in the press release, "including those associated with climate change — an important topic for future studies."

We have a lot left to learn about these funny little dudes, but if they're going to be part of our future, we might as well start now.

More on sharks: Great, NASA Says That An Underwater Shark Volcano Has Erupted

Read This Next
Futurism
Whales and Sharks Are the New Victims of Our Plastic Waste, Study Finds
More on Earth & Energy
Shark Smile
Yesterday on the byte
Influencer Fined for Eating Endangered Great White Shark
Imagine Dragons
Monday on the byte
Miners Say "Sorry" for Losing Highly Radioactive Object Along Highway
Rock Battery
Jan 28 on the byte
Researchers Successfully Turn Abandoned Oil Well Into Giant Geothermal Battery
READ MORE STORIES ABOUT / Earth & Energy
Keep up.
Subscribe to our daily newsletter to keep in touch with the subjects shaping our future.
+Social+Newsletter
TopicsAbout UsContact Us
Copyright ©, Camden Media Inc All Rights Reserved. See our User Agreement, Privacy Policy and Data Use Policy. The material on this site may not be reproduced, distributed, transmitted, cached or otherwise used, except with prior written permission of Futurism. Articles may contain affiliate links which enable us to share in the revenue of any purchases made.
Fonts by Typekit and Monotype.