This is What the Universe Looks Like in One Image 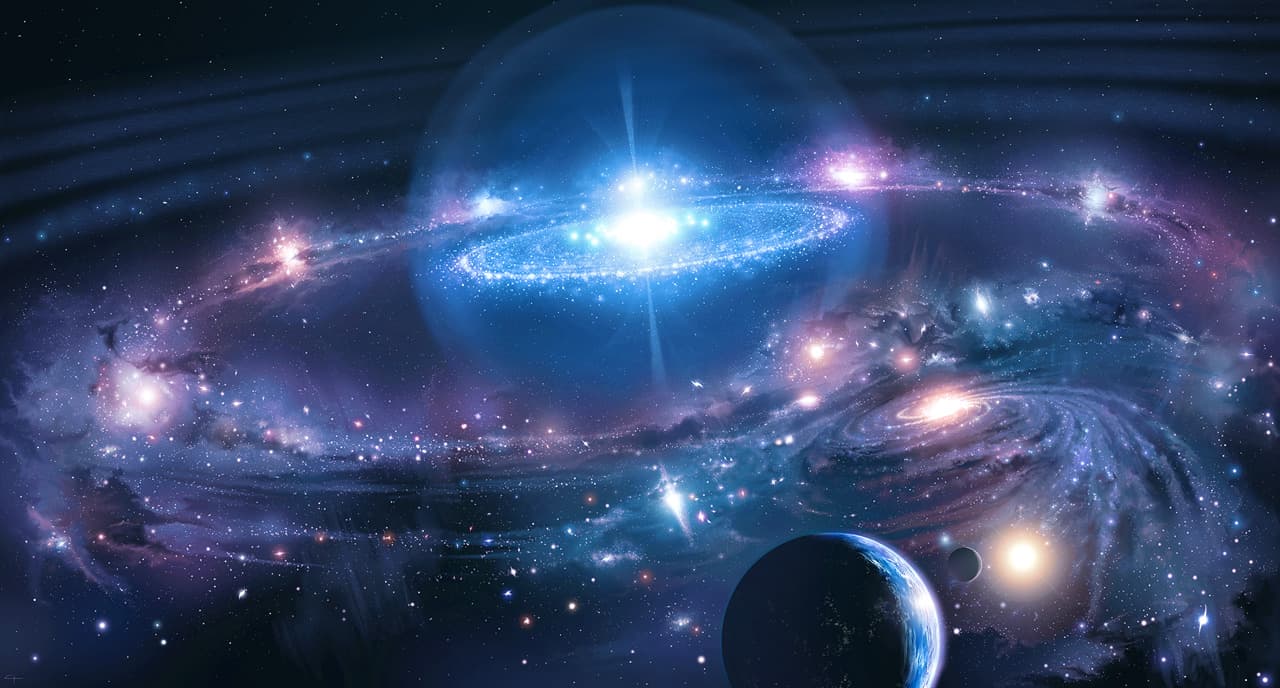 Image by Tribes of Creation

Try to imagine  planet Earth within the scope of the entire universe. It is rather hard to imagine; however, fortunately, you don't have to imagine it. Now, the advances in science and technology allow us to picture such a scene in its entirety.

Using logarithmic maps of the universe from Princeton and images from NASA, Pablo Carlos Budassi created an image that shows the observable universe in one disc.

The image is a solar system centric view of our universe. This essentially means that our Sun and Solar System are at the very center of the image. They are followed by the outer ring of our Milky Way galaxy, the Perseus arm (one of two major spiral arms of the Milky Way), a ring of other nearby galaxies like Andromeda, the rest of the cosmic web, cosmic microwave background radiation leftover from the big bang, and finally a ring of plasma that was also generated by the big bang.

This illustration is rather handy because, in short, logarithms allow us to comprehend large values.

Instead of showing all parts of the universe on a linear scale, each chunk of the disc represents a field of view several orders of magnitude larger than the one before it. That's why the entire observable universe can fit inside the circle.

And we need this, because the universe is very large. Roughly 13.75 billion years ago, our universe came into existence. Very shortly thereafter, primordial light started shooting across the cosmos and spreading throughout the cosmos. Since its inception, the cosmos has been growing at an ever increasing rate. Cosmologists estimate that the oldest photons that we can observe have traveled a distance of 45-47 billion light years since the big bang. That means that our observable universe is some 93 billion light-years wide (give or take a few light years).

Budassi was drawing hexaflexagons for his son’s birthday souvenirs when he started drawing central views of the cosmos. The idea of a logarithmic view came to him and he was able to create the image using Photoshop.

Read This Next
Futurism
Hubble Reveals That Our Universe Is Expanding Far Faster Than We Thought
More on Sci-Fi Visions
What is Happening
Feb 1 on the byte
Elon Musk Sets His Twitter Account to Private
From the Dept. of...
Jan 30 on futurism
The Best Humidifiers of 2023
Human v. Giraffe
Jan 24 on the byte
Chaotic Italian Fashion Line Baffles Facial Recognition Software
READ MORE STORIES ABOUT / Sci-Fi Visions
Keep up.
Subscribe to our daily newsletter to keep in touch with the subjects shaping our future.
+Social+Newsletter
TopicsAbout UsContact Us
Copyright ©, Camden Media Inc All Rights Reserved. See our User Agreement, Privacy Policy and Data Use Policy. The material on this site may not be reproduced, distributed, transmitted, cached or otherwise used, except with prior written permission of Futurism. Articles may contain affiliate links which enable us to share in the revenue of any purchases made.
Fonts by Typekit and Monotype.