Republicans and Democrats agree that nuclear energy can help in the fight against climate change.

We Agree on Nuclear Energy

United States senators Lamar Alexander from Tennessee and Sheldon Whitehouse from Rhode Island belong to two different parties. Lamar, who is the chairman of the Senate Appropriations Subcommittee on Energy and Water Development, is a Republican, while Whitehouse has been serving as a Democrat junior senator since 2007. Both, however, agree on a crucial thing: We need nuclear power to effectively fight global warming.

“We come from different political parties, but we agree on the overall goal of leveling the playing field for nuclear power, and the need to find a bipartisan solution to achieve it,” the pair writes in an article published by The New York Times.

Nuclear energy is generated either through fission, which is what’s currently available to us, or the elusive but potentially more powerful fusion. Fission is relatively clean and efficient. One fission event generates around 200 MeV of energy (about 3.2 x 10-11 watt-seconds), and it produces low carbon emissions, about 12 grams of CO2 per kWh. However, the process also creates radioactive nuclear waste, which carries its own environmental and health risks.

Currently, 99 active reactors are scattered across the country, providing low-cost and reliable electricity to the US — a nation that uses almost 20 percent of the world’s electricity despite accounting for only 4.4 percent of the global population. However, these reactors won’t be around for long.

“In roughly two decades, the United States could lose about half its reactors,” Alexander and Whitehouse explain. “That’s because, by 2038, 50 reactors will be at least 60 years old, and will face having to close, representing nearly half of the nuclear generating capacity in the United States.” This would greatly affect the country’s ability to reduce carbon emissions. 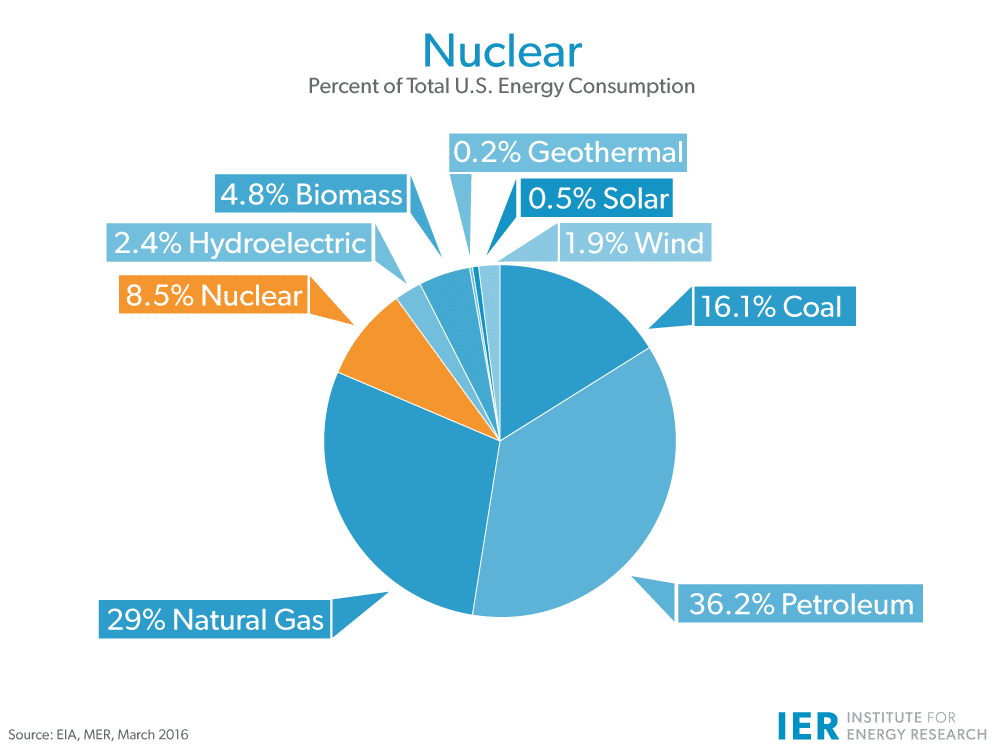 Alexander and Whitehouse lament the fact that, despite being obviously more efficient and clean, nuclear energy has been at a disadvantage in the renewable energy business:

Unfortunately, some of our federal policies to encourage clean energy, such as the Clean Energy Incentive Program within President Obama’s Clean Power Plan, do not explicitly include or incentivize nuclear power. Likewise, some states have chosen to adopt policies, such as renewable portfolio standards, that do not include or incentivize nuclear power. At the same time, our energy markets do not currently account for the value of carbon-free power, a failure that puts nuclear power at an unfair and economically inefficient disadvantage to fossil fuels like coal and natural gas.

The two senators agree that “it’s time for the United States to get serious about clean energy.” Among other things, this means “supporting safely operating nuclear power plants that produce carbon-free electricity.”

While various states and even some in the private sector are pushing to put nuclear energy at the forefront of anti-climate change efforts — which Alexander and Whitehouse say the government should support — they can’t do it alone. Policy-wise, the government should take a more active role in supporting a stronger nuclear energy sector. “For one thing, we should extend existing reactor licenses from 60 to 80 years, in cases where the Nuclear Regulatory Commission says it is safe to do so,” the senators write.

Some people might argue that the waste left behind by the process and the potential danger it poses make it difficult to accept nuclear energy as a truly viable clean-energy option. Alexander and Whitehouse think that those problems could be solved by investing in research for new reactor technologies:

We should also invest more in research to develop advanced nuclear reactors, including small modular reactors and accident-tolerant fuels. Advanced reactor designs may substantially reduce the threat of a meltdown. Many new, modular designs are much smaller than their predecessors, meaning they can be built in factories at lower cost and plugged into the grid as needed.

Whether or not increased investment in nuclear power is the answer, it’s good to see those in the U.S. government putting party politics aside to address this very real problem of carbon emissions.

“Radioactive Gobstoppers” Could Stop the Next Nuclear Reactor Meltdown