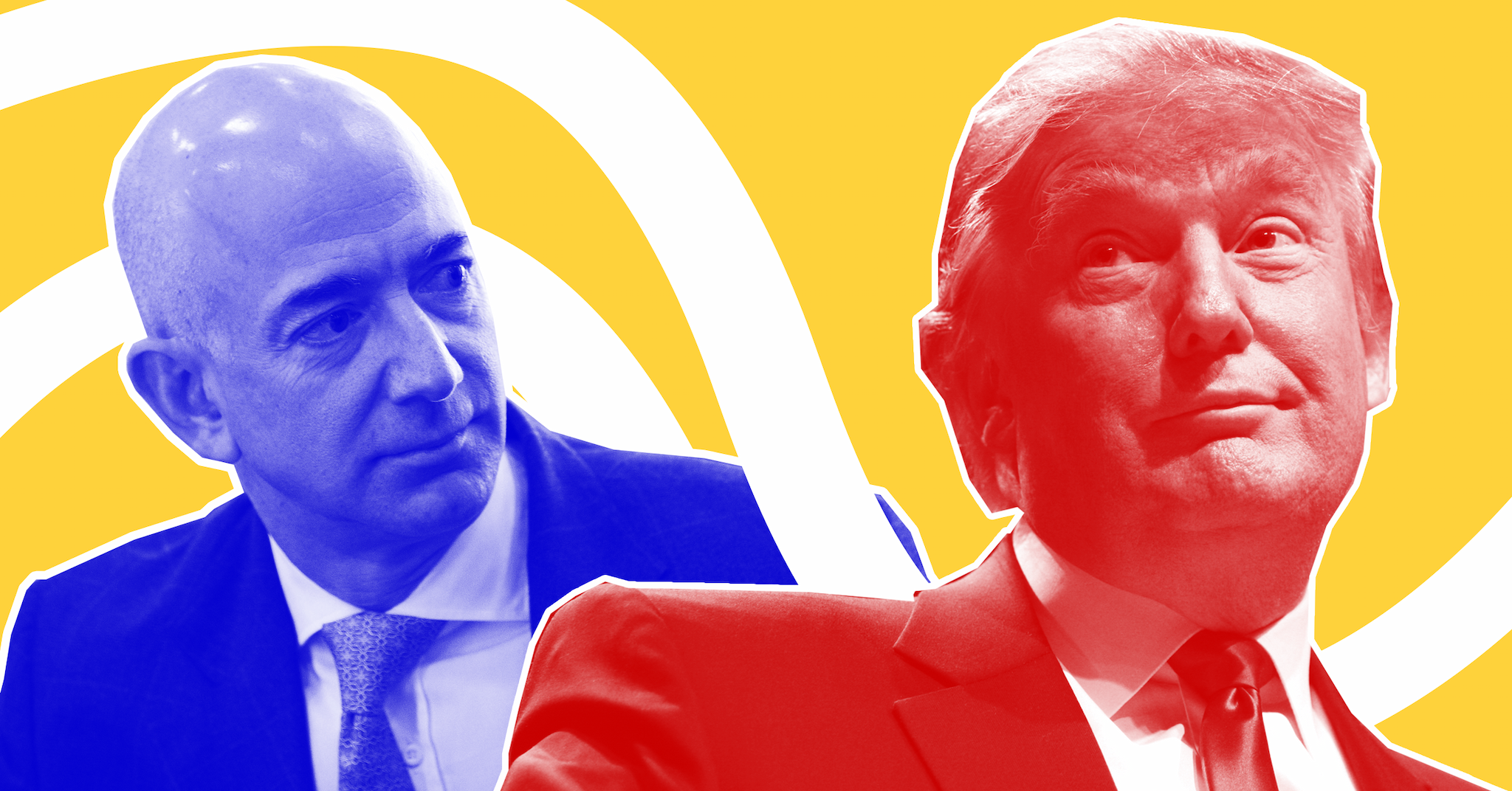 If you're the kind of person who gets up in the morning wondering what kind of mischief the American President got up to on Twitter while you were sleeping, first, seek help. Also, congrats, you got a fresh batch of Rage at Amazon Dot Com again, today.

The (apparently one-sided) Trump-Bezos Feud has been going on for years, but continues to heat up as Donald Trump...continues to live in the White House.

Refresher: Axios reported the most recent rumblings of Trump's obsession with (and resentment of) the company. Several people privy to the matter noted that POTUS was interested in going after the company wielding anti-trust laws.

But it wasn't clear whether this was because of some of Amazon's actual practices, or perhaps because Jeff Bezos, the Amazon CEO, also happens to own the Washington Post. And as usual, there's no better way to gain insight into the President's mindset (and foreign policy decisions, and White House hiring) than Twitter:

I have stated my concerns with Amazon long before the Election. Unlike others, they pay little or no taxes to state & local governments, use our Postal System as their Delivery Boy (causing tremendous loss to the U.S.), and are putting many thousands of retailers out of business!

The ire that some heads of state reserve for terrorists or enemies of the state is now being allotted by Trump to Bezos and his world-dominating corporate powerhouse.

In classic Trump fashion, the facts aren't exactly on his side. Amazon's been paying taxes in California since 2012, and charged customers in all other states, according to the New York Times. And instead of taking advantage of the U.S. Postal Service, Amazon's actually one of the few reasons the embattled agency is still around, the Wall Street Journal reports.

That's not to say Amazon doesn't have its problems. Its warehouse employees are systematically stressed and overworked. And that goes without mentioning that whole worker-tracking wristband thing. Among other things. So far, the only fallout from Trump's Tweets is Amazon's stock taking a dip in the past few days. It's anyone's guess as to whether those drops will affect the company in the long term (or if this is all Trump wants to accomplish with his bluster).

Not that it matters. Trump's going to keep doing his thing, to whatever aim he has (or whatever has his attention-deficit-addled Eye of Sauron at any given moment). In other words: Just another Friday in 2018.

Read This Next
Wait Wait
Elon Musk Has a Ridiculous Excuse for Why He Suddenly Doesn't Want to Buy Twitter
Musk Gonna Musk
Experts Say That Elon Musk Has No Idea How Math Works
Dark Musk
The Dark Reason Elon Musk Is Trashing His Own Newest Employees
Dealbreaker
Shocker: Elon Musk's Twitter Deal May Already Be Falling Apart
Hateraide
Twitter Says It Might Start Allowing Hate Speech
More on Future Society
Vatican Vagrant
Yesterday on the byte
Elon Musk Takes Flabbergastingly Awkwardly Picture With the Pope
Movie Magic
Yesterday on the byte
Robots Now Delivering VR Porn Headsets to the Terminally Lonely
McDoom
Yesterday on the byte
Sorry Folks, That Photo of Doom Running on a McDonald's Kiosk Is Fake
READ MORE STORIES ABOUT / Future Society
Keep up.
Subscribe to our daily newsletter to keep in touch with the subjects shaping our future.
+Social+Newsletter
TopicsAbout UsContact Us
Copyright ©, Camden Media Inc All Rights Reserved. See our User Agreement, Privacy Policy and Data Use Policy. The material on this site may not be reproduced, distributed, transmitted, cached or otherwise used, except with prior written permission of Futurism. Fonts by Typekit and Monotype.