These Fifteen New Spiders Were Named for Celebrity Activists, Including Bernie Sanders

The discovering team named the arachnids for champions of human rights and the environment. 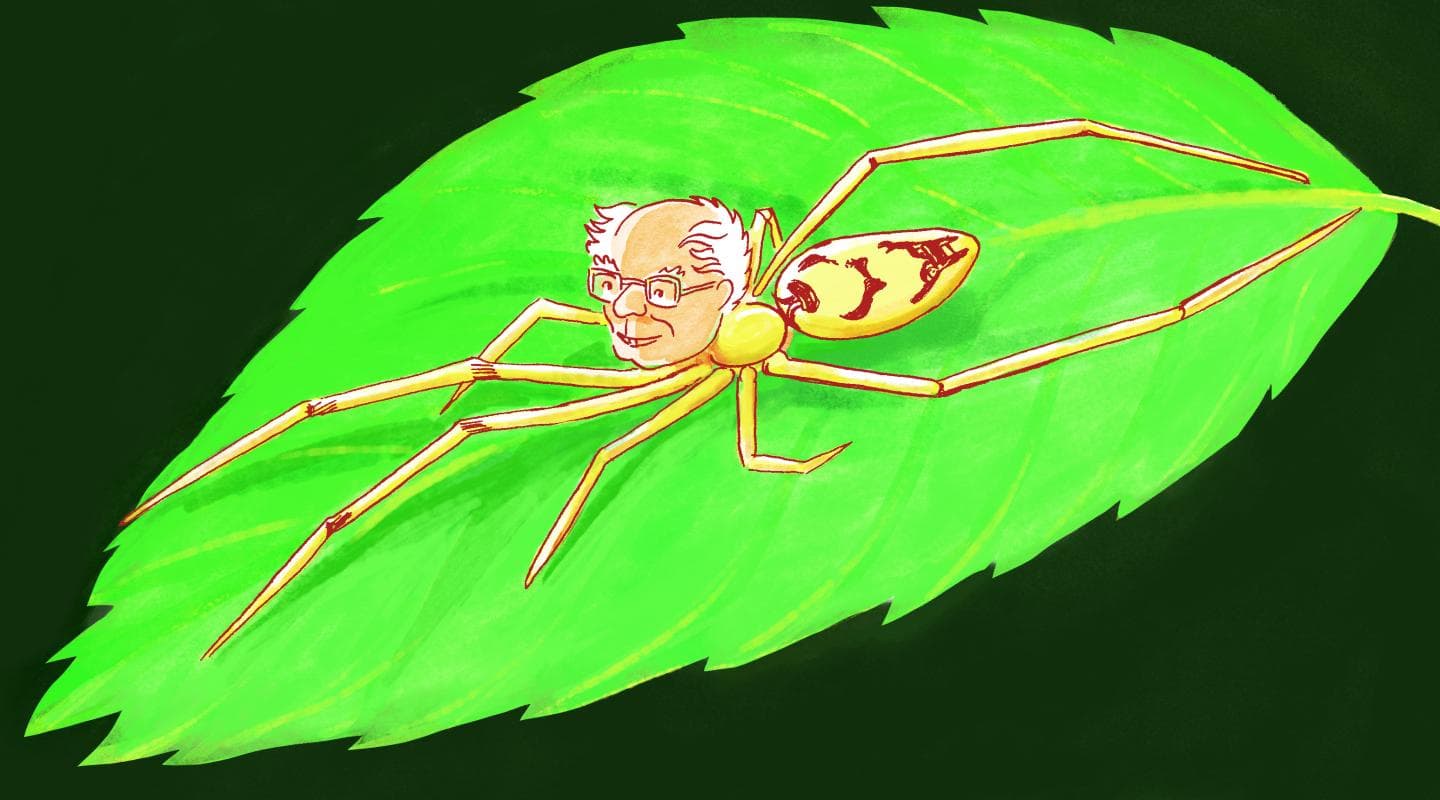 Currently, there are approximately 35,000 named species of spiders worldwide, but many scientists believe that this number makes up only about half of the total Earthly spider population. To those of you less than fond of our eight-legged neighbors, a recent discovery of 15 new spider species might either reinforce your fears or sway you to the side of the arthropods.

Ingi Agnarsson, an arachnid expert and professor of biology at the University of Vermont (UVM), led a team of four undergraduate students in the discovery of these 15 species, which are found in the Caribbean, Mexico, Central America and the southern United States. What makes this discovery doubly remarkable is the creativity that went into naming these creatures.

Just a few of the scientific names of the spiders are as follows: Spintharus davidattenboroughi, S. barackobamai, S. michelleobamaae, and S. berniesandersi as well as S. davidbowiei and S. leonardodicaprioi. As you might have guessed, these spiders were named after David Attenborough, Barack Obama, Michelle Obama, Vermont Senator Bernie Sanders, David Bowie, and Leonardo DiCaprio.

The big question here may be: why? Why choose celebrity names?

Agnarsson explained, "In naming these spiders, the students and I wanted to honor people who stood up for both human rights and warned about climate change—leaders and artists who promoted sensible approaches for a better world." In other worlds, the team highlighted those who have stood up for the planet and its residents by making them an everlasting part of nature itself.

The Spinarthus genus was previously thought to be a single species, one that had already been identified. But the team used a combination of photography, lab work, and painstaking analysis to set the new variations apart, dividing it into fifteen species endemic to each region studied.

Being a Vermont-based team, the love for Bernie may have gone without saying. Lily Sargeant, a researcher on the team stated that "Our time on this earth is limited...But I think that ideas are not that way. It is my hope that through naming that spider after Bernie we can remember the ideas that he has at this pivotal point in the life of our nation."

Others, namely recent UVM graduate Chloe Van Patten, were motivated by a love for Leonardo DiCaprio: "I'm over my crush, but now that he's involved in environmental issues, I love him even more. So I named a spider after him hoping that if he read our study...he might go out to dinner with me and talk about climate change."

The creativity involved in this naming could inspire more students and researchers to make research relateable. Not to mention, with so many more species to discover, the rise of celebrity arachnids could continue on. As Agnarsson remarked, "if we keep looking, we're sure there are more."

Read This Next
Sundowned
Mexico Bans Startup From Future Solar Geoengineering Experiments
Knew It All Along
Exxon Scientists Knew About Global Warming for Decades While Company Denied It
Solar Slay
Solar Powered Machine Turns CO2 and Waste Plastic Into Valuable Fuel
Dim Sun for Breakfast
Startup Says It's Started Releasing Chemical Into Atmosphere to Dim Sun
Hidden City
NYC's Greenery Eats Up All the CO2 From Its Cars, Trucks and Buses "And Then Some"
More on Earth & Energy
Brave <3
Yesterday on the byte
Bill Pledges to Keep Flying Private Jet While Speaking Out Against Climate Change
Sowloon Walled City
Yesterday on the byte
China Growing Pigs in Huge High Rise Buildings
Crust Punk
Yesterday on the byte
Scientists Discover Molten Hell Zone Beneath Earth's Tectonic Plates
READ MORE STORIES ABOUT / Earth & Energy
Keep up.
Subscribe to our daily newsletter to keep in touch with the subjects shaping our future.
+Social+Newsletter
TopicsAbout UsContact Us
Copyright ©, Camden Media Inc All Rights Reserved. See our User Agreement, Privacy Policy and Data Use Policy. The material on this site may not be reproduced, distributed, transmitted, cached or otherwise used, except with prior written permission of Futurism. Articles may contain affiliate links which enable us to share in the revenue of any purchases made.
Fonts by Typekit and Monotype.