There Was Just A $79 Million Cryptocurrency Heist

A cryptocurrency's ethereum blockchain has just been hacked.

When the Decentralized Autonomous Organization (DAO) began its experiment in crowdsourced investing, the initiative managed to raise over $150 million in ether. Ether is a form of cryptocurrency that is now gaining traction, rivaling the more popular bitcoin.

The valued ether was then stored on the ethereum blockchain, while DAO decided on how to best make use of the funds. However, now reports have surfaced which assert that chunks of the ether began to be moved from the DAO’s address.

And the ether heist has had an effect on the value of bitcoin, which dropped by 6%. 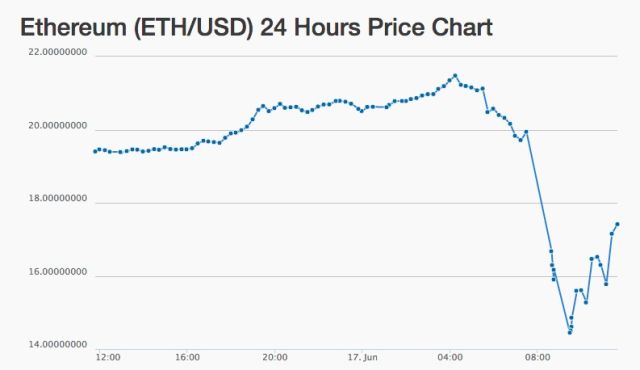 Unsurprisingly, cryptocurrency markets are currently panicking. The DAO ether represents over 10% of the ether available in circulation, and this hack is essentially on par with a heist at major financial institution. To assess the gravity of this heist, consider the $81 million online heist of the Bangladesh central bank. During this event, the SWIFT messaging network that is used in order to bridge major financial institutions globally was exploited.

However, the DAO could address the problem. “Ethereum’s miners, who decide what transactions form the cryptocurrency’s permanent record, can collectively agree to do a ‘rollback,’ rewinding the ethereum blockchain to some point before the hack happened,” notes Stephan Tual. Such alterations have happened previously. Notably, in 2010 there was a change in order to fix a glitch.

An update has since been posted to the DOA message board noting that the funds are now secure: “The funds are safe – We will inform you soon how things will continue,” writes FelixA. More information will be forthcoming.

Experts Say Now Is the Time to Invest in Crypto, and eToro Makes It Easy