The Marantz Model 40n: An Audiophile Amp for the Streaming Age

This vintage-inspired showpiece is thoroughly modern. 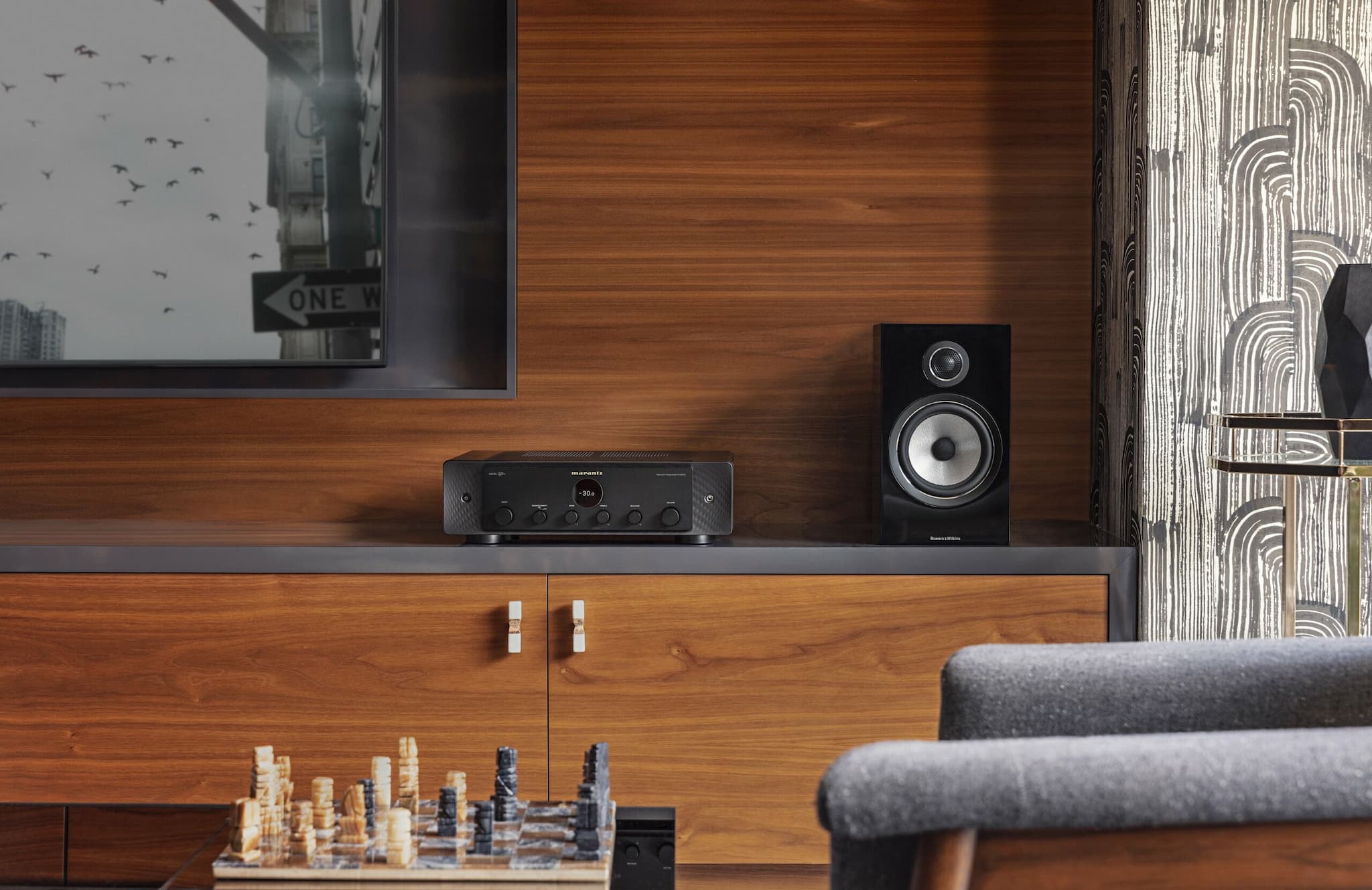 From long before Spinal Tap’s Nigel Tufnel “turned it up to 11,” the amp has occupied a central place for musicians and music lovers alike. Now audio pioneer Marantz has reimagined the amp for the digital age, while keeping its vintage feel.

The US-based company just announced the Model 40n, an integrated amp with wireless streaming features. The amp retails for $2,499, and will be available through select stores starting next month. Futurism recently had the opportunity to attend a demo of the Model 40n, during which it was used to play music from a turntable, TV, and streaming service. Our time with the amp lasted roughly one hour, and we walked away pleased by what we heard.

The Model 40n was designed to reduce the complexity and cost typically associated with audiophile equipment. Traditionally, a high-end audio setup would require a preamplifier for your turntable, and a power amplifier or stereo receiver to send audio from a source (think CD player or TV) to a set of speakers. The Model 40n handles all of those functions, and it's small enough to fit on the shelf of a media console.

The first thing that struck us during our all-too-brief time with the Model 40n was its look. The circular "porthole" screen on its face displays the currently selected input. It looks futuristic, despite being a throwback to the company's Model 9 amp, which was originally released in 1960. It's a cool touch that's both visually appealing and totally functional. The knobs on either side of the Model 40n's display allow you to adjust the volume, balance, and EQ (bass and treble) without a remote.

This dedication to audio excellence and pleasing sound are baked into the company’s DNA. Saul Marantz, the company’s founder, started by hand-building audio equipment at his home in Kew Gardens, Queens. While the company has grown and changed hands over the decades, Marantz continues to follow Saul’s original vision. Hearing the Model 40n only a few miles from the company’s original headquarters felt like a homecoming.

The backside of the Model 40n, which you can see in the image below, contains a surprising variety of inputs. This amplifier can be connected to a radio antenna, turntable, CD player, and TV at the same time, with plenty of RCA inputs to spare. We appreciate this level of flexibility because it allows the Model 40n to adapt to your lifestyle. You may only need an amp for your turntable today, but if you decide to set up a home theater system a couple of years down the line, the Model 40n is ready.

Bear in mind that this is a stereo amplifier, which means it's designed to work with two speakers, with the option to add a subwoofer for extra bass. The Model 40n doesn’t work with 5.1 or Dolby Atmos surround-sound speaker setups. That may seem like a limitation, but it's in line with the idea of the Model 40n being a compact, all-in-one stereo system. In our experience, this integrated amp — plus a pair of excellent speakers —  provided a surprisingly immersive experience when watching movies, which is typically when surround sound systems matter the most.

We were shown clips from Jurassic World: Fallen Kingdom, Ford Vs. Ferrari and A Star Is Born during Marantz's closed-door press presentation, and all three sounded incredible. The first two clips demonstrated the Model 40n's ability to elicit small elements in a scene (like flies buzzing in a forest, or individual blinds closing) that lesser audio equipment wouldn't be able to capture. In the case of A Star Is Born, the concert scene featuring Ally (played by Lady Gaga) getting over her fears and taking the mic faithfully recreated the sensation of standing in the audience at a show, complete with reverb and echo you'd hear live.

It's common for high-end audio companies to dismiss music streaming in favor of pandering to listeners who exclusively enjoy physical media, but Marantz designed the Model 40n to appeal to everyone. It supports AirPlay 2, Bluetooth, and WiFi with HEOS, so you can wirelessly stream audio to your system from any device. This will work regardless of which streaming music service you subscribe to. Many streaming services have begun to adopt lossless (CD-quality) and high-resolution (better than CD-quality) streaming, and the Model 40n is equipped to handle both. It can natively play 24-bit audio files at sampling rates up to 192kHZ, and supports Double-Rate DSD (Direct Stream Digital) files up to 5.6Mhz.

The best part is that the Model 40n can provide an excellent listening experience regardless of your familiarity with the minutiae of bit rates and sampling sizes. If you have a playlist you enjoy on Spotify or Apple Music, or want to play a live concert archived on YouTube, all you have to do is connect to this amp and hit play. If you do seek out the best-possible mastering of your favorite albums on Super Audio CD, Blu-Ray Audio, or other niche formats that allow you to play high-resolution audio files, the Model 40n will reward your investment by eliminating any loss of fidelity between your source and speakers.

That was borne out during the second and third stages of Marantz's Model 40n demo, which included listening to cuts from LPs played on a high-end turntable, and locally steamed files from a playlist. Marantz made a point to stage the LP demo using a set of floor-standing speakers and the streaming demo using bookshelf speakers to demonstrate how well its amp performed in both scenarios. The Model 40n easily passed both tests, providing rich, ear-pleasing sound regardless of the genre of music or format.

Marantz is able to satisfy every type of listener because of its Sound Masters, audio engineers whose sole role within the company is to make sure its gear sounds as good as possible. That could mean tweaking a component's tuning, or providing feedback on the hardware. The Model 40n is designed around Marantz's custom-built Hyper-Dynamic Amplifier Modules, which means it'd be impossible for other companies to copy its sound profile.

Again, this under-the-hood hardware and strict testing are completely invisible, which means you never have to think about whether you're using a setting that's negatively impacting the sound of your music or movies. That said, the fact that Marantz built bass and treble knobs onto the front of the Model 40n shows that the company wants to leave the subjective nature of "good sound" in your hands. We'll withhold our full judgment of the Model 40n until we've had a chance to test it for an extended period of time, but our first impressions were very good.

We further explain how we test audio gear here.