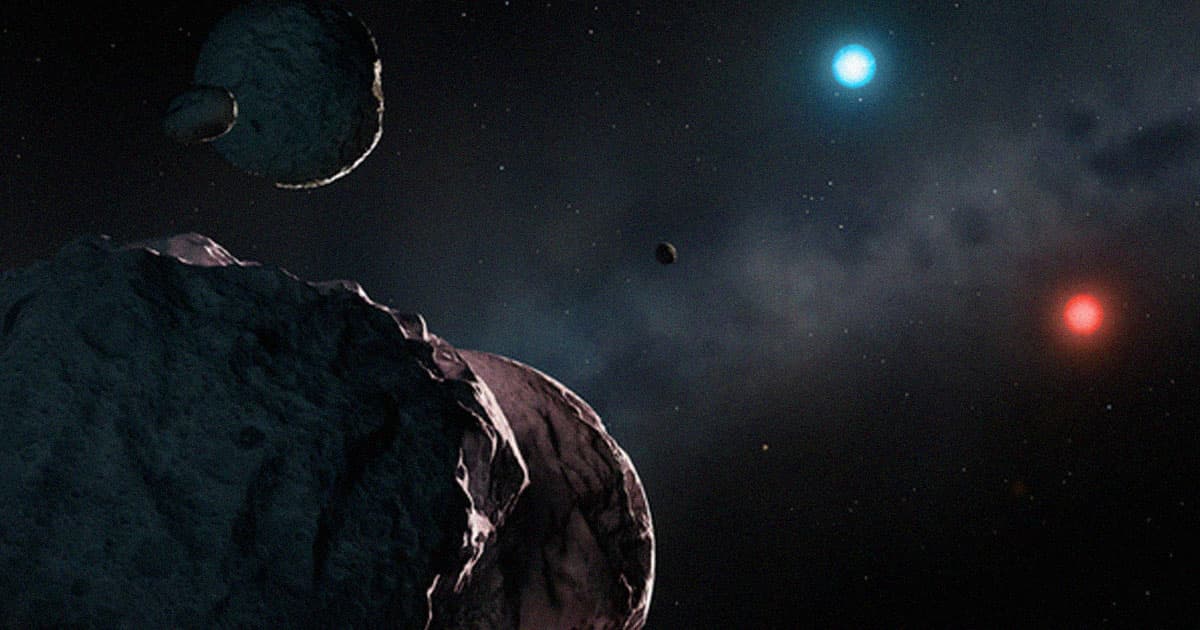 Astronomers Find Wreckage of Destroyed Solar System Right Near Our Own

"We're finding the oldest stellar remnants in the Milky Way that are polluted by once Earth-like planets."

"We're finding the oldest stellar remnants in the Milky Way that are polluted by once Earth-like planets."

Astronomers have spotted something gruesome in our cosmic backyard: a star system that used to have terrestrial planets like our own, except that all that remains now are the ancient, obliterated vestiges of those bygone worlds.

The ancient star at the center of it all — designated WDJ2147-4035, and described in a new study published in the Monthly Notices of the Royal Astronomical Society — is what's known as a white dwarf, and it's only 90 light years away. White dwarfs are fascinating stellar remnants, and the end state for most stars in the universe after they burn through all their fuel. That's particularly interesting because our own Sun is predicted to eventually become a white dwarf, meaning this ravaged system could be a preview of the fate of our own.

"We're finding the oldest stellar remnants in the Milky Way that are polluted by once Earth-like planets," said study lead author Abbigail Elms, a PhD student at the University of Warwick, in a statement. "It's amazing to think that this happened on the scale of ten billion years, and that those planets died way before the Earth was even formed."

By using spectroscopic and photometric data from Gaia, the Dark Energy Survey, and the European Southern Observatory's X-shooter instrument on the Very Large Telescope, the astronomers determined that WDJ2147-4035 is around 10.7 billion years old — and it's spent 10.2 billion years of that lifespan cooling off.

In addition, the data allowed the astronomers to determine the white dwarf's composition, and discovered traces of sodium, lithium, potassium, and possibly even carbon — relics of an unfathomably old planetary system that survived the star's shrinking into a white dwarf.

Another white dwarf, WDJ1922+0233, was also the subject of analysis in the study. And intriguingly, Elms and her team found that the star is polluted by materials with a similar composition to the Earth's continental crust.

"These metal-polluted stars show that Earth isn't unique, there are other planetary systems out there with planetary bodies similar to the Earth," Elms said.

The revelations from both white dwarfs provide a captivating look at the formation of rocky planets early in the universe when metals were less abundant. Above all, it's also a portal into the eventual ruin of our own solar system.

Eyes Up Here
New AI Is Peering Into the Nuclear Cores of Distant Stars
11. 16. 18
Read More
X-Ray Study Shows Older Stars May Be More Supportive to Life
9. 13. 17
Read More
Scientists Just Discovered Molecules that Could Tell us the Origins of Our Galaxy
8. 30. 17
Read More
+Social+Newsletter
TopicsAbout UsContact Us
Copyright ©, Camden Media Inc All Rights Reserved. See our User Agreement, Privacy Policy and Data Use Policy. The material on this site may not be reproduced, distributed, transmitted, cached or otherwise used, except with prior written permission of Futurism. Articles may contain affiliate links which enable us to share in the revenue of any purchases made.
Fonts by Typekit and Monotype.