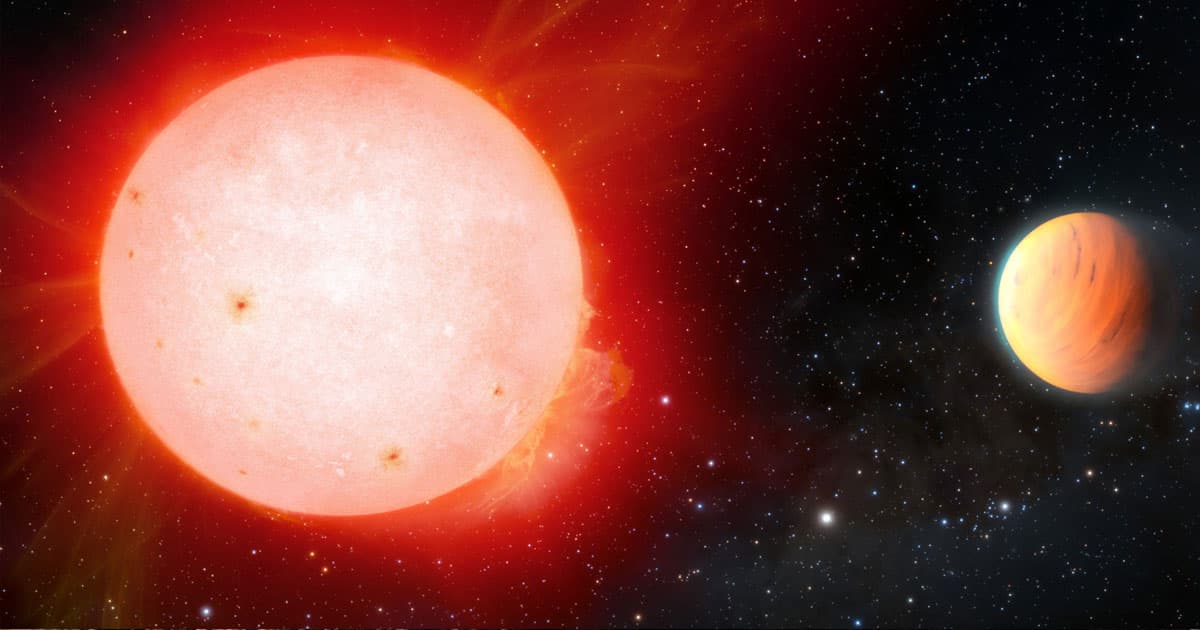 Its surface is pretty toasty, too.

Its surface is pretty toasty, too.

Astronomers at the Kitt Peak National Observatory have spotted a peculiar gas giant exoplanet some 580 light-years away with the density of a marshmallow.

And as it turns out, it may be the lowest density planet discovered to date, according to a new study published in The Astronomical Journal, surprising the astronomers.

The planet, TOI-3757b, is pretty toasty, too, tightly orbiting a nearby red dwarf star. Red dwarfs are small stars that still sustain nuclear fusion reactions at their core.

They gain their distinct red appearance due to the relatively low surface temperatures compared to other stars like our Sun.

Yet, because of how volatile their surfaces can be, it's unusual for a gas planet to form in orbit of a red dwarf, since destructive events like solar flares can easily destroy a planet's atmosphere.

"Giant planets around red dwarf stars have traditionally been thought to be hard to form," said study lead author Shubham Kanodia, a researcher at the Carnegie Institution for Science, in a press release.

"So far this has only been looked at with small samples from Doppler surveys," he continued, "which typically have found giant planets further away from these red dwarf stars."

But Kanodia and his team have a couple of ideas on how this planet was formed.

For one, they point to the planet's rocky core. They believe that the lower abundance of heavy elements in the star could indicate that the core may have formed more slowly, delaying the nascent star's amalgamating of gas and therefore lowering its density in the long run.

But it could also be a result of a slightly wonky orbit. As of now, astronomers believe that the gas giant's orbit is slightly elliptical. That means at certain points it flies a little too close to its sun, causing it to overheat and expand in the process, not unlike a burnt marshmallow.

For follow up observations, the astronomers hope they'll get the chance to point NASA's James Webb Space Telescope at the rarefied planet and other exoplanets like it.

"Finding more such systems with giant planets — which were once theorized to be extremely rare around red dwarfs — is part of our goal to understand how planets form," Kanodia said.