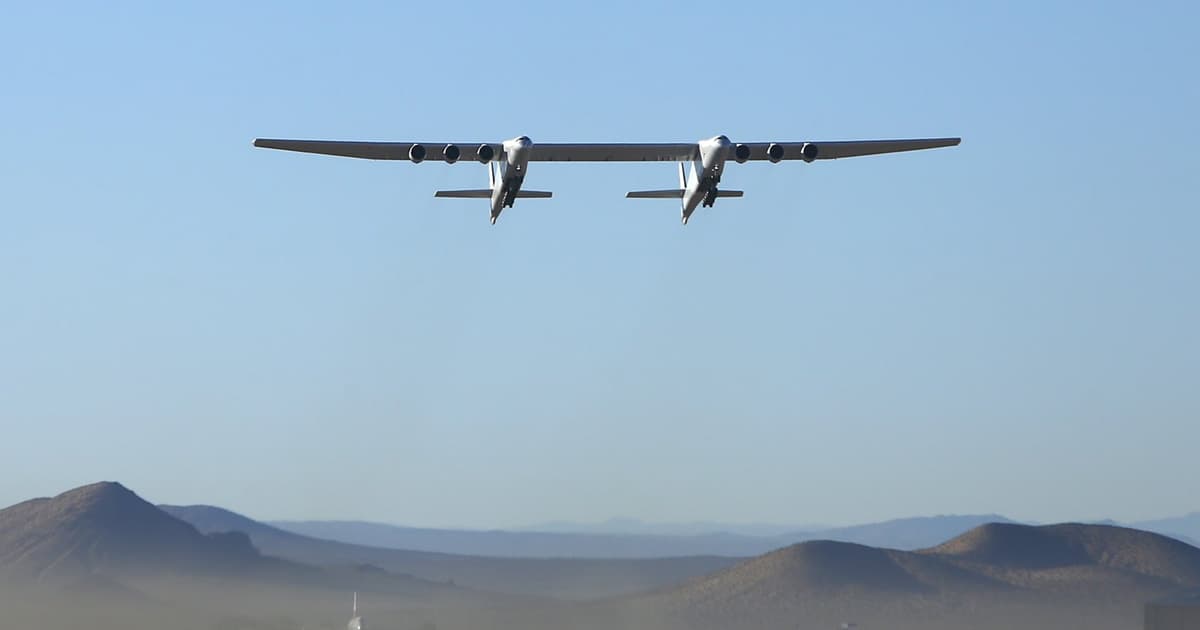 Watch the World's Largest Aircraft Take Off in the Desert

This thing is a beast.

This thing is a beast.

Aerospace company Stratolaunch has managed to get its Roc aircraft off the ground for the second time this morning.

The twin-fuselage aircraft, currently the jet with the world's widest wingspan at a colossal 385 feet, took to the skies over the Mojave desert in Southern California at about 7:30 am local time.

Journalists at the scene were able to witness the impressive launch first hand from the sidelines, a testament to the cutting edge of aerospace engineering.

Stratolaunch's Roc, the world's largest airplane (and built to launch rockets), just took off for its second ever test flight: pic.twitter.com/v60OhFRJa8

The gigantic plane is designed to launch more than one hypersonic rocket from a high altitude. Rockets being released from these heights require far less fuel to get into orbit.

The flight test is going well. All results are as expected. pic.twitter.com/TrvqtVFulD

A reusable hypersonic prototype vehicle capable of Mach 6 flights, called the Talon-A, is already in development.

The left fuselage is uncrewed, while the right fuselage accommodates both the pilot and the co-pilot. It's powered by six used Boeing 747 engines and weighs in at 500,000 pounds.

The beast was first shown off back in 2017 by Stratolaunch founder (and Microsoft co-founder) Paul Allen.

It successfully completed its maiden voyage in 2019.

"The flight itself was smooth, which is exactly what you want a first flight to be," test pilot Evan Thomas told The Verge at the time, adding, "it flew very much like we had simulated and like we predicted."

These Are Some of the Biggest Moonshots Alphabet Ever Attempted
6. 30. 17
Read More
This New Plane Will Make the First Ever Carbon-Free Flight Across the Atlantic
3. 16. 16
Read More
Shark Smile
Influencer Fined for Eating Endangered Great White Shark
Yesterday
Read More
+Social+Newsletter
TopicsAbout UsContact Us
Copyright ©, Camden Media Inc All Rights Reserved. See our User Agreement, Privacy Policy and Data Use Policy. The material on this site may not be reproduced, distributed, transmitted, cached or otherwise used, except with prior written permission of Futurism. Articles may contain affiliate links which enable us to share in the revenue of any purchases made.
Fonts by Typekit and Monotype.