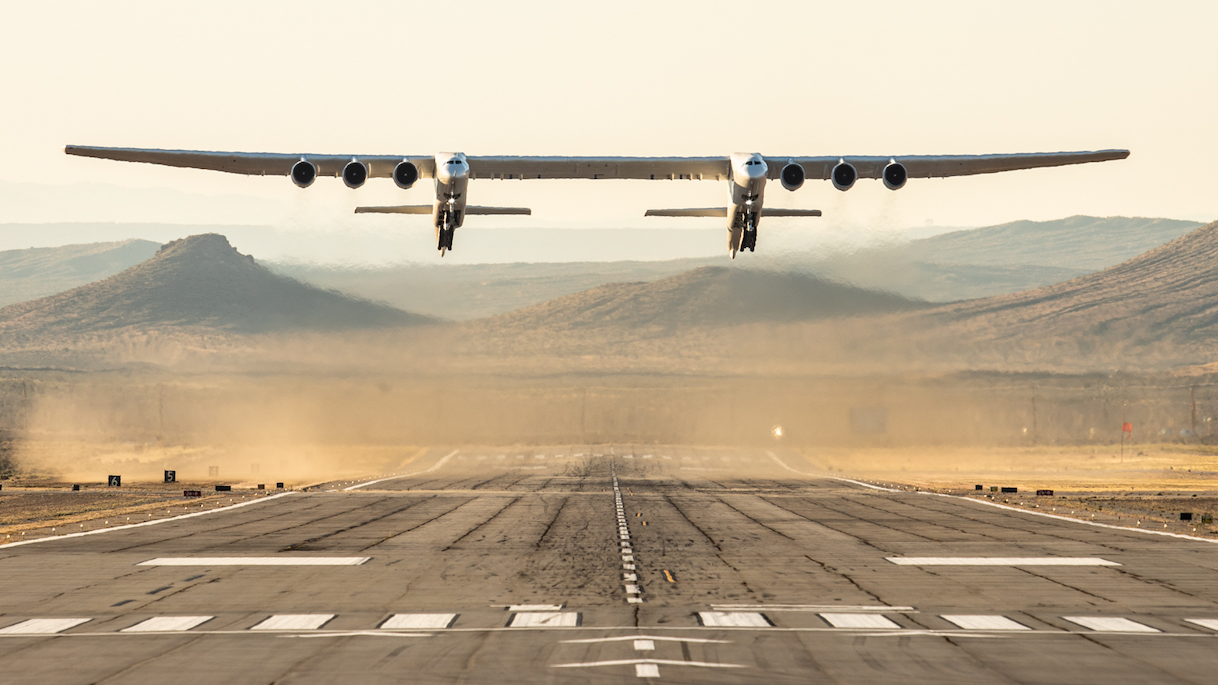 Its wingspan is greater than the length of a football field.

Its wingspan is greater than the length of a football field.

An airplane with a wingspan greater than the length of a football field just flew for the first time — putting us one step closer to more affordable spaceflight.

The largest airplane in the world, the Stratolaunch, took off from Mojave Air and Space Port in Mojave, Calif., on Saturday for its first test flight. According to a news release, it reached a maximum speed of 304 kilometers per hour (189 miles per hour) over the course of the 2.5-hour-long flight, soaring as high as 17,000 feet before landing safely.

"The flight itself was smooth, which is exactly what you want a first flight to be," test pilot Evan Thomas told The Verge, later adding, "It flew very much like we had simulated and like we predicted."

Microsoft co-founder Paul Allen started Stratolaunch Systems in 2011 with the goal of building an airplane massive enough to carry rockets and other spacecraft to low-earth orbit.

This way of reaching space, known as air launch to orbit, has numerous benefits over traditional spacecraft launches. Because the plane takes off from a runway, it "can circumvent bad weather, air traffic, and other variables that cause delays with traditional ground launches," according to Stratolaunch's website.

And because the Stratolaunch is reusable — it lands after each launch — the company doesn't need to charge as much for its launch services, further democratizing access to space.

More on the Stratolaunch: Microsoft’s Co-Founder Just Revealed the Largest Plane in the World

The Age of Hypersonic Flight Will Completely Change How We Travel
6. 30. 17
Read More
Judge Dredd
Judge Uses ChatGPT to Issue Ruling in Court Case
3:34 PM
Read More
Save Yourselves
Furious Marsupial So Thirsty For Sex That It’s Dying, Scientists Warn
Yesterday
Read More
+Social+Newsletter
TopicsAbout UsContact Us
Copyright ©, Camden Media Inc All Rights Reserved. See our User Agreement, Privacy Policy and Data Use Policy. The material on this site may not be reproduced, distributed, transmitted, cached or otherwise used, except with prior written permission of Futurism. Articles may contain affiliate links which enable us to share in the revenue of any purchases made.
Fonts by Typekit and Monotype.