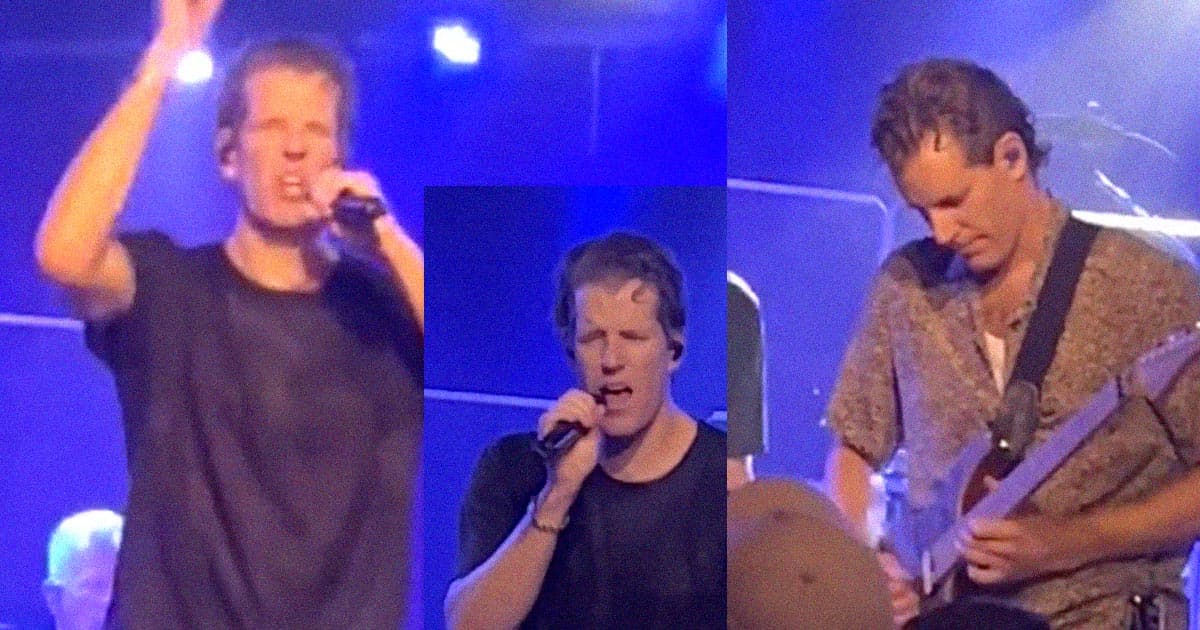 We take no pleasure in bringing you this news. In fact, we wish we didn't know ourselves. But the cursed rumors are true, and we're duty bound to inform you that the Winklevoss twins, Cameron and Tyler, are indeed in a band, as footage of the twins tunelessly and unironically covering "Don't Stop Believin'" has confirmed.

A quick glance at social media tells us that their band, called Mars Junction, isn't a secret side project. It seems that the Winklevii — former Olympic rowers, friends-turned-adversaries of Mark Zuckerberg (as portrayed by Armie Hammer in The Social Network), and billionaire founders of cryptocurrency and NFT startup Gemini — definitely want you to know about their "hard-hitting rock band," as Mars Junction is self-described in each of their Instagram bios, each of their Twitter bios, and across the band's multiple social media accounts, which include Instagram, Twitter, and Tiktok.

Tyler is lead vocals, Cameron jams out beside him on lead guitar. Are they good? Well, we're not music critics, so we'll let you decide for yourself.

uh so i saw the winklevoss twins' band? tonight? like, it's really them pic.twitter.com/xVqYwQrztL

The towering Mars Junction bandmates were fairly early to the crypto game, launching Gemini in 2014. Digital currency and NFT sales turned them into billionaires, though their personal wealth and their company's viability have both been damaged by the ongoing bitcoin crash. Gemini recently cut 10 percent of its employees — who, for some reason, they call "astronauts" — in response to the market drop-off.

"Today is a tough day, but one that will make Gemini better over the long run," the Winklevii wrote in a message to their astronauts when the layoffs were announced. "Constraint is the mother of innovation and difficult times are a forcing function for focus, which is critical to the success of any startup."

Neither brother has tweeted about the cryptocurrency fallout, but they sure are letting the people know about Mars Junction. You know what they say: lose billions, start a band. Tour dates are in their Linktree.

Regulating Crypto
Hillary Clinton Calls Out Crypto Exchanges for Letting Russia Bypass Sanctions
Mar 3
Read More
Bye Bye Baby
Lawyer for Crypto Laundering Rapper Says She Won't Flee Because of Her Frozen Embryos
Feb 11
Read More
Bitcoin & Clyde
Feds Arrest Crypto CEO for Bitcoin Laundering, But Her Real Crime Was Against Rap Music
Feb 8
Read More
+Social+Newsletter
TopicsAbout UsContact Us
Copyright ©, Camden Media Inc All Rights Reserved. See our User Agreement, Privacy Policy and Data Use Policy. The material on this site may not be reproduced, distributed, transmitted, cached or otherwise used, except with prior written permission of Futurism. Articles may contain affiliate links which enable us to share in the revenue of any purchases made.
Fonts by Typekit and Monotype.