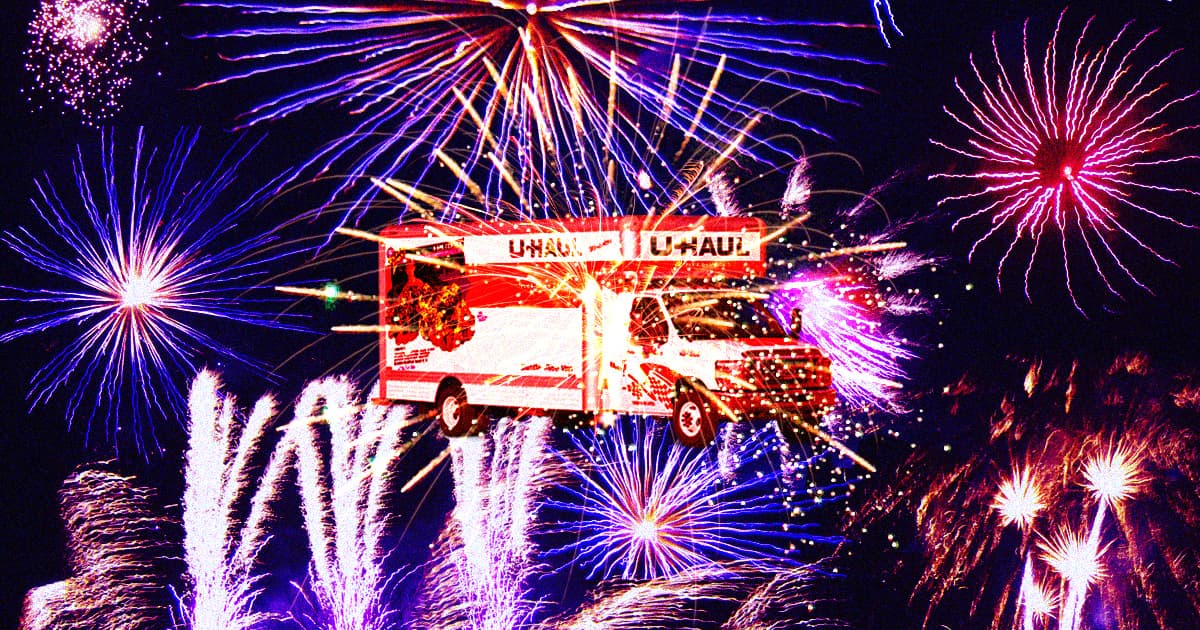 Maybe consider not doing this.

Maybe consider not doing this.

The sky glows pink as the people of a Toledo, Ohio neighborhood gather to watch an impressive but seemingly amateur fireworks show.

Suddenly, the camera shakes violently and what sounds like machine gun fire drowns out everything else. In the distance, a seemingly endless technicolor explosion erupts from a U-Haul truck as people flee, occasionally sending projectiles screaming past like a volcano made of neon. Finally, the explosion dies down and people return to the scene to investigate the damage and battle the now-growing flames. A single, unifying call echoes from behind the camera: "Wooooo!!!"

That was the scene at a Toledo block party where people played fast and loose with powerful explosives (warning: the video's commentary includes the occasional slur around the 2:30 point.)

The video continues with various people yelling about various fires while several people repeatedly flee and approach the flames — punctuated by the occasional erupting firework — in a futile attempt to bring them under control.

It's far from the only fireworks incident this summer. The scene was somehow less destructive than when Los Angeles police seized thousands of pounds of illegal fireworks and inexplicably decided to detonate them inside a special truck on-scene, essentially setting off a giant bomb that injured 17 people and destroyed nearby cars and homes.

We warned you that fireworks are bad. As the summer continues, please consider leaving the fireworks to the professionals. We already have enough fires raging as it is.

More on fireworks: We Are Literally Begging You Idiots To Skip the Fireworks This Year

Smashing Atoms
Startup Says It's Honing in on Simple Solution for Practical Fusion Power
Thursday
Read More
The Humanity!
Chimpanzee Star of "Buddy" Found Alive After His Owner Allegedly Faked His Death
Jun 6
Read More
Unreliable Friends
Archipelagic Nation Sick of Other Countries Breaking Climate Change Promises
May 29
Read More
+Social+Newsletter
TopicsAbout UsContact Us
Copyright ©, Camden Media Inc All Rights Reserved. See our User Agreement, Privacy Policy and Data Use Policy. The material on this site may not be reproduced, distributed, transmitted, cached or otherwise used, except with prior written permission of Futurism. Fonts by Typekit and Monotype.