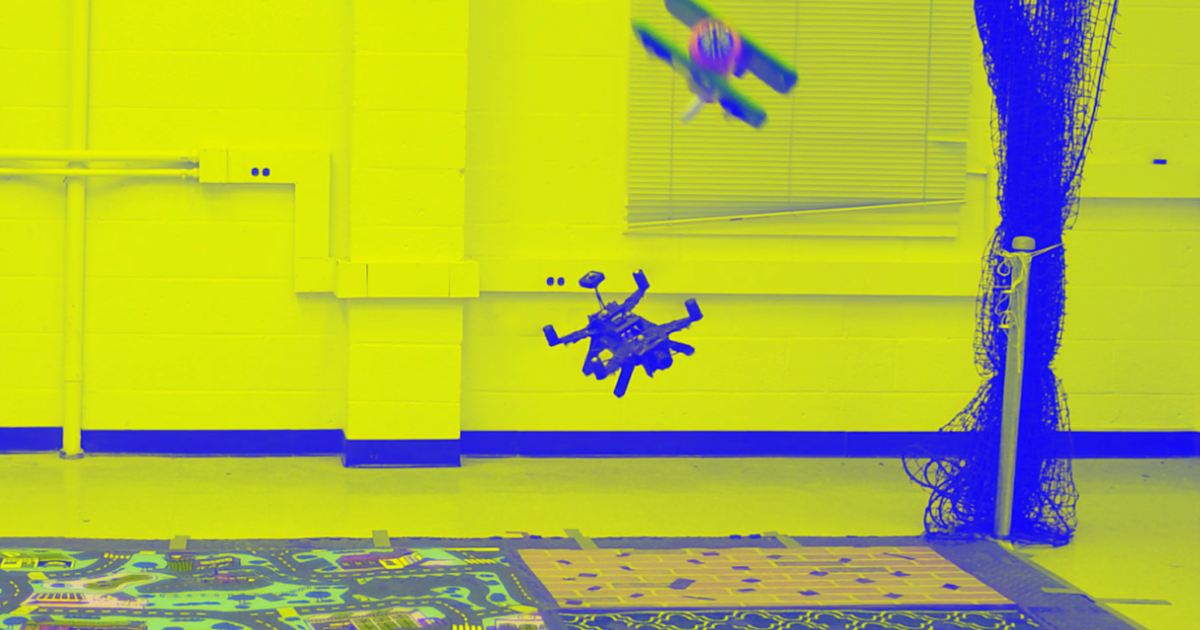 Watch This Drone Expertly Dodge Stuff Thrown at It

It avoids hurled balls, toys, and even another drone.

It avoids hurled balls, toys, and even another drone.

Drones are getting better at autonomously navigating the world, but one thing they still aren't so great at? Avoiding moving obstacles.

A team of researchers from the University of Maryland and University of Zurich have been working to make drones more nimble by equipping them with a combination of artificial intelligence and event cameras, an advanced type of sensor.

They describe their latest research in a recently published paper on the pre-print server arXiv — and because hearing about an obstacle-avoiding drone isn't as fun as actually seeing one in action, they also prepared a new demo video of the craft dodging hurled balls, toys, and even another drone.

Miss Me With That

The team claims its drone dodged between 70 and 86 percent of objects thrown at it from up to 17 feet away over the course of more than 200 trials — and it doesn't take much to imagine how this ability to dodge fast-moving objects could prove useful in real-world scenarios.

For one, we want drones to be able to share the skies with birds and other flying creatures without incurring unexpected damage or harming the animals. There's also the very real possibility that drones will need to avoid objects intended to do them harm — law enforcement drones might need to avoid projectiles hurled by angry citizens, for example.

More on drones: Cargo Drones Have One Problem: Not Crashing Into Things

Australia is Deploying AI Drones to Help Prevent Shark Attacks
8. 28. 17
Read More
Live Saving Medical Devices Could Soon Be Delivered By Drone to Heart Attack Victims
11. 19. 16
Read More
Chipotle Once Delivered Burritos to Hungry College Students...Via Drone
9. 13. 16
Read More
+Social+Newsletter
TopicsAbout UsContact Us
Copyright ©, Camden Media Inc All Rights Reserved. See our User Agreement, Privacy Policy and Data Use Policy. The material on this site may not be reproduced, distributed, transmitted, cached or otherwise used, except with prior written permission of Futurism. Articles may contain affiliate links which enable us to share in the revenue of any purchases made.
Fonts by Typekit and Monotype.