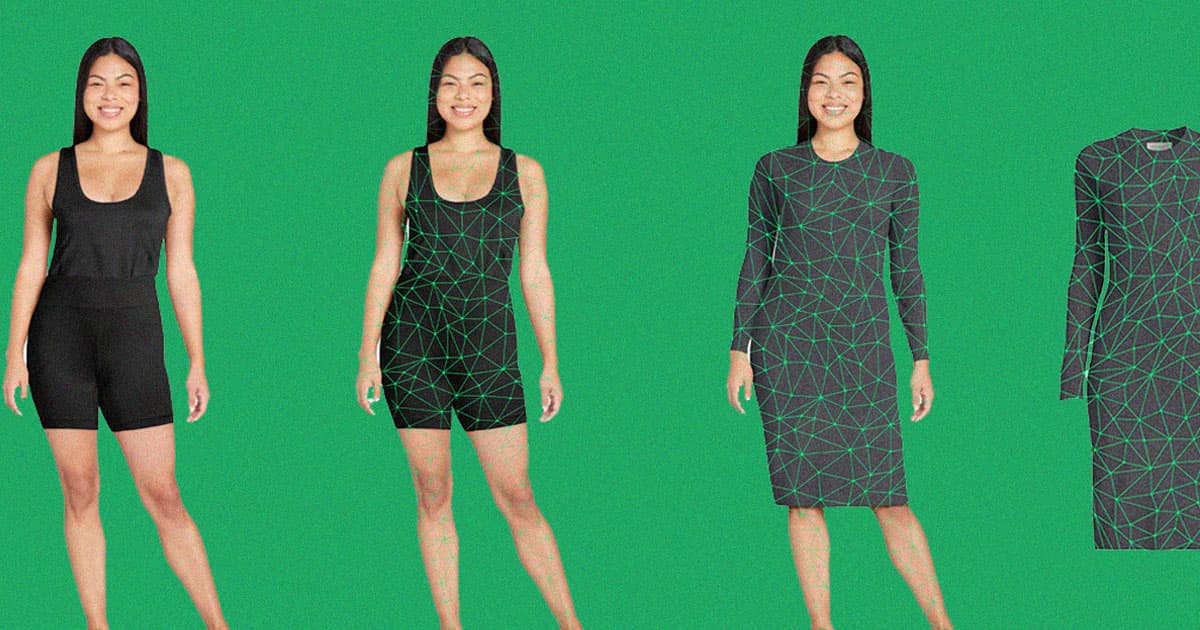 Walmart App Virtually Tries Clothes on Your Body... If You Strip

Shopping for clothes online is always a gamble. Sure, you might find better prices, but you won’t know if the fit is right until you try it on for real.

Enter Walmart's proposed solution: a just-launched feature in its iOS app, Walmart’s "Be Your Own Model" allows customers to virtually try on its selection of clothes. Rather than clunkily superimposing the clothes over a picture of yourself like a bad Photoshop job, the app uses "algorithms and intricate machine learning" — corporate marketing for, yes, AI — to realistically shape the clothes around a customer’s body.

Walmart says its app even accounts for how fabric might drape depending on its weight, and realistically simulates shadows. Just as impressive is the sheer quantity of items this feature is compatible with: over 270,000 clothing items, the company says.

The one catch? To use the "Be Your Own Model" feature, customers will have to be pretty scantily clad, down to tight underwear/shorts and a top. That’s more than a little invasive. Whether the feature will be as effective wearing other similarly tight but less revealing clothing remains to be seen.

The release comes off the back of Walmart’s acquisition of Zeekit in 2021, a virtual fitting startup.

And sorry, men, unless you like women’s fashion, this one’s a wash: it doesn’t look like Walmart’s newfangled feature support’s men’s fashion at all, according to The Verge.

But truthfully, should anyone use this? How much do we trust Walmart, a corporation that's allegedly violated privacy laws in the past, with pictures of our near-naked bodies? A data breach would be disastrous, potentially releasing revealing photos of countless customers. And God forbid if any of them are children.

So is the feature convenient? Sure. But feeling uncomfortable with its invasiveness is more than warranted. Surely at some point software will be able to pull off the same feat without making you strip, right?

Life Advice
Creator of "Second Life" Issues Warnings for Those Building Metaverses
11. 29. 21
Read More
Reality Bubble
Experts Say AR Could Let People "Reality Block" Stuff They Don't Like
11. 21. 21
Read More
Gotta Catch 'Em All
Pokémon Go Creator Fears "Dystopian Nightmare" Metaverse
11. 10. 21
Read More
+Social+Newsletter
TopicsAbout UsContact Us
Copyright ©, Camden Media Inc All Rights Reserved. See our User Agreement, Privacy Policy and Data Use Policy. The material on this site may not be reproduced, distributed, transmitted, cached or otherwise used, except with prior written permission of Futurism. Articles may contain affiliate links which enable us to share in the revenue of any purchases made.
Fonts by Typekit and Monotype.