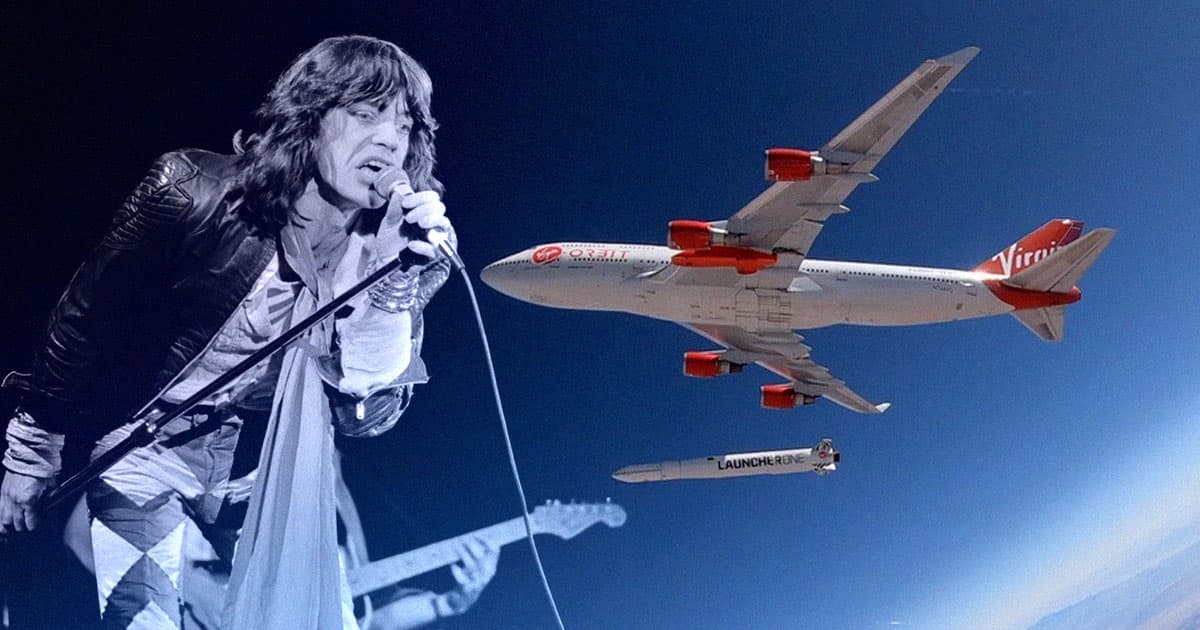 You can't always get what you want.

You can't always get what you want.

Virgin's space arm has sheepishly admitted that its latest mission disintegrated into pieces after lift-off — but investors shouldn't worry because before this one, which was named after The Rolling Stones' smash hit "Start Me Up," all the others did just fine.

"Prior to [the] Start Me Up mission, every customer satellite launched by Virgin Orbit had reached its desired orbit," a Virgin press release reads.

Per the company's statement, the Start Me Up mission is meant to be the first orbital launch ever conducted in the United Kingdom, and took place at a "bespoke drop zone" that Virgin built out of a "mere slab of empty cement at a commercial airport" in Cornwall, England.

Can't Get No Satisfaction

After successfully going through all its launch protocols and getting up 180 kilometers in the air during its January 9 debut, the rocket launched from the "Cosmic Girl" carrier aircraft — a repurposed Boeing 747 with its payload under the wing — "experienced an anomaly," the statement continues.

"This anomaly prematurely ended the first burn of the upper stage," the press release explains. "This event ended the mission, with the rocket components and payload falling back to Earth within the approved safety corridor without ever achieving orbit."

Translation: the rocket and all nine of its satellites, including some that belonged to the British military, were in pieces by the time they got back to the ground.

Sympathy for the Devil

Virgin adds in its statement that the company is now conducting an "extensive" formal investigation into what went wrong, and its next scheduled launch out of California's Mojave Desert is set to go off as planned, with hopes that the company will be able to achieve a successful launch out of its "Spaceport Cornwall" in the UK later this year.

Given that The Stones signed to Virgin founder Richard Branson's record label in the early 90s, he undoubtedly knows, per the lyrics to another of the British rock gods' biggest hits, that "you can't always get what you want."

Indeed, the Virgin statement could easily have quoted another bit of that song to its investors: "If you try sometimes, well, you just might find, you get what you need."

More on Branson: Richard Branson Says Elon Musk Showed Up at His House at 2am

Space Billboards
Russian Scientists Propose Plan to Launch Huge Advertisements Into Orbit Over Cities
10. 5. 22
Read More
Sabers Rattled
Russia Issues Veiled Threat to Shoot Down Pesky SpaceX Satellites
9. 16. 22
Read More
Big Time
Meet the 24-Year-Old Who Drives NASA Rockets to the Launch Pad in a 6.5 Million Pound Crawler
2. 9. 22
Read More
+Social+Newsletter
TopicsAbout UsContact Us
Copyright ©, Camden Media Inc All Rights Reserved. See our User Agreement, Privacy Policy and Data Use Policy. The material on this site may not be reproduced, distributed, transmitted, cached or otherwise used, except with prior written permission of Futurism. Articles may contain affiliate links which enable us to share in the revenue of any purchases made.
Fonts by Typekit and Monotype.