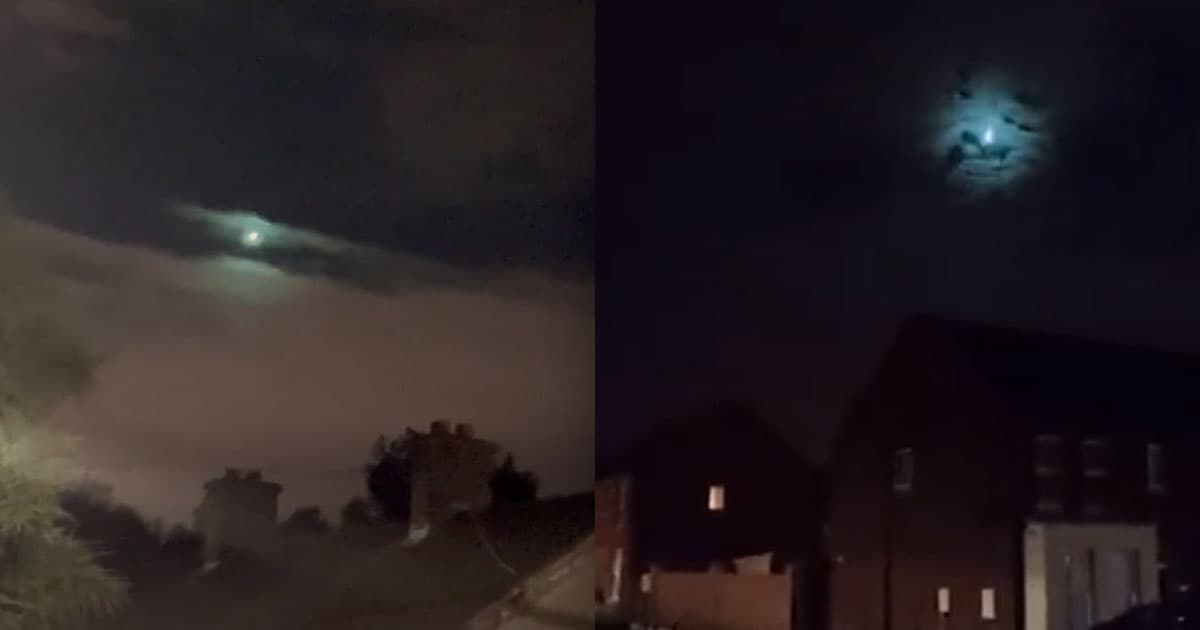 "I’ve seen similar fireballs in the past 10 years, but nothing as spectacular as this."

"I’ve seen similar fireballs in the past 10 years, but nothing as spectacular as this."

On Wednesday night, thousands of onlookers in Ireland and the UK watched in awe as the green fireball of a low flying meteor streaked across the night sky of residential areas.

First spotted after nightfall, the fireball spurned over 1,000 reports to the International Meteor Organization. In other words, there were a lot of eyeballs on this burning space debris.

And luckily for all of us at home, those onlookers captured the fireball on video from plenty of different angles. Have a look at some of the best ones below.

Can’t believe I seen this and managed to catch it on camera!! Going over Paisley at 10pm☄️ #glasgow #paisley #meteor #comet #fireball @UKMeteorNetwork @Daily_Record pic.twitter.com/mH9o2062nI

@barrabest Hi Barra, spotted this just now. At first I thought it was a firework, no noise and it didn't explode 😄 quickly got my phone out, are we due any meteor showers or anything? pic.twitter.com/sQbcVRpDLt

One of a Kind

It’s an especially fascinating instance of a quotidian phenomenon. It’s not everyday you get to see a meteor as bright, vividly colored, or low to the ground as this one — low enough that some witnesses claimed they could hear it as it flew by, according to New York Post.

Indeed, the flickering, eerie green specter of the meteor gave off an otherworldly aura as it flashed across the night sky before disappearing behind a plume of clouds.

"Spotted in West Cumbria looking West over the Solway at approx 22:00, very long tail and slow trailing through the sky," one observer told the Daily Mail. "I’ve seen similar fireballs in the past 10 years, but nothing as spectacular as this."

Naturally, speculation abounded as to the nature of the meteor, covering everything from it being the usual space rock, a Starlink re-entry, or — apologies in advance — aliens.

According to the UK Meteor Network, the fireball was likely just a piece of space junk, a conclusion that scientists at the UK Fireball Alliance concur with.

"There is a reasonably high chance that this is space junk, unfortunately," planetary scientist and Fireball Alliance member John Daly told New Scientist, cautioning that they're still finishing the calculations. "[The fireball] had a very shallow entry angle, a substantial amount of fragmentation, which is typical of space junk, and it looks slowish. Space rocks tend to be a bit faster."

However, the UK Meteor Network later tweeted that it could not find "any known space junk or satellite de-orbit that could account for this fireball."

Junk or not, it made for a beautiful and fascinating spectacle, and that's worth something.

Aquatic Aliens
Experts Puzzled by Harvard Scientist Looking for Alien Wreckage in Ocean
9. 2. 22
Read More
Is Blowing up an Asteroid With a Bomb Really a Good Idea?
2. 29. 16
Read More
His Power
Scientists Develop Compound That Kills So Efficiently They Named It After Keanu Reeves
Yesterday
Read More
+Social+Newsletter
TopicsAbout UsContact Us
Copyright ©, Camden Media Inc All Rights Reserved. See our User Agreement, Privacy Policy and Data Use Policy. The material on this site may not be reproduced, distributed, transmitted, cached or otherwise used, except with prior written permission of Futurism. Articles may contain affiliate links which enable us to share in the revenue of any purchases made.
Fonts by Typekit and Monotype.