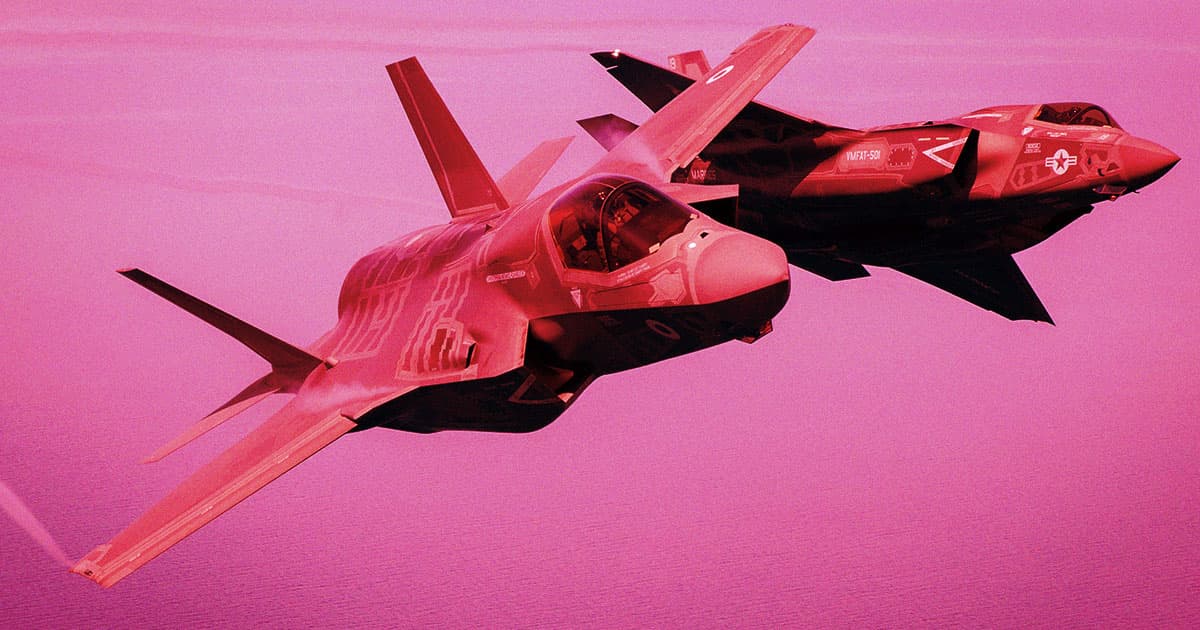 Big "oops" for the Pentagon.

Big "oops" for the Pentagon.

The Pentagon has halted deliveries of the F-35 — the nation's most expensive jet, used by the Air Force, Navy and Marine Corps — after discovering that a component of its engine is actually made in China.

That component, according to Politico, is a metal alloy that makes up part of an important magnet, embedded into the F-35 turbomachine's pumps. As far as Things That You Hope Work go, a fighter jet's engine is pretty high on the list.

"On Aug. 19, the Defense Contract Management Agency (DCMA) notified the F-35 Joint Program Office that an alloy in magnets used in F-35 turbomachine pumps is potentially in non-compliance with Defense Federal Acquisition Regulations Supplement (DFARS)," Russell Goemaere, a spokesman for the F-35 Joint Program Office (JPO) told Futurism sister site The War Zone in a statement, "as the alloy was produced in the People's Republic of China."

Good news: the military doesn't think that the part is doing any damage to the craft — or, for that matter, to US intelligence operations.

"We have confirmed that the magnet does not transmit information or harm the integrity of the aircraft," Goemaere told Politico, "and there are no performance, quality, safety or security risks associated with this issue and flight operations for the F-35 in-service fleet will continue as normal."

Bad news: it inspires no confidence that this happened in the first place, especially in the disastrous F-35 program. Beyond the fact that China and the US aren't exactly friendlies right now, the alloy's use in the F-35 production line could mean that Lockheed Martin, the contractor that builds the craft, violated the Buy American Act. Lockheed Martin would pretty much just get a slap on the wrist for that, but this is a pretty serious oversight, no matter how you cut it.

"We are working with our partners and DoD to ensure contractual compliance within the supply chain," a Lockheed Martin spokesperson said in a statement to Politico. "The magnet has no visibility or access to any sensitive program information."

The statement continued: "The F-35 remains safe for flight, and we are working with the DoD to resolve the issue as quickly as possible to resume deliveries."

Tough go for everyone involved, it seems. We might suggest that in the meantime, the Pentagon and Lockheed Martin both invest in some of those gold stickers? Might help.

Electric Cars May Be Cheaper Than Gas Guzzlers in 7 Years — If People Actually Buy Them
3. 23. 18
Read More
China Has Launched the World's First All-Electric Cargo Ship
12. 5. 17
Read More
Volkswagen Has Pledged to Spend $40 Billion on Electric and Hybrid Cars
11. 17. 17
Read More
+Social+Newsletter
TopicsAbout UsContact Us
Copyright ©, Camden Media Inc All Rights Reserved. See our User Agreement, Privacy Policy and Data Use Policy. The material on this site may not be reproduced, distributed, transmitted, cached or otherwise used, except with prior written permission of Futurism. Articles may contain affiliate links which enable us to share in the revenue of any purchases made.
Fonts by Typekit and Monotype.