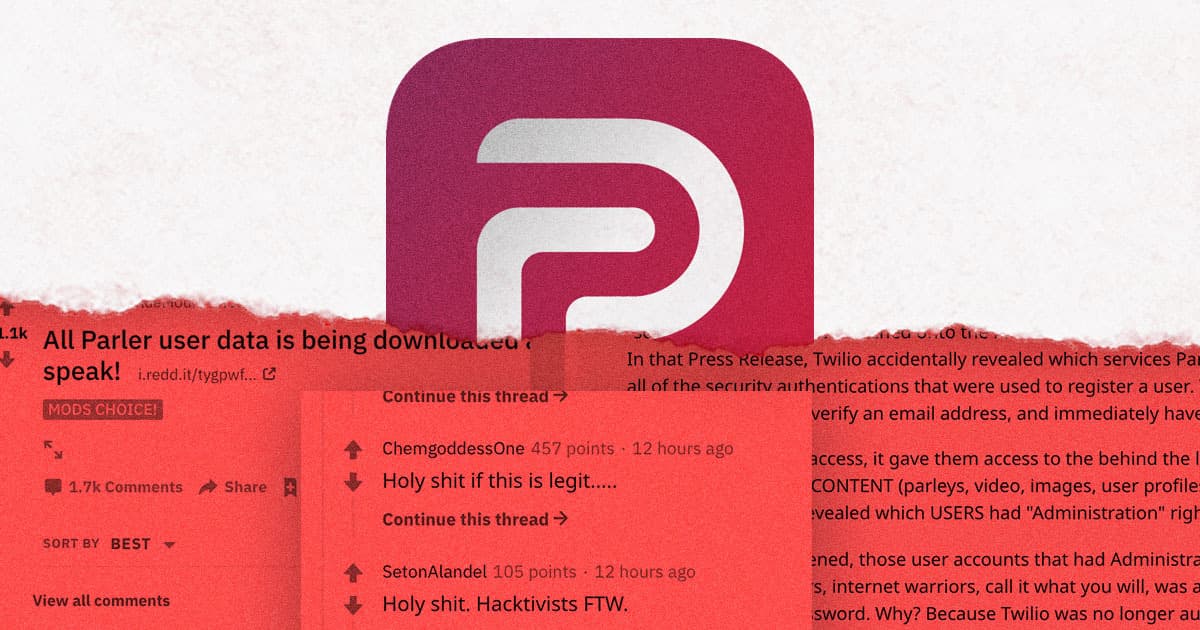 And a hacker says they've downloaded all the posts from the Capitol building attack.

And a hacker says they've downloaded all the posts from the Capitol building attack.

It's the latest in a multiple-day deplatforming campaign that saw President Donald Trump as well as accounts boosting QAnon conspiracy theories banned from online platforms. But before the site shut down, Vice News reports that a hacker who goes by the moniker "Crash Override" seems to have scraped user data, posts, and media from last week's insurrection at the U.S. Capitol — potentially archiving information that could expose many of the rioters.

Parler was a digital haven for the far-right, especially compared to more mainstream — and more heavily-moderated — platforms like Twitter. But Google, Apple, and Amazon Web Services all dropped their support for the Parler app, driving it offline on Sunday night.

But the user data lives on. It turns out that Parler had shockingly weak data protection in place, and Crash Override claims they were able to quickly scrape the platform, including deleted posts.

I wasn't going to put this out so soon, but since AWS might now pull their hosting, the more people get started with this, the better.

For right-wingers who'd hoped to remain anonymous and avoid accountability for raiding the U.S. Capitol, the scraping is bad news. Within the data, which Vice News reports is still being processed, could be enough to identify and locate individual Parler users who either raided the Capitol or posted threatening messages against public officials.

"The intent is a mass dox and a list to hold patriots 'accountable,'" a Telegram account called "North Central Florida Patriots" said, according to Vice News. "It is too late to scrub your data, and it's already archived. There is nothing you can do to prevent what's already happened. All you can do is prepare for the fallout."

What's a Space Force?
Progressive Groups Call For Elimination of Space Force
11. 18. 20
Read More
Cozy Bears
State-Backed Russian Hackers Are Targeting Coronavirus Vaccine Research
7. 17. 20
Read More
Like a 6G
Trump Calls For "6G," Which Doesn't Exist
2. 21. 19
Read More
+Social+Newsletter
TopicsAbout UsContact Us
Copyright ©, Camden Media Inc All Rights Reserved. See our User Agreement, Privacy Policy and Data Use Policy. The material on this site may not be reproduced, distributed, transmitted, cached or otherwise used, except with prior written permission of Futurism. Articles may contain affiliate links which enable us to share in the revenue of any purchases made.
Fonts by Typekit and Monotype.