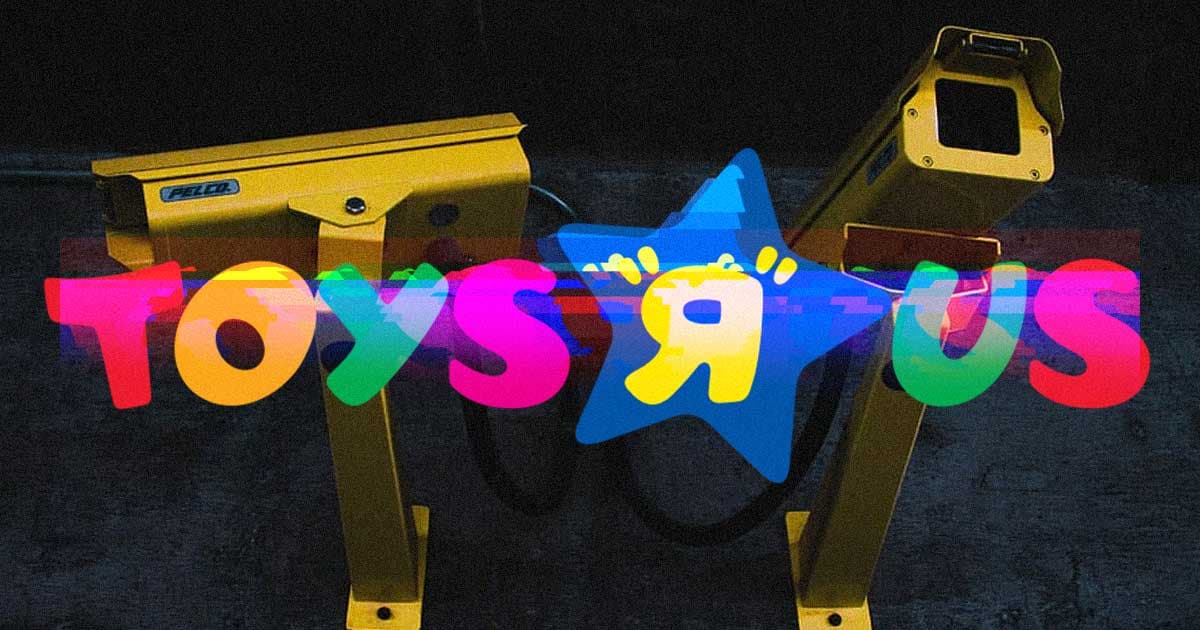 But only if they're less than four feet tall.

But only if they're less than four feet tall.

Eyes in the Sky

After closing nearly all of its stores in 2018, iconic toy retailer Toys "R" Us has risen from the ashes of bankruptcy to open two new stores in recent weeks, with a killer feature: the undead Toys "R" Us stores are equipped with sensors that track every move shoppers make.

Every Move You Make

In November, CNBC reported that software retailer B8ta had installed dozens of sensors powered by surveillance company RetailNext's tech in the ceilings of both new Toys "R" Us stores.

The sensors would "monitor traffic patterns and shopper cadence, among other metrics," according to CNBC, in order to provide Toys "R" Us and its partner brands with data on how the stores were performing.

Privacy advocates soon began questioning this use of spyware in a store frequented by children, and in response, a spokesperson for Toys "R" Us parent company Tru Kids told Wired that "the cameras do not register kids."

As for how that might be possible, RetailNext spokesperson Ray Hartjen elaborated that the devices are "[generally trained to ignore] objects, including people, less than four feet tall."

That answer is less-than-reassuring, though, given that, as Wired noted, a 10-year-old of normal height can be nearly five feet tall — so if you're a parent worried about your kid becoming some brand's data point, maybe just stick to buying toys online this holiday season.

READ MORE: Toys "R" Us Is Back — Now With More Surveillance! [Wired]

Stalker Aid
Experts Horrified by Facial Recognition Site That Digs Up "Potentially Explicit" Photos of Children
Jul 19
Read More
Final Predestination
Microsoft Created Creepy Algorithm to Predict Which Specific Teens Would Get Pregnant
Feb 19
Read More
Gamer Gab
Microsoft: We Stopped Listening to Your Xbox Convos "Months Ago"
8. 22. 19
Read More
+Social+Newsletter
TopicsAbout UsContact Us
Copyright ©, Camden Media Inc All Rights Reserved. See our User Agreement, Privacy Policy and Data Use Policy. The material on this site may not be reproduced, distributed, transmitted, cached or otherwise used, except with prior written permission of Futurism. Articles may contain affiliate links which enable us to share in the revenue of any purchases made.
Fonts by Typekit and Monotype.