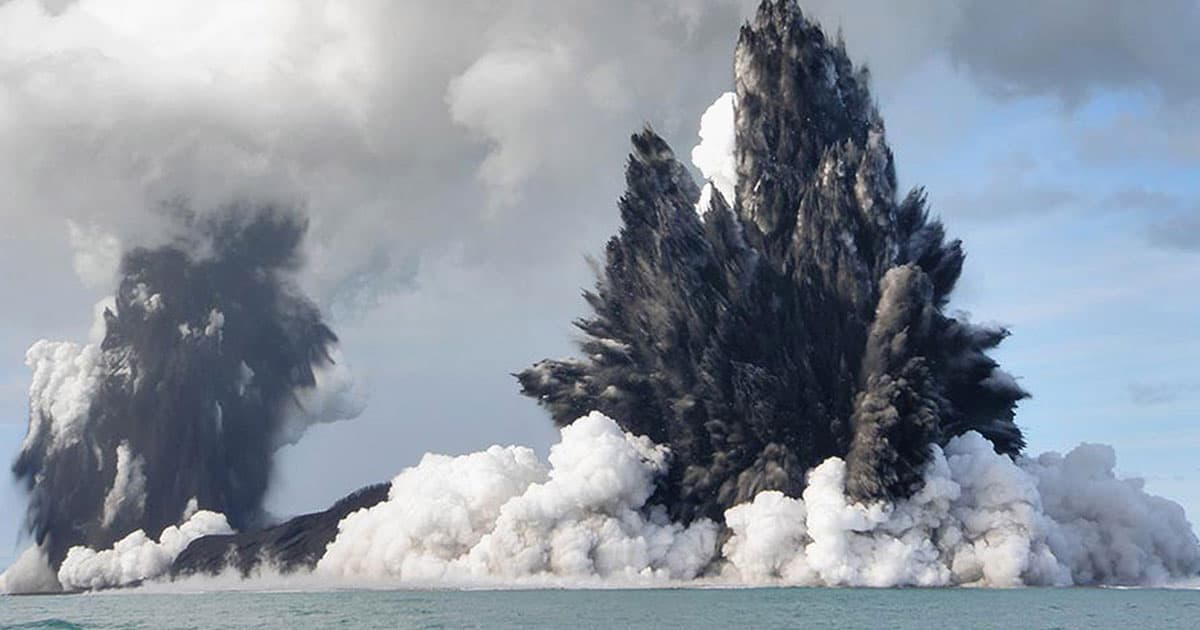 Tonga Eruption Was 500 Times Stronger Than an Atomic Bomb

"We come up with a number that's around ten megatons of TNT equivalent."

"We come up with a number that's around ten megatons of TNT equivalent."

The small island nation of Tonga lost one of its smaller islands after a gargantuan volcanic eruption tore the landmass to shreds over the weekend.

The event was so violent, in fact, that the force of the explosion was more than 500 times as powerful as the atomic bomb the US dropped on Hiroshima at the end of World War II, NPR reports — a devastating and historic geological event.

And that means it was incredibly loud as well.

"This might be the loudest eruption since [the eruption of the Indonesian volcano] Krakatau in 1883," US Geological Survey geophysicist Michael Poland told the broadcaster.

Unsurprisingly, the blast has left Tonga in tatters. The nation is still cut off from the world thanks to undersea cables seemingly being severed by the event. The airport is still covered in ash, stopping any planes from touching down with aid.

One island was particularly badly hit, with all homes reportedly being destroyed.

The island that disappeared almost entirely with the event was actually formed out of a platform that rose out of the sea due to yet more volcanic activity around six years ago, connecting two older islands on either side, according to NPR.

While the eruption itself was extremely forceful, it lasted for less than an hour, unlike many longer-lasting large eruptions.

"It had an outsized impact, well beyond the area that you would have expected if this had been completely above water," Poland told NPR.

"That's the thing that's just a head-scratcher," he added.

Explosive Context
Scientists: Ocean Warming at the Rate of Five A-Bombs per Second
1. 14. 20
Read More
Nasa Has a $3.5bn Plan to Save the Planet From the Yellowstone Supervolcano
8. 25. 17
Read More
Shark Smile
Influencer Fined for Eating Endangered Great White Shark
9:15 PM
Read More
+Social+Newsletter
TopicsAbout UsContact Us
Copyright ©, Camden Media Inc All Rights Reserved. See our User Agreement, Privacy Policy and Data Use Policy. The material on this site may not be reproduced, distributed, transmitted, cached or otherwise used, except with prior written permission of Futurism. Articles may contain affiliate links which enable us to share in the revenue of any purchases made.
Fonts by Typekit and Monotype.