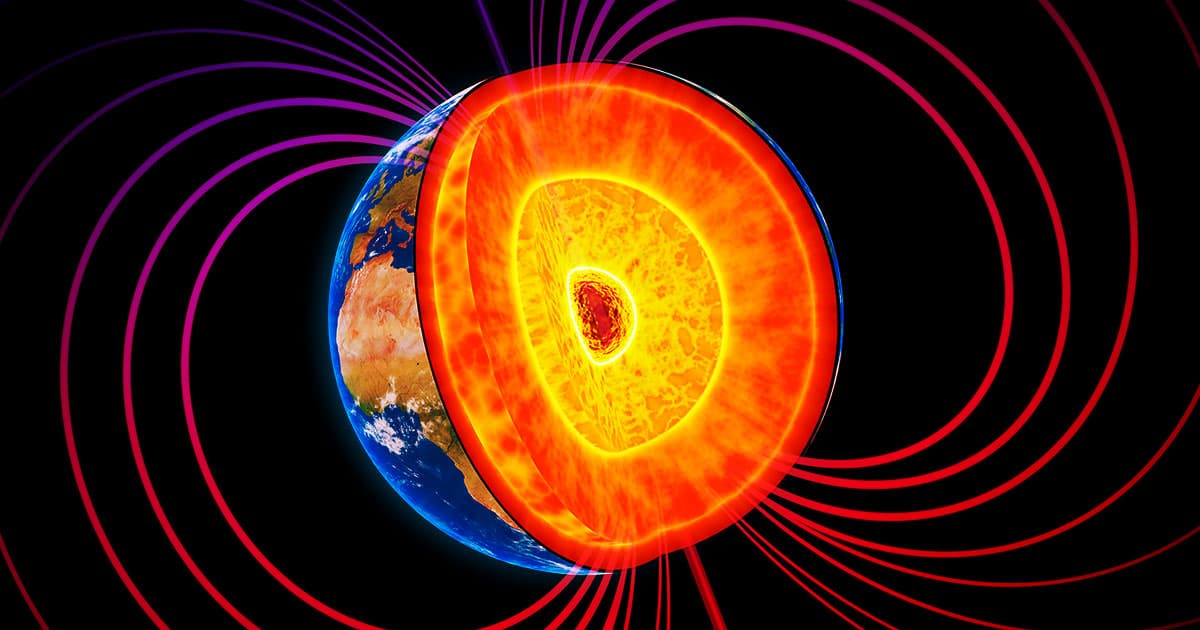 "Tiny wiggles" in the planet's magnetic field are appearing like clockwork.

"Tiny wiggles" in the planet's magnetic field are appearing like clockwork.

The Earth’s magnetic field is the result of charged particles getting trapped in a turbulent dance of convection currents deep below the surface.

But according to a new study published in the journal Proceedings of the National Academy of Sciences, there may be method to the madness.

A team led by Nicolas Gillet from the Grenoble Alpes University in France discovered that the planet’s magnetic field fluctuated like clockwork every seven years, drifting westward at 900 mph around the equator — demonstrating that there’s still a lot to learn about the inner workings of our planet.

“What is important to know is that the magnetic field in the core evolves on very long timescales,” Gillet told New Scientist. “And what we witnessed is only tiny wiggles on top of this.”

So far, scientists have predicted that a thin layer of stratified rock could be causing shifts in the magnetic field between the Earth’s outer core and mantle. But Gillet’s research suggests these changes could be taking place without the rock layer.

His team analyzed geomagnetic field data between 1999 and 2021 taken by satellites and ground-based observatories. And the findings, they say, could have great implications on how we understand the formation of our planet.

“We try to understand the physics that is responsible for the observed evolution of the magnetic field of our planet,” Gillet told Newsweek. “It evolves over all time-scales, and the longer periods show the strongest changes.”

“These interannual changes remained unexplained since their discovery in the late 1970s in ground-based records,” he added. “Understanding them opens a door on the field deep in the core, which we cannot directly probe based on observations alone.”

More on the Earth’s core: Scientists Puzzled by Two Huge Masses Inside the Earth

The Kids Won't Be Alright
Elon Musk Warns That Humankind Will “End Up in Adult Diapers”
Yesterday
Read More
Dam Straight
China Says It’s 3D Printing a 590-Foot Hydroelectric Dam With Zero Human Labor
May 11
Read More
Circle of Life
Hooray! The Great Pacific Garbage Patch Has Become a Thriving Ecosystem, Scientists Say
May 1
Read More
+Social+Newsletter
TopicsAbout UsContact Us
Copyright ©, Camden Media Inc All Rights Reserved. See our User Agreement, Privacy Policy and Data Use Policy. The material on this site may not be reproduced, distributed, transmitted, cached or otherwise used, except with prior written permission of Futurism. Fonts by Typekit and Monotype.