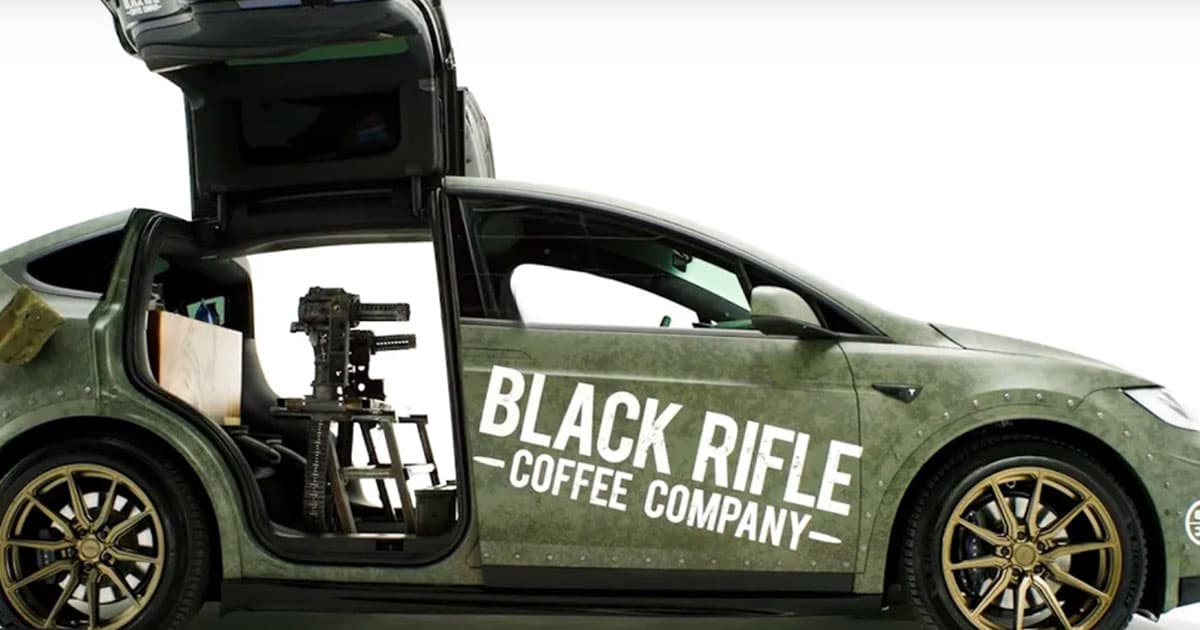 Just what we needed.

Just what we needed.

It's exactly what coffee culture needed — a YouTube studio for gun nuts partnering with coffee roaster Black Rifle Coffee to mount dual machine guns to the inside of a Tesla Model X.

Hey, at least, it makes for a clickworthy thumbnail.

The Model X got the militaristic makeover courtesy of FullMag Studios, a Tennessee-based video producer. The car features a full-service espresso bar, a frunk full of canned coffee — and two machine guns as well as bulletproof glass, for some reason.

They replaced the back seats with a custom metal rig allowing two rotary-barreled machine guns to pop out on each side, thanks to the Model X's wing doors — and presumably threaten anybody who says you over-extracted their macchiato.

It's the electric car of your dreams, that is, if you're a gun-toting, espresso-sipping — yet somewhat environmentally conscious — coffee enthusiast with a serious caffeine addiction.

But whether caffeine and two custom 5.56mm miniguns are a good pairing remains dubious.

It's a bizarre mashup of two cultures. In fact, the pro-Trump coffee company that serves "pro-American" communities faced some pretty severe backlash in the past — well before the dawn of the Model X — for being closely associated with extremist culture.

Black Rifle Coffee Company owner and CEO Evan Hafer was hoping a New York Times article published in July would allow them to distance themselves from right-wing nut job culture — but the approach completely backfired.

And a Model X featuring two miniguns, for whatever reason, isn't exactly going to help that.