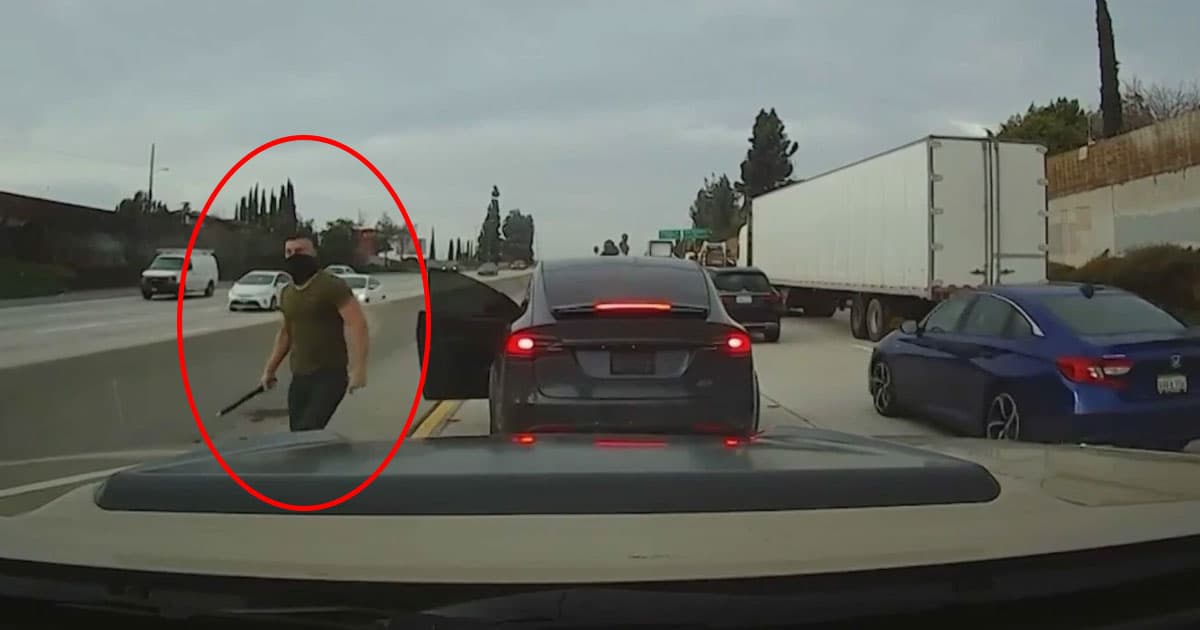 A masked Tesla driver armed — for some reason — with a pipe was caught on video attacking someone else's car on a freeway in Los Angeles. Worse yet, he's apparently been spotted menacing others around town.

In video published by LA's ABC7 news broadcaster, a muscular man with a black bandana on his face is seen jumping out of his Tesla, which was pulled over on a stretch of the 2 freeway in the tony Glendale neighborhood, and approaching the filmer's car.

Though off-camera, the sounds of at least three strikes to the victim's vehicle can be heard, along with, somewhat humorously, the video-filmer's frustrated sigh.

A driver attacks multiple motorists in a road rage rampage caught on camera. The driver of a Tesla with no plates attempts to run cars off the road before attacking another driver's car with a pipe. The search for the masked madman. Tonight at 11 from ABC7 https://t.co/qJMuuyJm8P pic.twitter.com/t0IW9iZSnA

The victim, who was not named, said that he began filming the furious Tesla driver while he was driving erratically — and thinks that once the fellow driver noticed he was being recorded, he went off.

"He notices that I’m taping him, so he follows me," the anonymous man told ABC7. "At some point, he cuts me off, slams the brakes and starts beating on my car."

He then described his thought process as the masked man approached him with a weapon.

As ABC7 notes in another article, videos have circulated on social media showing what appears to be the same Tesla driver pulling the same pipe-wielding performance in various parts of the LA area over a series of months.

"Maybe it’s a pattern, maybe he was just having a bad day, I don’t know," the victim mused to the local news broadcaster. "Who can say what was going on in his head?"

While there have been reports of Tesla owners themselves being the targets of road rage from apparent Elon Musk haters, this instance — and the potential for the man in the video doing it more than once — seems to turn that dynamic on its head.

Hopefully it's isolated to just this one jerk — who has yet to be identified — and isn't indicative of a growing trend.