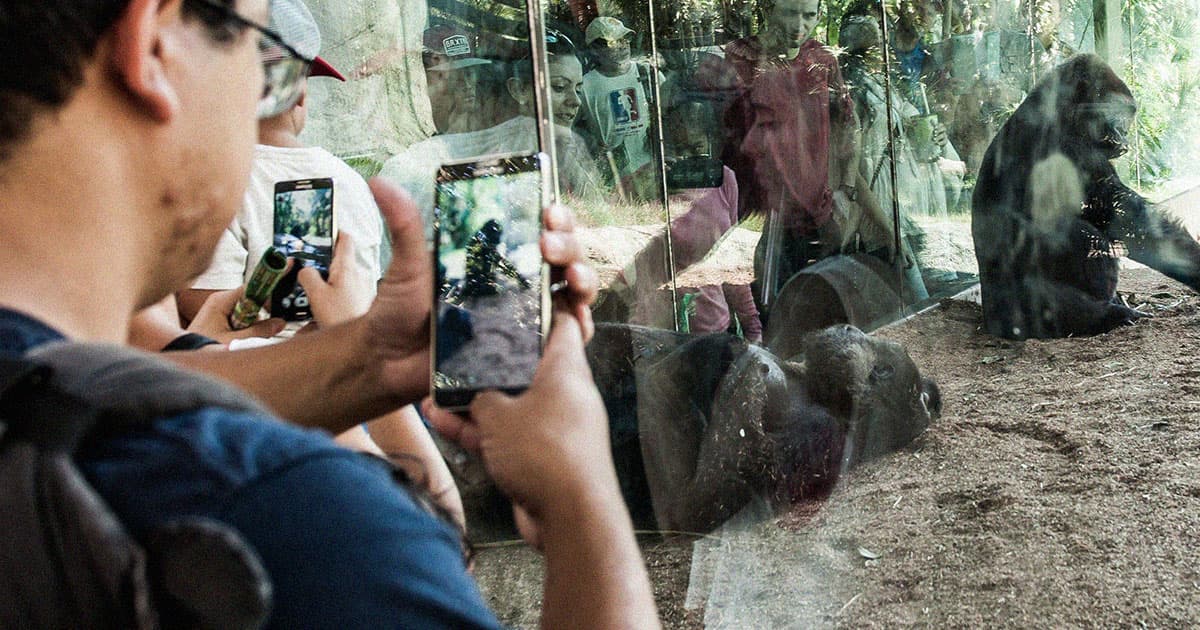 The 16-year-old, who lives with three other male gorillas "bachelor" style, has had countless visitors come up to the glass enclosure to show him pictures and videos on their smartphones — and he's reportedly hooked, to the point that the zoo put up a rope to keep visitors away from the glass.

"It seemed to almost surprise Amare because his attention was very much distracted," Stephen Ross, director of the zoo’s Lester E. Fisher Center for the Study and Conservation of Apes, told the Sun Times.

It's very much like Ross's own battles with his teenagers.

"As parents, we think about we want to give our children choices, we want them to grow into adults, but every once in a while we have to sort of guide those choices for their good," he told the publication. "And rather than maybe allowing them to sit inside and watch TV all day, maybe encourage them to go outside and interact with their friends."

"That’s something that I think all responsible parents think of and, in many ways, it’s similar to what we’re doing here," he added.

Ross also mentioned that Amare's screen time may be the reason why he has been paying  less attention to his other three roommates.

"More and more of his time he’s spending over there sort of looking to engage with these screens, and we have started to see behavioral changes," the researcher said.

Hopefully, the rope separating visitors will allow Amare to quit his new habit, a depressing consequence of holding wild animals in captivity.

"If we can all sort of agree that we want to do what’s best for the animals, then we can sort of resist that desire to sit there and flip through pictures for an hour with him," Ross told the Sun Times.

Abso-Effing-Lutely
Free Speech Absolutist Elon Musk Discovers That Some Speech Is Unacceptable After All
Dec 2
Read More
Might See Nonsense
MSN Fired Its Human Journalists and Replaced Them With AI That Started Publishing Fake News About Mermaids and Bigfoot
Dec 2
Read More
Break Out in Hives
Twitter Competitor Shuts Down App When It Turns Out Hackers Can Read Users' Private Messages
Dec 1
Read More
+Social+Newsletter
TopicsAbout UsContact Us
Copyright ©, Camden Media Inc All Rights Reserved. See our User Agreement, Privacy Policy and Data Use Policy. The material on this site may not be reproduced, distributed, transmitted, cached or otherwise used, except with prior written permission of Futurism. Articles may contain affiliate links which enable us to share in the revenue of any purchases made.
Fonts by Typekit and Monotype.