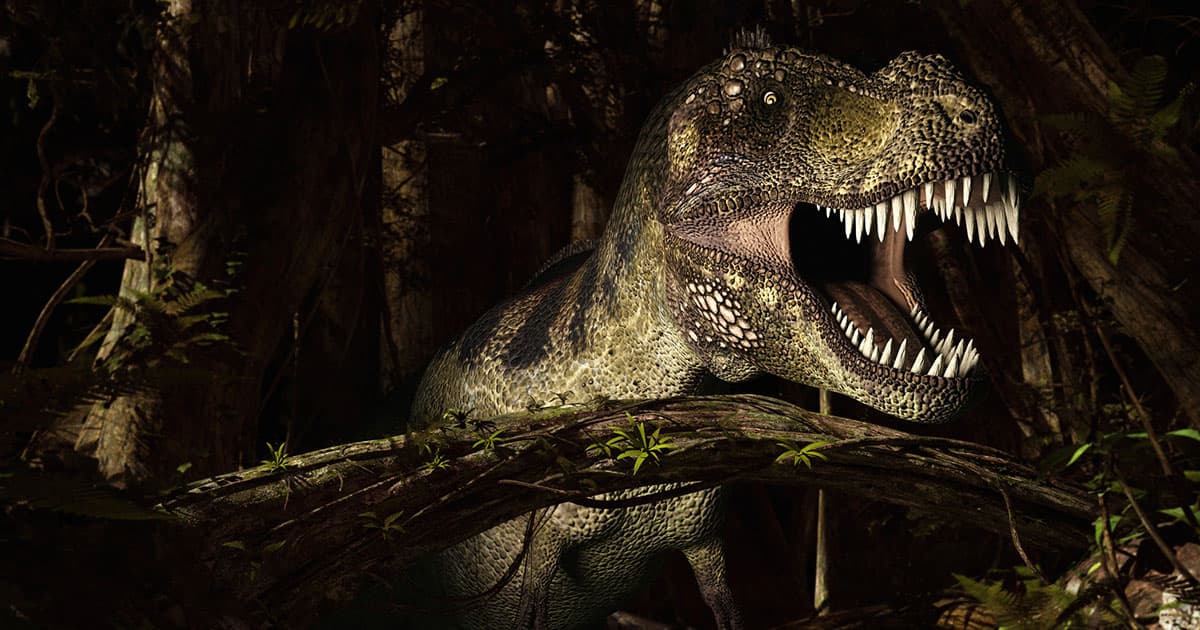 In Terrifying News, Big Brained T-Rex May Have Been as Smart as Primates

The tyrannosaurus rex was the apex of all apex predators in its heyday over 65 million years ago, known more in pop culture for its ferocity than its smarts. But according to a new study, we may have been underestimating how intelligent these towering tyrants were this whole time.

In fact, compared to the intelligence of their peers, the T-Rex and other theropods — three clawed, bipedal dinosaurs — may have been the "primates of their time," said neuroscientist Suzana Herculano-Houzel, author of the study published in the Journal of Comparative Neurology, in a video about her research.

According to her findings, theropods had as many neurons in their brains as monkeys do today, with the T-Rex boasting "baboon-like" numbers of up to 3 billion neurons. That's a pretty scary level of intelligence for a killing machine the size of a house.

With that many neurons, a T-Rex wouldn't have just possessed uncanny cognition. It also might have lived longer, up to 40 years, Herculano-Houzel estimates. That's enough time and smarts to potentially be a social creature with its own culture, like primates and whales, and also suggests they may have worked together, too.

The ability to use tools is even on the table — though with their infamously stubby arms, that seems less likely.

It's officially news: T. rex had baboon-like numbers of brain neurons, which means it had what it takes to build tools, solve problems, and live up to 40 years, enough to build a culture! Paper is just out in J Comp Neurol. Reality was actually MORE terrifying than the movies! pic.twitter.com/6HafJVHQlk

Without any theropod brains lying around — soft tissues like gray matter are rarely fossilized — determining an accurate neuron count of an extinct animal relies on the brains of its modern descendants: birds.

That math is relatively simple. Instead, the difficulty lied in establishing that the brain size proportionality in birds also applied to dinosaurs — "which is what I just did," she declared.

But as an essential tenet to her work, Herculano-Houzel maintains that theropods must be treated as a discrete group with its own distinct traits, rather than thinking of dinosaurs as a homogeneous whole.

From that assumption, Herculano-Houzel realized that theropods in particular had a similar correlation between body mass and brain size to pre-impact birds, or basal birds. From there, she used the neuron count of modern birds like emus and ostritches and applied the same rules of scaling to figure out how many neurons theropods like the T-Rex may have had.

It's a huge revelation if it holds up, and it makes you marvel at how drastically our understanding of ancient life continues to shift.

Brands We Love
Want to Own a Fossilized Tyrannosaurus Rex Bone? Of Course You Do.
6. 22. 20
Read More
Save Yourselves
Furious Marsupial So Thirsty For Sex That It’s Dying, Scientists Warn
Yesterday
Read More
We're in Hell
Scammers Are Already Convincing Idiots They Can Get Rich Using ChatGPT
Yesterday
Read More
+Social+Newsletter
TopicsAbout UsContact Us
Copyright ©, Camden Media Inc All Rights Reserved. See our User Agreement, Privacy Policy and Data Use Policy. The material on this site may not be reproduced, distributed, transmitted, cached or otherwise used, except with prior written permission of Futurism. Articles may contain affiliate links which enable us to share in the revenue of any purchases made.
Fonts by Typekit and Monotype.