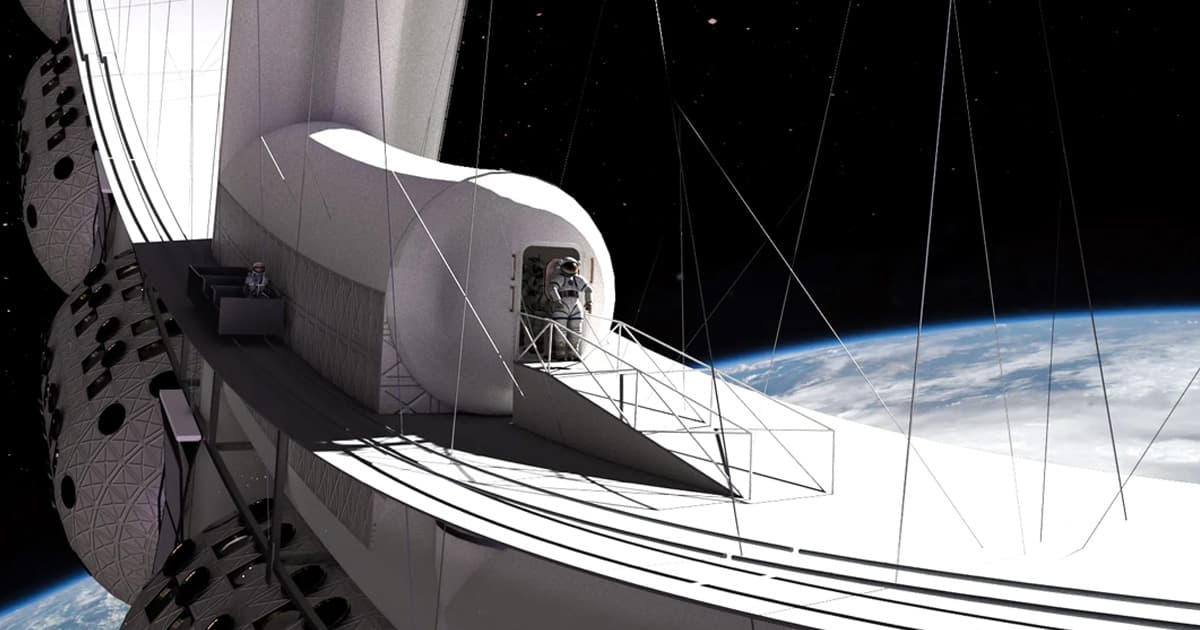 The robot managed to churn out a metal framework the length of a football field.

The robot managed to churn out a metal framework the length of a football field.

Orbital Assembly Corporation, a company that claims to be the "first large-space space construction company" on its website, has unveiled an early prototype robot capable of churning out parts for a ring-shaped luxury hotel that it says will one day orbit the Earth.

The company, run by NASA veterans, has some ambitious goals: it's looking to start construction on what it calls the Voyager Space Station as soon as 2023, a massive circular luxury space hotel that spans 650 feet.

By spinning on its axis, the hotel could allow future vacationers to experience levels of gravity similar to that of the Moon.

If all goes well — a major "if," because the startup clearly still has an immense amount of work to do — the Voyager could open up to 400 guests at a time as soon as 2027, an extremely ambitious timeline.

To construct the behemoth structure, OAC is hoping to send semi-autonomous robots to space and have them put the various parts together there.

The DSTAR is capable of assembling tall metal structures that could one day make up the Voyager Space Station's framework.

"Watching the DSTAR assemble the six-ton truss framework and expand to the length of a football field as it will in space was a thrill for everyone," Alatorre said in the statement. "We are on track for our first mission launch deadline scheduled for 2023."

As part of that mission, DSTAR's successor, the Prototype Structural Truss Assembly Robot (PSTAR), could make its way to low-Earth orbit to start testing if the technology can work in microgravity just as well.

PSTAR will attempt to put together a 156 foot section that will make up the circumference of a ring, a small-scale uncrewed prototype of the much bigger Voyager Space Station.

Four propulsion modules in the center will then  attempt to start spinning the ring, possibly the first large-scale demonstration of artificial gravity caused by rotation, according to Interesting Engineering.

While space tourism is making leaps and bounds towards becoming a feasible form of vacationing — albeit only for the super rich for the time being — the dream of a rotating luxury space hotel is truly inspiring.

But whether it will be able to "open its doors" to visitors by 2027 is anything but certain.

More on space hotels: The Race is Heating Up to Open the First Space Hotel

Sad ROSS
Russia's New Space Station Gets Sadder the More We Hear About It
Jul 27
Read More
Blast Off
Former Astronaut Details Quest to Grow Cannabinoids in Space
Apr 20
Read More
Billionaire Space Club
Man Getting Paid to Fly Rich Guys to Space Says Don't Worry, They're Not Just Idle Tourists
Feb 28
Read More
+Social+Newsletter
TopicsAbout UsContact Us
Copyright ©, Camden Media Inc All Rights Reserved. See our User Agreement, Privacy Policy and Data Use Policy. The material on this site may not be reproduced, distributed, transmitted, cached or otherwise used, except with prior written permission of Futurism. Articles may contain affiliate links which enable us to share in the revenue of any purchases made.
Fonts by Typekit and Monotype.