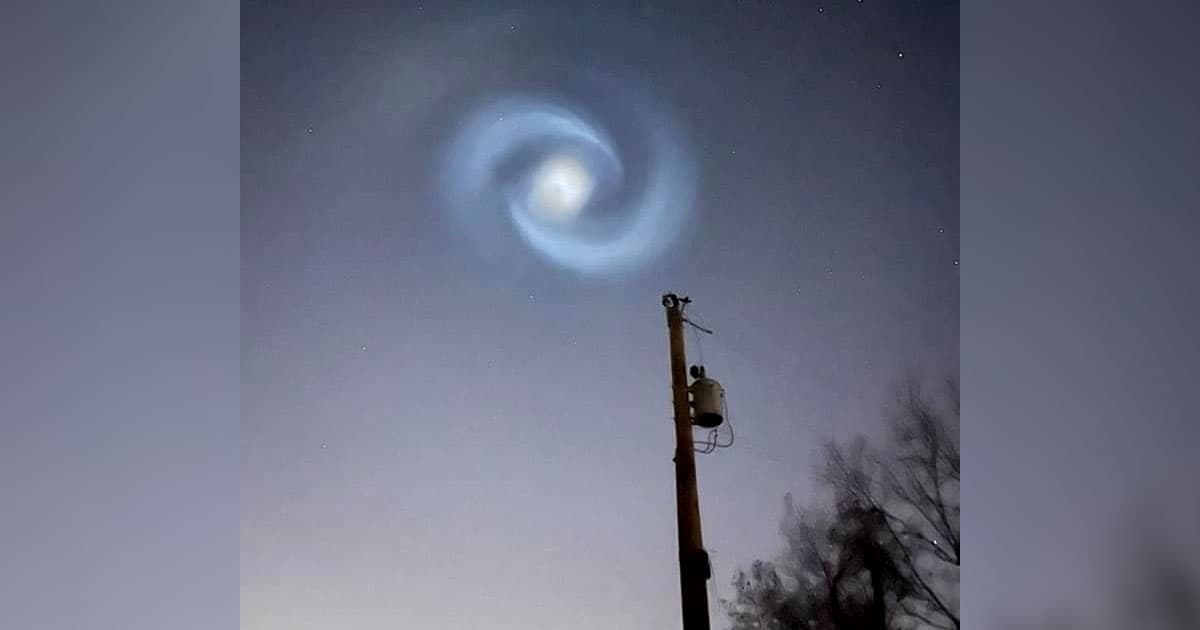 Oklahomans Saw a Spiral-Shaped UFO, But It Turned Out to Be SpaceX

This has got to be one of the coolest SpaceX sightings on record.

This has got to be one of the coolest SpaceX sightings on record.

At the end of January, Oklahomans were stunned by both an earthquake and an unidentified flying object that meteorologists believe to be a SpaceX rocket.

As Tulsa's FOX23 affiliate reports, people in the Sooner State shot some pretty stunning videos and photos of the strange object in the skies above.

Though it was launched from Florida's Cape Canaveral, FOX23 meteorologist Laura Mock tweeted that she's "pretty sure" the bizarre formation over Tulsa and Oklahoma City's night skies was none other than a SpaceX Falcon 9. She later told the TV station that, when she cross-checked the SpaceX livestream, she concluded that "this rocket would have flown very close to Oklahoma."

"The rocket was going through [its] final orbital burn over the center of the country after already circling the globe once," Mock added.

According to Mike Collier, the chief meteorologist for Tulsa's KJRH, the unique spiral pattern that appeared around the rocket was likely caused by the rocket's second stage fuel release mechanism.

Given that the spectacle occurred the same day as a surprise earthquake rocked the entire region and, of course, the strange spiral formation surrounding it, it's no wonder people thought it wasn't terrestrial.

Sped up footage over several minutes, but caught what appears to be part of the @spacex launch in Bixby, Oklahoma on my camera facing west around 6:50 PM this evening! Reports of it being sighted all over the central US! #okwx #rocket #ufo pic.twitter.com/seF1nzY8vb

Interestingly enough, this isn't the first "UFO" sighting attributed to a SpaceX craft in the region.

Last April, Oklahoma City's KFOR news station reported that the strange string of lights that, to be fair, looks very different from this most recent sighting, was in fact a series of SpaceX's Starlink satellites.

The company made headlines early last year when a SpaceX craft had a close call with yet another unidentified object on its way to the International Space Station.

The more launches SpaceX completes, the more terrestrial sky-watchers will get a chance to spot these fantastical crafts — and, if only for a little while, wonder whether the truth really is out there.

READ MORE: Reports of UFO sightings in Green Country have been verified as a SpaceX rocket [Fox23 Tulsa]

More SpaceX/UFO mashups: SpaceX’s Spacecraft Just Had a Near Collision With an Unidentified Object