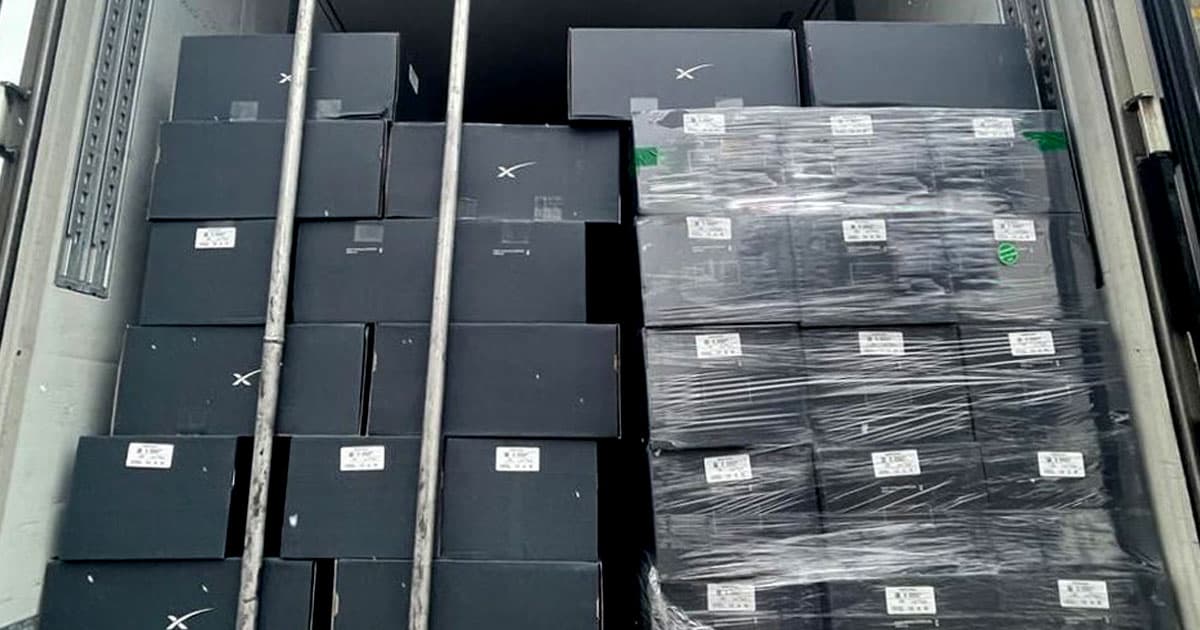 SpaceX Sends More Starlink Terminals to Ukraine, Along With Equipment to Run Them Off Grid

SpaceX and Tesla CEO Elon Musk is keeping his promise of hooking Ukrainians up with Starlink terminals, giving them a reliable way to connect to the internet as Russian troops continue their invasion — and this time, he's throwing in some extra equipment to keep them running, even off the grid.

"Received the second shipment of Starlink stations!" Ukrainian vice prime minister Mykhailo Fedorov tweeted on Wednesday, accompanied by a picture of what appear to be several pallets of Starlink terminals inside a truck.

The space company is intent on making its internet broadband solution work even as Ukraine's power grid suffers under Russia's advances.

"You’re welcome," Musk replied. "We have also sent power adapters for car cigarette lighters, solar/battery packs and generators for places where electricity is not available."

According to an email Tesla sent to Ukrainian employees, as obtained by CNBC, the car company also delivered numerous Tesla Powerwalls — large battery packs normally meant to provide a household with energy storage — to power the Starlink terminals.

Tesla had to get creative on such short notice, and put together the battery pack systems in just three days with "AC cables made out of scrap" from the company's Gigafactory in Berlin, according to the email.

It's the second shipment Ukraine has received since the invasion began. Last week, Fedorov said that "Starlink keeps our cities connected and emergency services savings lives" after receiving the first shipment on February 28.

It's still unclear how many Starlink terminals SpaceX has delivered in total — but Tesla claims in its email that the number is in the hundreds.

Tesla is also giving its employees in the embattled country another big leg up.

"For any Tesla employees who is a Ukrainian national and has been asked to return to Ukraine for active duty as a reservist," the company's email reads, "we will maintain their employment and salary for 3 months, with a view to assessing after this period as needed."

READ MORE: Tesla will pay Ukrainian employees for up to 3 months if they are conscripted to fight [CNBC]

More on SpaceX: Elon Musk Says SpaceX Is So Busy With Ukraine That It'll Delay Starship