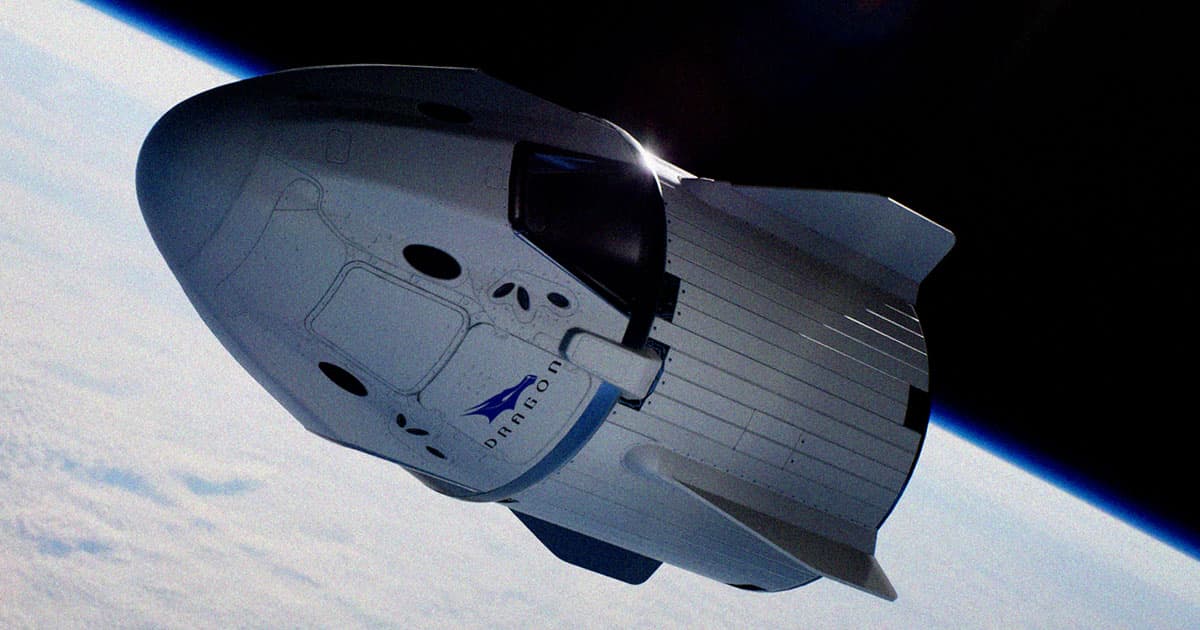 "If it landed on your house it would make a hell of a mess."

"If it landed on your house it would make a hell of a mess."

A sheep farmer in New South Wales, Australia, made a highly unusual discovery: a massive artifact wedged into a remote part of his paddock.

The roughly eight-foot structure appeared to have made its way all the way from space after its blistering journey through the atmosphere, with experts speculating that it may have been a jettisoned piece once belonging to a SpaceX Dragon spacecraft, Australian broadcaster ABC News reports.

In fact, the piece may date back to SpaceX's first operational crewed flight back in November 2020 — though SpaceX has yet to confirm the news.

"I just got back from Dalgety, NSW," tweeted Brad Tucker, an astronomy research fellow at the Australian National University. "I was busy confirming that parts of a SpaceX Crew-1 Trunk capsule crashed into a few paddocks in rural NSW."

I just got back from Dalgety, NSW. I was busy confirming that parts of a @SpaceX Crew-1 Trunk capsule crashed into a few paddocks in rural NSW! More info to come:https://t.co/2VJzeYMhhn pic.twitter.com/sQsE4WAxRq

It's not every day we hear of SpaceX space junk impacting with solid ground rather than an ocean. The company has pioneered the development of reusable rockets, which can make their safe return back to landing ships. Other pieces are intentionally sent on a trajectory to eventually impact the Pacific or Atlantic Ocean.

This latest incident, however, seems to show that not everything goes according to plan.

Pieces like this one are designed to mostly burn up in the atmosphere, but "large pieces don't," Rebecca Allen, Swinburne University of Technology astronomer, told ABC. "This is quite worrying, and shows it's critical to track debris."

The news comes as experts are tracking a massive piece of a Chinese Long March 5B rocket, which is predicted to make its uncontrolled descent through the atmosphere this weekend — only the latest in a series of uncontrolled reentries by China.

Tucker highlighted the charring on the Australian debris, "which you would expect from re-entry," he told ABC. "It is very rare to see, because they don't usually land on land, but in the ocean."

According to Tucker, the debris likely came from the unpressurized portion of the spacecraft and is potentially the biggest piece of space junk ever recorded in Australia since 1979, when a piece of NASA's Skylab space station landed in some bushes near Esperance in Western Australia.

In a follow-up tweet, Tucker pointed out that the trunk of the Crew-1 spacecraft "was jettisoned and stayed in orbit until re-entering on 9 July."

The illustration below shows the trunk section.

"I didn't know what to think, I had no idea what it was," sheep farm owner Mick Miners told ABC.

"I didn't hear the bang, but my daughters said it was very loud," neighboring farmer Jock Wallace added.

Wallace also pointed out the potential dangers of having massive pieces of space junk make it through the atmosphere intact.

"I think it's a concern it's just fallen out of the sky," he told the broadcaster.

"If it landed on your house it would make a hell of a mess," he added.