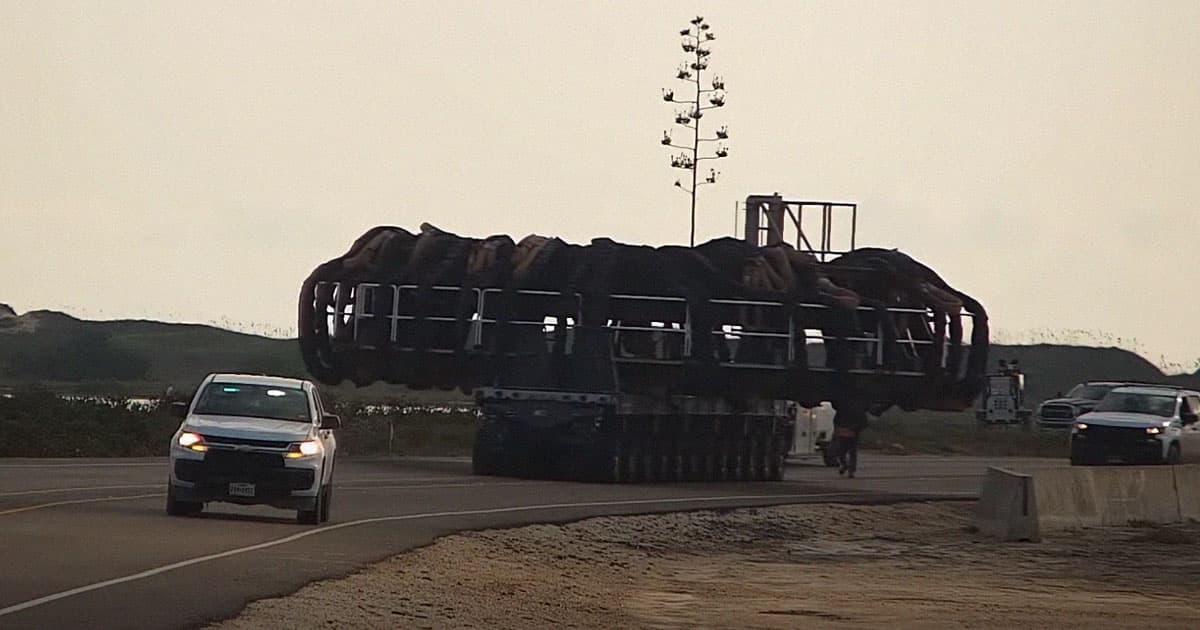 OK, this is pretty badass.

OK, this is pretty badass.

For a company whose whole job is badass rocketry, SpaceX sure does flex — as new footage of one of its ground-based monstrosities, known as the "Can Crusher," demonstrates yet again.

The Can Crusher in this video was seen rolling down the Boca Chica, TX base as it heads to test components for Starship B7.1, which SpaceX is currently working on assembling.

It's not a massive Tarantula; it's the "Can Crusher" - that was recently used to induce loads on Test Tank B7.1.

Bergin's video is the latest glimpse we've gotten of this arachnid-esque Can Crusher, but it's not the first time we've seen it either at SpaceX or elsewhere.

As the name suggests, the spaceflight industry's can crushers are giant compactors that, in essence, do the same thing that aluminum can compactors do to empty soda cans — except these operate on a much larger, and much more dangerous, level.

"Place a soda can on the floor in an upright position and then stand on it -- gradually applying weight -- until the can ripples and collapses," a NASA post from 2011, when the agency undertook the world's largest can crusher test at the time, reads. "It's similar to what a team of NASA engineers will do to an immense aluminum-lithium rocket fuel tank in late March; their hope is to use data from the test to generate new 'shell-buckling design factors' that will enable light-weight, safe and sturdy 'skins' for future launch vehicles."

In essence, can crushers like those used by NASA and SpaceX are meant to simulate the force of takeoff and test to make sure rocket components are ready for the stress of the entire ordeal.

While NASA's original can crushers look a lot like their smaller, consumer-grade counterparts, the one employed by SpaceX is as next-generation as the company's rockets. Those "tentacle"-looking things are actually spread out like bungees during testing to secure whichever part is being stress-tested, as previous renders show.

Though can crushers have been a big part of pre-launch rocket testing for more than a decade, we don't often get to see that part of the action — which is why this video of the deflated equipment being rolled around on the launchpad looks all the weirder.