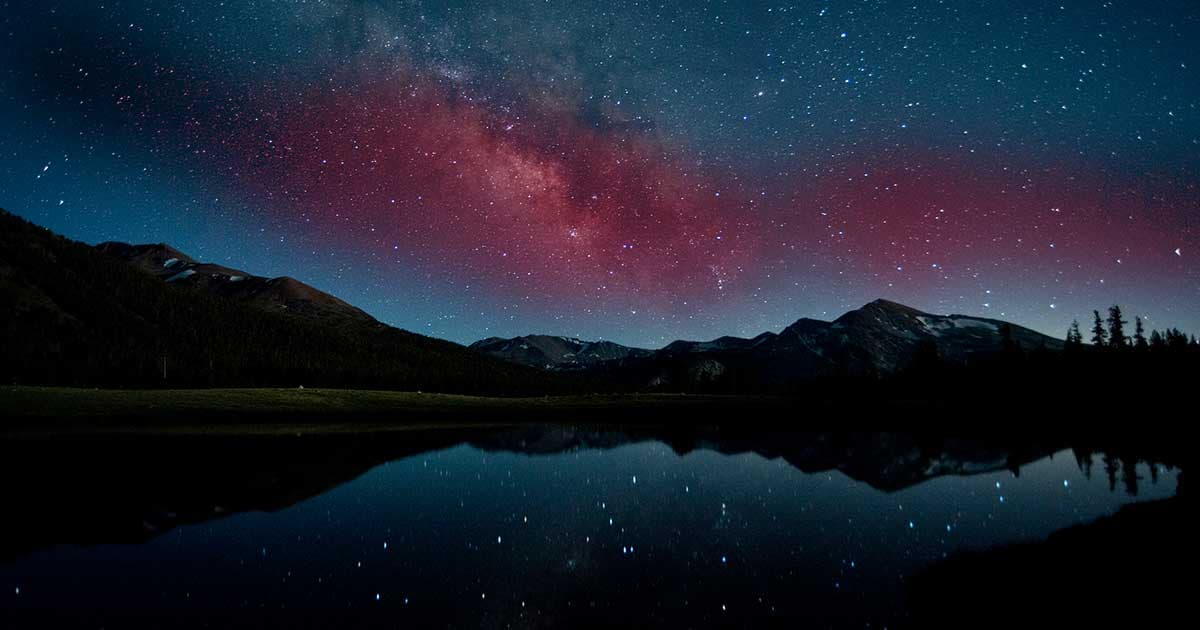 "I was shooting the Milky Way behind some silhouetted rocks when suddenly one of my images had this prominent red blob right in front of the core, that had not been there in the previous image 3 minutes before," photographer David Johnston wrote in a June 19 Facebook post.

"I was really annoyed because it ruined my picture, but I figured it would go away," he added. "Instead it grew over the next several images and extended to cover a large part of the southeastern sky."

Falcon 9 leaves a red glow in the sky from moonlite space jellyfish! I think this is the first time I’ve seen the moon create the jellyfish effect!https://t.co/y8WKnjvuPA#spacex #falcon9 #nikon #nikonz6 #nikonnofilter #spacejellyfish pic.twitter.com/hcgEJlu84B

The photographer later realized that the first red-tinted image he took — the effect isn't visible to the naked eye — almost perfectly coincided with the timing of SpaceX's launch and reentry engine burn of its first stage making its return to the ground.

Before figuring out what he was looking at, Johnston later told WaPo that he "had no idea what this was and it was kind of freaking me out."

Space weather experts later confirmed that the photographer's suspicion was likely correct. Oxygen ions generated from Falcon 9's second stage igniting react with other molecules in the night sky, which in turn excite electrons and produce a red glow.

"This glow is probably the exhaust gasses from the rocket's second stage, causing the ionosphere to recombine quickly," Boston University physicist Jeff Baumgardner told SpaceWeather.com. "This is a well-studied phenomenon when rocket engines are firing in the altitude 200-250 km (124-155 miles)."

It's unclear how harmful these red glows are to the global environment. While experts are still investigating the full environmental impact of rocket launches, there are already some early signs that we should be worried — which is especially relevant considering that launches are rapidly becoming more frequent.

READ MORE: SpaceX launch may have cast an invisible red glow over the night sky [The Washington Post]

NASA’s New Tech Could Bring Power to People “In the Middle of Nowhere”
8. 18. 17
Read More
International Stink Station
New Details Emerge About the "Peculiar Odor" on International Space Station
3:44 PM
Read More
Apple Car News
Apple Gives Up on Making Its Upcoming Car Fully Autonomous
Yesterday
Read More
+Social+Newsletter
TopicsAbout UsContact Us
Copyright ©, Camden Media Inc All Rights Reserved. See our User Agreement, Privacy Policy and Data Use Policy. The material on this site may not be reproduced, distributed, transmitted, cached or otherwise used, except with prior written permission of Futurism. Articles may contain affiliate links which enable us to share in the revenue of any purchases made.
Fonts by Typekit and Monotype.