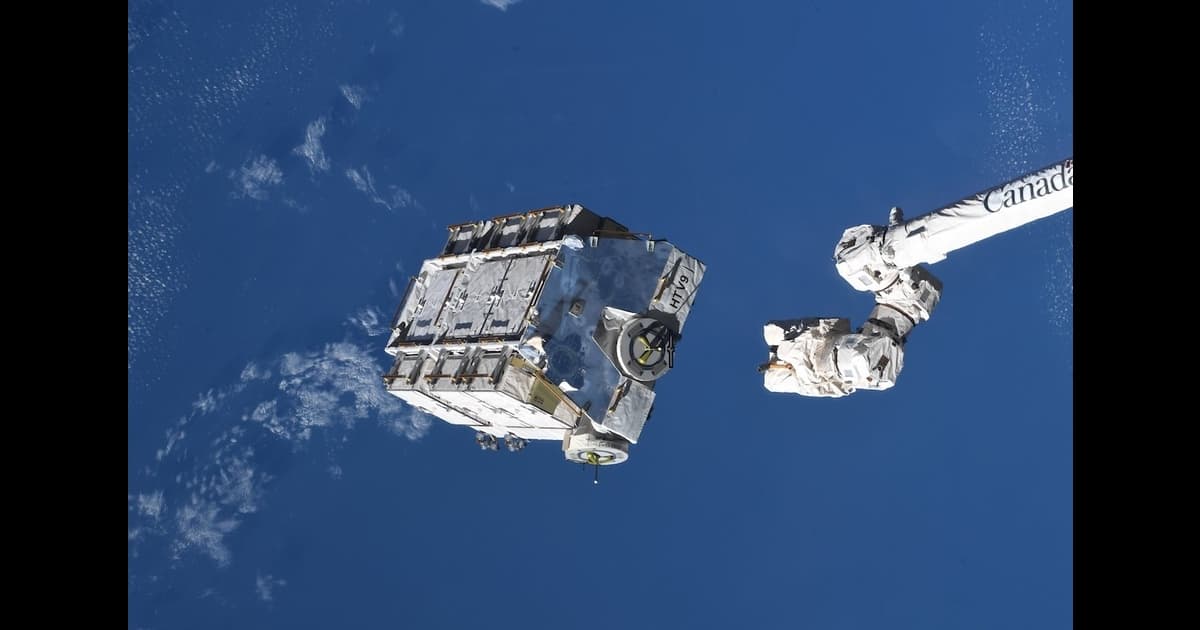 The Space Station Just Released Its Largest Piece of Garbage Ever

Take Out The Trash

The trash is a whopping 2.9-ton cargo pallet of old batteries that was used to power the station, according to Spaceflight Now. The garbage is expected to orbit the Earth for two to four years before it enters the atmosphere.

A Hunk, A Hunk Of Burnin’ Batteries

If you’re worried about a nearly three ton pallet of batteries landing on your house one day, don’t fret: the garbage jettisoned from the ISS is typically burned up upon re-entry.

In fact, the H-II Transfer Vehicles (HTV) used by the Japanese space program to transport supplies to the ISS is typically disposed into orbit once it accomplishes its missions. Eventually, the HTV burns up on re-entry with any remaining pieces landing in the Pacific Ocean.

Likewise, the pallet is expected to burn up as it enters the atmosphere "harmlessly," said Leah Cheshier, a NASA communications specialist, to Spaceflight Now.

So yeah, it'll just be some harmless flaming batteries hurtling towards the Earth at unfathomable speeds. Very comforting!

Though you wouldn’t think so, space is actually a really messy place — or at least that’s the case with the space around Earth.

Space debris is mostly made up of pieces of spacecraft, defunct satellites, and rocket parts that zoom around our planet in low Earth orbit, according to NASA. Like garbage on the ground, orbital debris can pose a massive danger — especially when you consider the fact that the trash can hit speeds of 18,000 miles per hour.

Luckily, there are some initiatives proposed to "recycle" the orbital garbage. But it doesn’t really help when billionaires keep sending their cars into space.

Monkey Business
China Plans to Send Monkeys to Space Station to Have Sex With Each Other
11. 3. 22
Read More
Overview Effect
William Shatner Says His Space Trip Left Him With a Feeling of Terrible Grief
10. 11. 22
Read More
God Shot
Astronaut Says He Had Religious Experience During Spacewalk
9. 9. 22
Read More
+Social+Newsletter
TopicsAbout UsContact Us
Copyright ©, Camden Media Inc All Rights Reserved. See our User Agreement, Privacy Policy and Data Use Policy. The material on this site may not be reproduced, distributed, transmitted, cached or otherwise used, except with prior written permission of Futurism. Articles may contain affiliate links which enable us to share in the revenue of any purchases made.
Fonts by Typekit and Monotype.