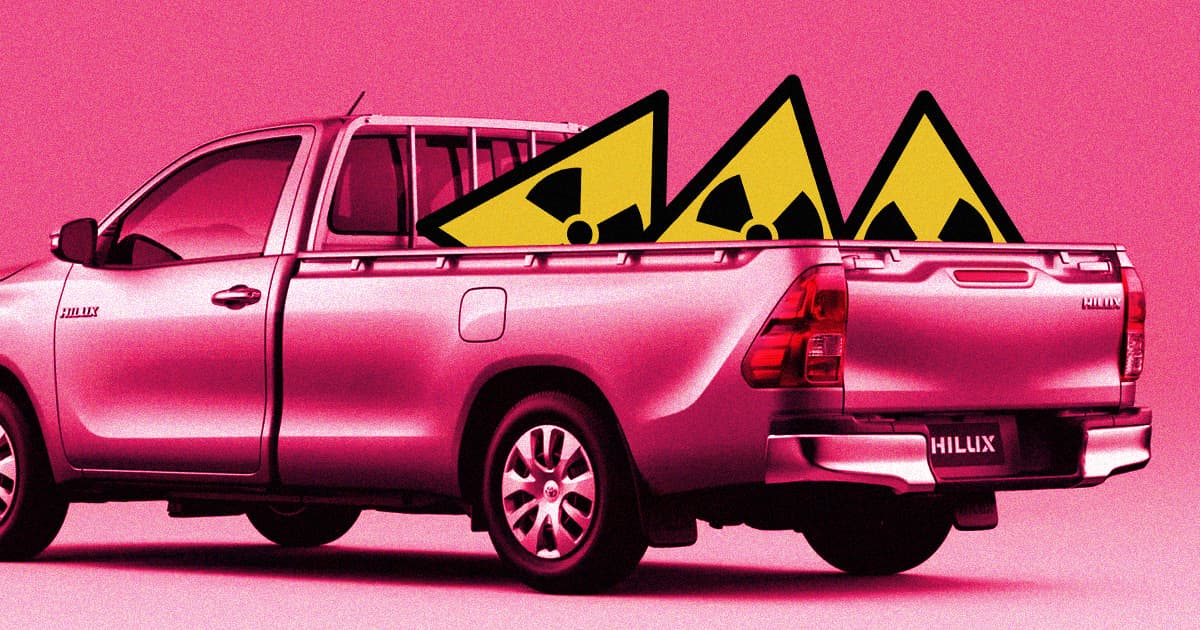 Don't Come Near Me

A truck carrying highly radioactive materials has been stolen by armed criminals in central Mexico, The Independent reports.

The Mexican government is now warning that anybody who comes in close contact with its deadly payload could be risking their lives.

The individuals got away with an industrial inspection equipment truck during an armed heist on Sunday in the town of Teoloyucan. Included in the bounty is a QSA Delta 800 gamma ray projector that holds radioactive iridium-192, selenium-75 and ytterbium-169 isotopes — a highly unusual bounty for any hijacker.

It's still unclear why they targeted the truck in question, but during a previous robbery involving radioactive waste, Mexican authorities feared the ingredients may be used to build a dirty bomb.

Contact with the contents of the truck, authorities emphasized, can be fatal.

"At 10am today, there was a robbery of radiographic equipment reported," reads a warning issued by the National Commission for Nuclear Security and Safeguarding, as quoted by the Independent. "If the radioactive material is extracted from the container, is moved, or makes direct contact with any persons handling it, permanent injury can occur in minutes."

"In case of making direct contact with the source over the course of hours or days, the effects can prove fatal," the warning reads.

Even just being 30 meters away could cause radiation poisoning, according to the Commission.

Members of the Commission for National Civil Protection (CNPC) have been dispatched across the central region of Mexico. Authorities have not ruled out the possibility that the truck may now be in Mexico City.

During the ongoing COVID-19 pandemic, robberies have been on the rise in Mexico, with increasing reports of medical oxygen tanks being hijacked.

Nuclear materials, though, are an unusual target for any robbery. Plenty of questions remain, with the most obvious one being: what the hell are they planning to do with it? If history is anything to go by — believe it or not, this isn't the first time hijackers got away with radioactive materials in the country — cartels may be trying to use it as part of a dirty bomb, as The Independent reports. But it's still unclear if that's the case here as well.

More on Mexico: The President of Mexico Said Religious Amulets Would Protect Him Against COVID. Then He Caught It.