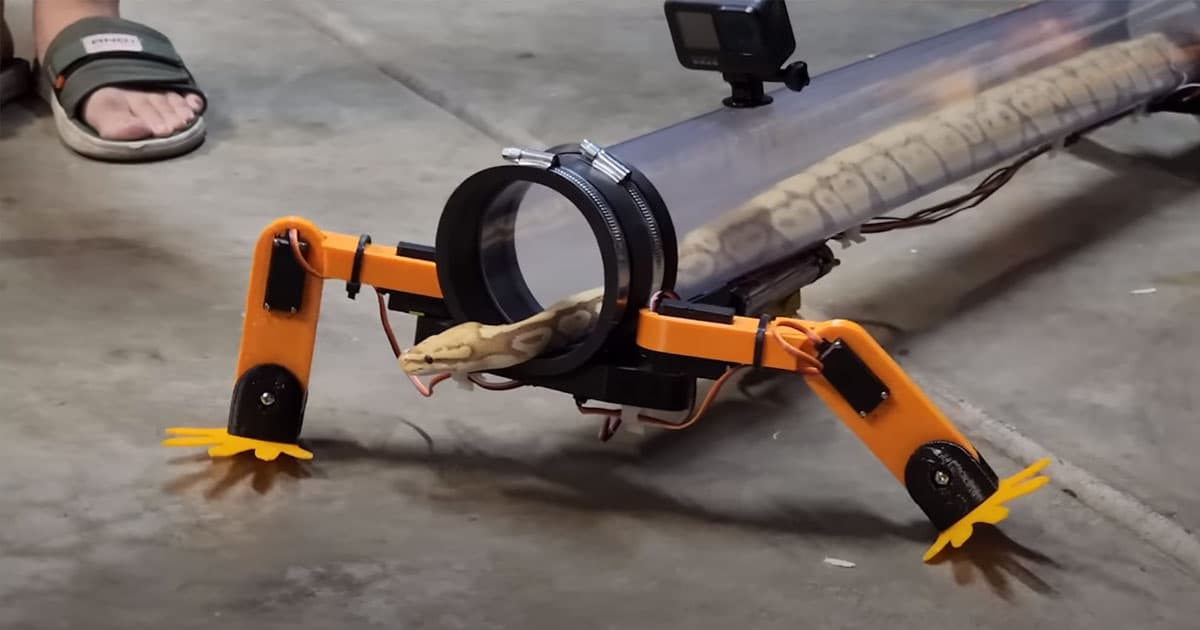 Great, they're giving snakes legs now — or, as one science vlogger claimed, giving them their legs "back."

In a recently-uploaded video, creator and self-professed snake lover Allen Pan said that he "feel[s] bad for snakes" because "they lost their legs" to evolution. To right that injustice, he ended up making a robotic exoskeleton for them in an effort to help them "find" their lost legs.

The result? An amazingly goofy 3D printed exoskeleton that let one lucky python strut around like she owned the place.

Pan pointed to the fact that snakes' legs aren't gone entirely — they exist while snakes are in utero, and when they're born, they still have vestigial leg-like... structures.

"It turns out that snakes do have two legs when they're embryos," the vlogger said, "but their DNA is all fucked up so the genes that are supposed to grow two legs, uh, grow two penises instead." (This is true.)

"They can't walk on those," he added.

After an initial try that resulted in too much snake droopage, Pan settled on a 2.0 version of the exoskeleton with four legs — two in front and two in back, which is similar to the Western three-toed skink, a lizard with four teeny tiny legs — that featured a long tube that snakes could easily get in and out of as they pleased. Unfortunately, the snake doesn't yet decide where the robot walks, though Hackaday speculated about how that could be achieved as well.

To test the rig, Pan contacted a snake handler and breeder who goes by the handle "Granddaddy Herp" and was able to get a large and beautiful yellow ball python into the prosthetic and zooming around on the legs. That was enough to to convince Pan that snakes do, indeed, "want their legs back."

"I cannot get over the image of the snake crawling into its robotic exoskeleton," the science vlogger said.

And honestly, neither can we.