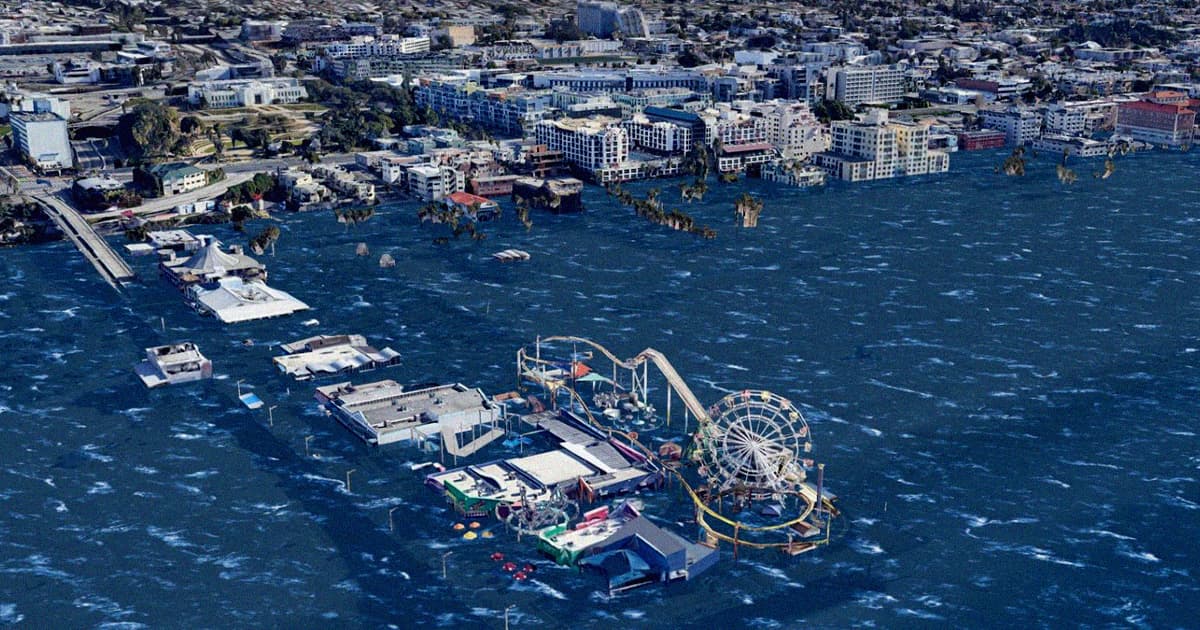 Shocking new visualizations by the nonprofit Climate Central shows just how much populated land would be lost to rising sea levels resulting from even a modest amount of global warming.

The images produced by the nonprofit show various landmarks around the world at present day, contrasted with the flooding that would occurr if global warming continues unabated.

An estimated ten percent of the land where the world's population currently lives could be underwater by the year 2100, at which point the Earth could exceed the 5.4 degree Fahrenheit warming threshold, The Guardian reports — that is, if we don't take drastic action.

The changes are striking — the Space Center in Houston would be completely flooded by the time global warming cranks up the heat. Santa Monica Pier would be largely under water. Even the Pentagon could end up being close to flooding.

The visualizations were released ahead of the 2021 United Nations Climate Change Conference in Glasgow.

"The decisions that we make at Glasgow and the actions that we take this decade will ramify for hundreds and thousands of years," Benjamin Strauss, CEO and chief scientist at Climate Central, told The Guardian. "This group is going to be remembered for what they chose: did you choose a thriving future with a livable climate or did you choose to drown the coastal places of the world?"

According to Strauss, "we’ve seen about a foot of sea level rise over the last century."

"Over the next century, we could experience anywhere between ten and 30 feet," he added.

READ MORE: What sea level rise will do to famous American sites, visualized [The Guardian]

More on global warming: The Climate Projection for 500 Years From Now Is Unbelievably Bad

Tornado Watch
Tornadoes Like Kentucky's May Be Getting Stronger Due to Climate Change, Scientists Say
12. 12. 21
Read More
Run AMOC
Scientists Warn Gulf Stream May Collapse, Freezing North America
8. 5. 21
Read More
Better Late Than Never
US Formally Rejoins Paris Climate Agreement
2. 19. 21
Read More
+Social+Newsletter
TopicsAbout UsContact Us
Copyright ©, Camden Media Inc All Rights Reserved. See our User Agreement, Privacy Policy and Data Use Policy. The material on this site may not be reproduced, distributed, transmitted, cached or otherwise used, except with prior written permission of Futurism. Fonts by Typekit and Monotype.