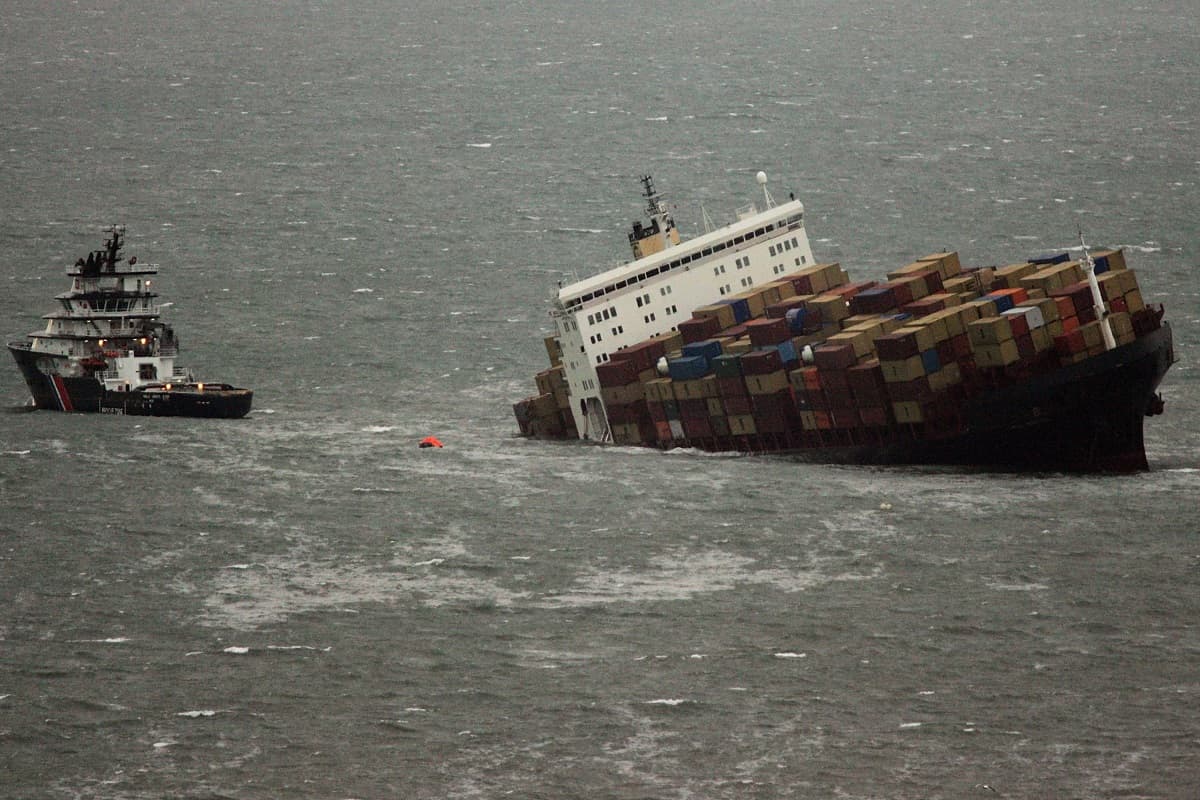 A container ship encountered rough seas  in Canadian waters on Friday, causing about 40 shipping containers to fall overboard — and several, authorities are warning, contain "spontaneous combustibles" that could ignite or explode when exposed to air or water.

The US and Canadian Coast Guards say they're both working to find the hazardous containers, which fell off a cargo vessel called the Zim Kingston near the Strait of Juan de Fuca on Canada's west coast, and have already located some of them.

"Two of the containers have been identified as carrying spontaneous combustibles," US Coast Guard spokesperson Diolanda Caballeros told the Vancouver Sun. "They are currently drifting north but we can’t predict which way they will go because of the heavy weather. The bomb cyclone (storm) is around that area."

It remains unclear exactly what the containers contain, but according to Cornell University, "spontaneous combustibles" refer to volatile chemicals that can "spontaneously ignite in the presence of air" or even water vapor, such as white phosphorous. With such a vast swathe of the global economy relying on container shipping, wrecks can pose substantial environmental hazards, as when the MSC Napoli — pictured above — ran aground in 2007.

It's also unknown whether the contents of the containers will pose an environmental risk, although a Canadian government representative told the Vancouver Sun that an analysis of "pollution threats and hazards" is ongoing.

The most immediate concern, though, is that a ship could hit the partially submerged containers and prompt a fire or explosion, with the US Coast Guard Navigation Center warning vessels to "exercise extreme caution" in the region.

More on shipping containers: Here’s How Many Shipping Containers You Could Fit Inside SpaceX’s Starship

Stealing Gas
Bitcoin Miners Open Secret Power Plant, Get Busted
10. 7. 21
Read More
China Isn't Taking Our Recycling. Here's What We Could Do With It Instead.
5. 30. 18
Read More
A Fleet of Underwater Robots Will Create Detailed Map of Marine Microbes
3. 13. 18
Read More
+Social+Newsletter
TopicsAbout UsContact Us
Copyright ©, Camden Media Inc All Rights Reserved. See our User Agreement, Privacy Policy and Data Use Policy. The material on this site may not be reproduced, distributed, transmitted, cached or otherwise used, except with prior written permission of Futurism. Articles may contain affiliate links which enable us to share in the revenue of any purchases made.
Fonts by Typekit and Monotype.