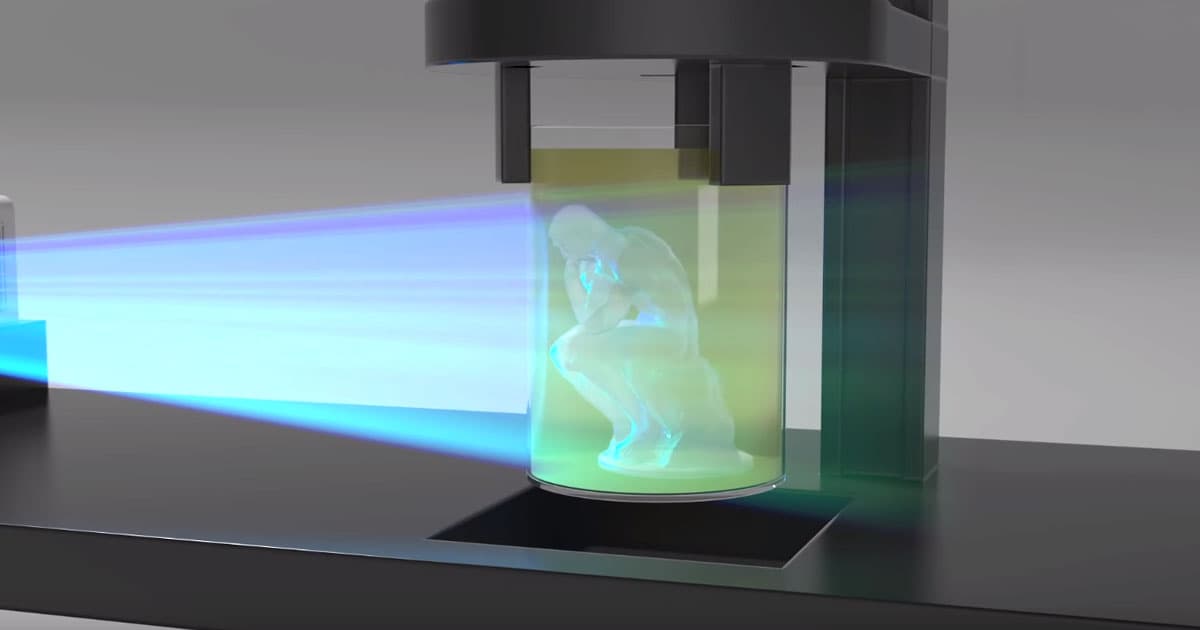 3D printers work by laboriously printing objects layer by layer. For larger objects, that process can take hours or even days.

But now scientists at the University of California, Berkeley have found a shortcut: a printer that can fabricate objects in one shot using light — and which could, potentially, revolutionize rapid manufacturing technology.

The research, published in the journal Science yesterday, describes a printer the researchers nicknamed "the replicator" in a nod to "Star Trek."

It works more like a computed tomography (CT) scan than a conventional 3D printer. It builds a 3D image by scanning an object from multiple angles, then projects it into a tube of synthetic resin that solidifies when exposed to certain intensities of light. In two minutes, for instance, the team was able to fabricate a tiny figurine of Auguste Rodin's famous "The Thinker" statue.

The replicator might have groundbreaking implications, but it does have some inherent limitations as well: the objects it produces are small, and require special synthetic resin to produce.

But it's an exciting new technology — and one that could lead to a "Star Trek" future.

READ MORE: Forget everything you know about 3D printing — the ‘replicator’ is here [Nature]

More on 3D printing: We Can Now Easily 3D Print With Metal

From the Dept. of Things to Buy
Anycubic Photon M3 3D Printer Review: Create Your Own Miniatures at Home
11. 22. 22
Read More
The 'Hexbot' Transforms Your Desk Into a 3D Printer and High-Tech Assembly Line
2. 5. 19
Read More
A Robot Can Print This $32,000 House in as Little as 8 Hours
5. 15. 17
Read More
+Social+Newsletter
TopicsAbout UsContact Us
Copyright ©, Camden Media Inc All Rights Reserved. See our User Agreement, Privacy Policy and Data Use Policy. The material on this site may not be reproduced, distributed, transmitted, cached or otherwise used, except with prior written permission of Futurism. Articles may contain affiliate links which enable us to share in the revenue of any purchases made.
Fonts by Typekit and Monotype.