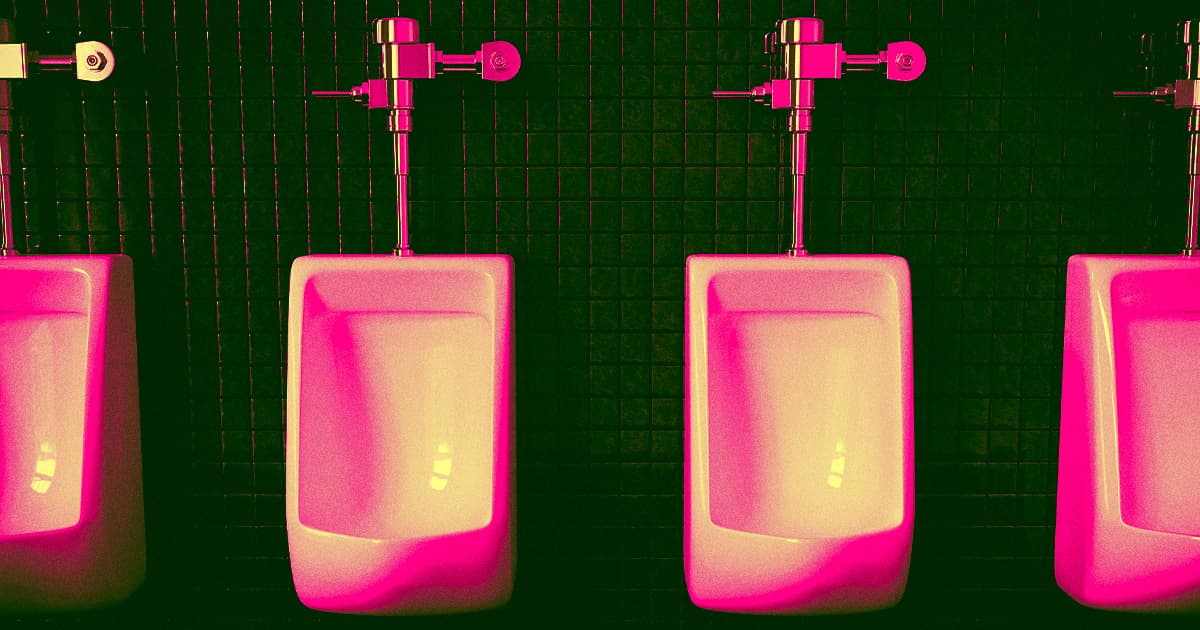 Urinals are convenient, but they're not known for their cleanliness. Splashback is both annoying and unsanitary, not to mention a gross problem for those that keep our bathrooms clean.

So scientists at the University of Waterloo in Canada took it upon themselves to design the perfect splash free urinal.

"I think most of us have been a little inattentive at our post and looked down to find we were wearing speckled pants," Zhao Pan, a mechanical and mechatronics engineering professor at Waterloo, told New Scientist. "Nobody likes having pee everywhere, so why not just create a urinal where splatter is extremely unlikely."

Physicists have finally figured out how to design a urinal that cuts back on splatter – the idea originated exactly where you think it did https://t.co/bF8dlynEIg

The team's first step in designing a pee-predicament-preventing urinal was finding the best angle for a stream to hit the porcelain.

Here, dogs lived up to their moniker of man's best friend. Pan and his team used computer simulations of how dogs pee to help find the "magic angle" at which there's as little splashback as possible.

They then moved the research into a lab by shooting water at varying angles and at various forms of urinals — two that the scientists designed, and another two designed after conventional, commercially available models. Unlike real urinals, however, these were made of a dense foam coated in epoxy.

To determine which resulting sprays were the messiest, the scientists soaked up any errant liquid in paper towels each time, which were then weighed against their dry weight. The more liquid, the more splashback.

All that wet work led the team to conclude that the "magic angle" for pee to hit a urinal was around 30 degrees. From there, the scientists further tinkered with their designs so that anytime someone goes for a tinkle, the stream stays as close as possible to that angle.

The best design for most heights, they found, was the "Nauti-Loo." The cheekily named urinal, second from the right in the tweet above, is noticeably long and narrow compared to conventional ones. At its bottom, it abruptly curves outward — like a nautilus shell — forming a descending, triangular lip.

According to the scientists, conventional urinals produced up to 50 times more splashback than their premier design.

Now, the next time you go to the loo at a public bathroom and see pee everywhere, you might find yourself wishing it had the Nauti-loo.

Toilet Trouble
Public Toilet Requires QR Code to Access, Tracks Your Cleanliness Score
8. 30. 22
Read More
Save Yourselves
Furious Marsupial So Thirsty For Sex That It’s Dying, Scientists Warn
Yesterday
Read More
We're in Hell
Scammers Are Already Convincing Idiots They Can Get Rich Using ChatGPT
Yesterday
Read More
+Social+Newsletter
TopicsAbout UsContact Us
Copyright ©, Camden Media Inc All Rights Reserved. See our User Agreement, Privacy Policy and Data Use Policy. The material on this site may not be reproduced, distributed, transmitted, cached or otherwise used, except with prior written permission of Futurism. Articles may contain affiliate links which enable us to share in the revenue of any purchases made.
Fonts by Typekit and Monotype.