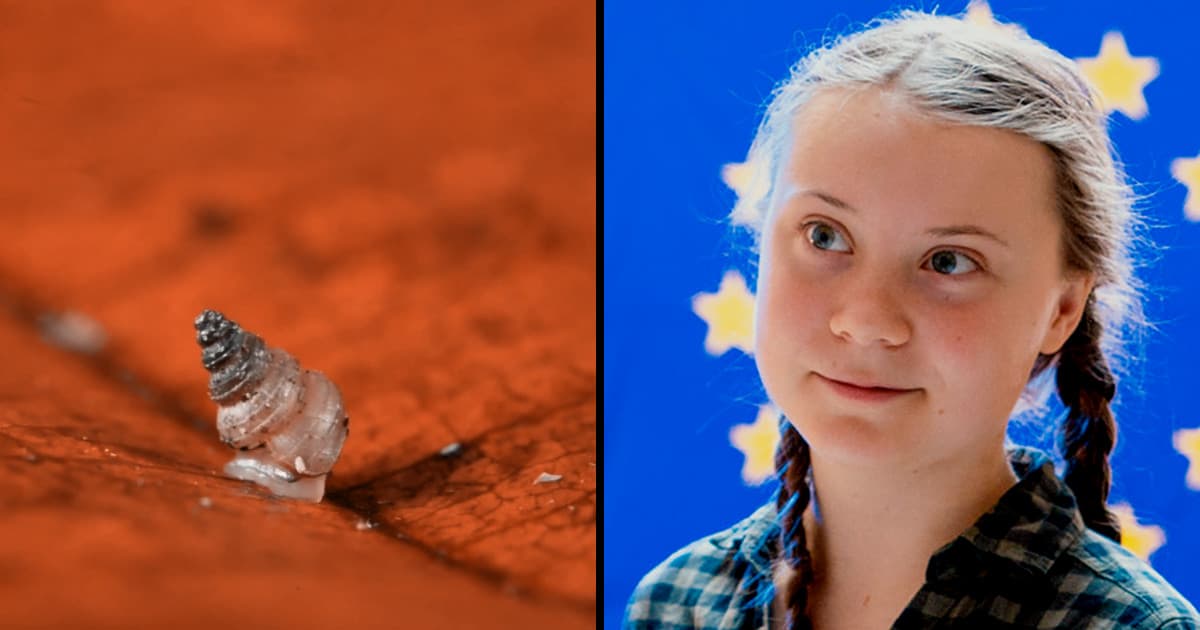 The actual Greta Thunberg was reportedly "delighted" to have this species named after her.

The actual Greta Thunberg was reportedly "delighted" to have this species named after her.

A Snail is Born

While on an expedition in Brunei's Ulu Temburong National Park, a team of researchers and citizen scientists discovered a never-before-classified species of snail.

After taking a vote, they decided to name it Craspedotropis gretathunbergae — after teenage climate activist Greta Thunberg.

Details about the new snail, published today in the Biodiversity Data Journal, suggest that Thunberg is an appropriate namesake.

Craspedotropis gretathunbergae is incredibly sensitive to changes in weather and temperature, according to its discoverers.

"Naming this snail after Greta Thunberg is our way of acknowledging that her generation will be responsible for fixing problems that they did not create. And it's a promise that people from all generations will join her to help," J.P. Lim, a citizen scientist who found the first individual of Greta Thunberg's snail, explained in a press release.

The research team behind the snail was organized by Taxon Expeditions, a company that pairs citizen scientists with researchers for discovery expeditions.

It's not the first time a team from Taxon Expeditions has leveraged a celebrity climate activist's name for a new species. In 2018, the group discovered and named a new beetle after actor and environmentalist Leonardo DiCaprio.

According to a press release, the actual Greta Thunberg was "delighted" to have this species named after her.

More on rare species: Scientists Thought This Creature Was Extinct For 30 Years. Then It Returned.

The Humanity!
Chimpanzee Star of "Buddy" Found Alive After His Owner Allegedly Faked His Death
6. 6. 22
Read More
Corvid Pandemic
Silicon Valley City to Use Cheapo Lasers to Fight Invasion of Furious Crows
1. 18. 22
Read More
AI That Counts And Identifies Wildlife Could Be A Game-changer For Ecologists
6. 6. 18
Read More
+Social+Newsletter
TopicsAbout UsContact Us
Copyright ©, Camden Media Inc All Rights Reserved. See our User Agreement, Privacy Policy and Data Use Policy. The material on this site may not be reproduced, distributed, transmitted, cached or otherwise used, except with prior written permission of Futurism. Articles may contain affiliate links which enable us to share in the revenue of any purchases made.
Fonts by Typekit and Monotype.