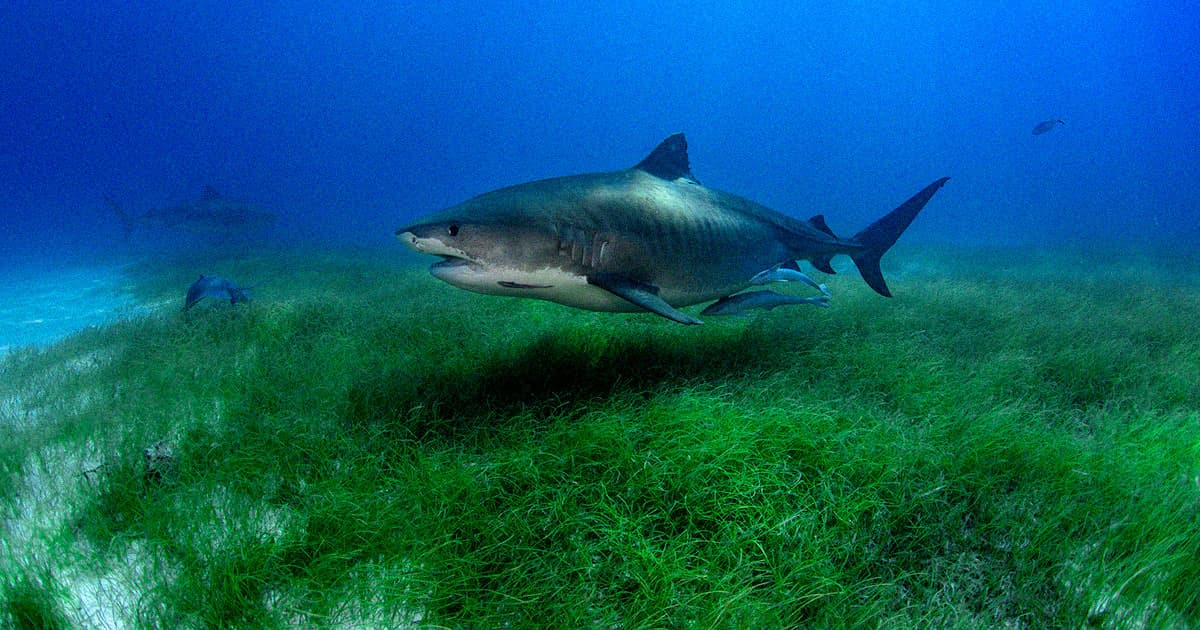 The ocean is stranger than we know.

The ocean is stranger than we know.

Researchers attached cameras and trackers to the dorsal fins of tiger sharks to study the seabed.

To their surprise, the sharks led them to an astonishing discovery: a massive underwater forest of seagrass — the world's largest, they believe — stretching 35,000 square miles across the Caribbean seabed, as detailed in a new study published in the journal Nature Communications.

"This finding shows how far are we from having explored the oceans, not just in the depths, but even in shallow areas," coauthor Carlos Duarte from the King Abdullah University of Science and Technology in Saudi Arabia, told The Guardian.

Seagrass, an important feeding ground for marine animals, can also store copious amounts of carbon, making studying it critical in the fight against climate change.

There's a lot we don't know about the large swathes of seagrass lurking beneath the surface, including how much area they cover, as they're tricky to spot using aerial or satellite-based photography.

To save money and time while getting a closer look, the team of researchers chose to forego human divers or submarines, sending agile tiger sharks instead. The expert divers are able to cover large swathes of the seabed effortlessly.

Knowing where there's seagrass is crucial in our understanding of how climate change is affecting the globe and marine life. In fact, disturbing it can cause significant amounts of carbon dioxide to be released, contributing to climate change.

Seagrass and other ecosystems like it are "probably one of the best allies and assets that we have in terms of naturally trying to mitigate the effects of climate change," Oliver Shipley, senior research scientist at marine science non-profit Beneath the Waves and coauthor of the paper, told The Guardian.

Researchers are now hoping to user other mammal species to explore other still-unexplored corners of the oceans.

"They are going take us to new places that we didn’t know existed," Shipley told the newspaper.

More on sharks: Scientists Intrigued by Sharks That Can Walk on Land for Two Hours