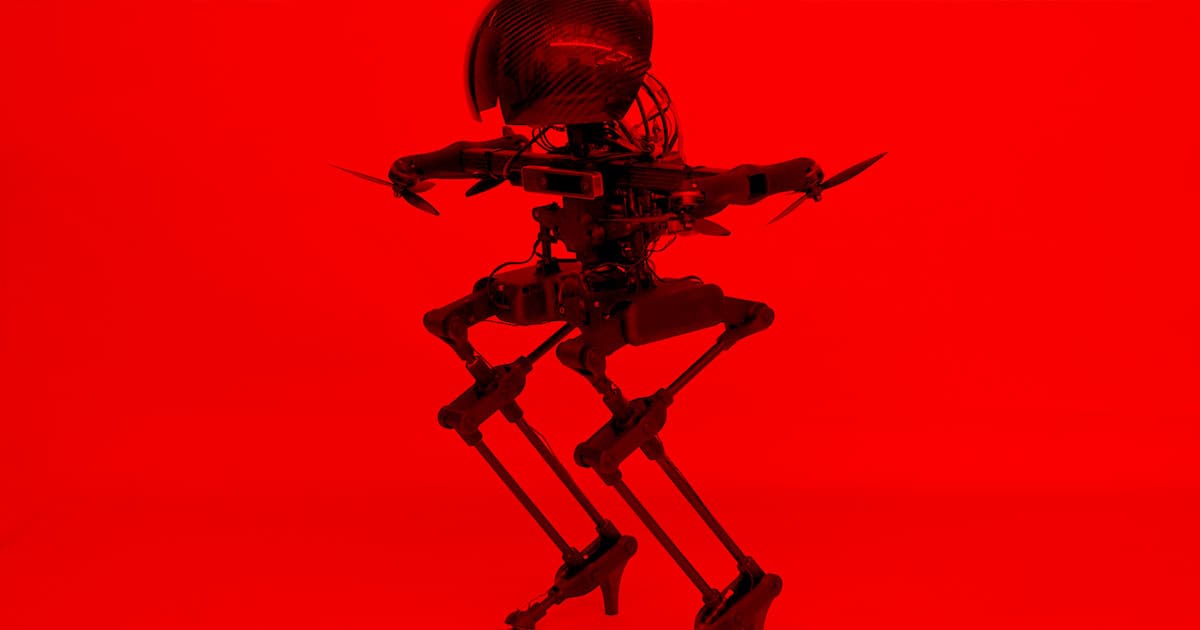 This Scary-Looking Robot Can Walk and Fly

It can even skateboard and slackline.

It can even skateboard and slackline.

Get It Off Me

Researchers at Caltech have opened the doors to hell and allowed a creepy robot that can walk on two spindly feet and even fly to enter our world.

The terrifying biped, called LEONARD (LEgs ONboARD drone), or LEO for short, is basicically the bottom half of a humanoid robot strapped to a flying drone.

The researchers' goal wasn't to come up with the next mass-marketable invention, but to test new ways of locomotion for robots meant to complete dangerous jobs and explore hard-to-reach places.

Did we mention it can skateboard and slackline as well?

The team goes as far to suggest that their creepy invention could carry equipment on the surface of other worlds, including Mars or Saturn's moon Titan.

"We drew inspiration from nature," Soon-Jo Chung, corresponding author of the paper published this week in the journal Science Robotics, said in a statement.

"A complex yet intriguing behavior happens as birds move between walking and flying," Chung added. "We wanted to understand and learn from that."

One major challenge for the team was to conserve enough energy to allow the bot to fly while also covering some distance on the ground.

"Based on the types of obstacles it needs to traverse, LEO can choose to use either walking or flying, or blend the two as needed," Patrick Spieler, co-lead author, said in the statement.

"In addition, LEO is capable of performing unusual locomotion maneuvers that even in humans require a mastery of balance, like walking on a slackline and skateboarding," he added.

Next, the team is hoping to decrease LEO's weight and increase the thrust of its propellers to allow it to cover even more ground.

It's exactly what we needed: an apocalyptic murder drone that can not only fly but also run to catch up with us.

READ MORE: LEONARDO, the Bipedal Robot, Can Ride a Skateboard and Walk a Slackline [Caltech]

More on robots: People in Singapore Furious About Robot Cops That Lecture People on Social Distancing