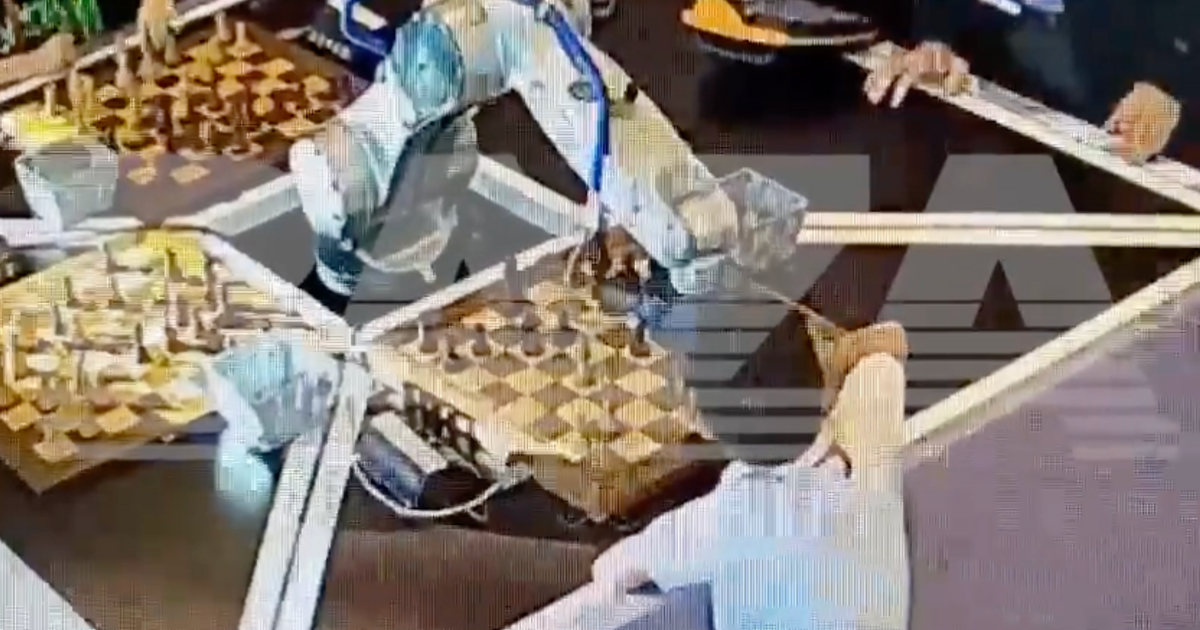 A chess robot playing three games at once broke a 7-year-old boy's finger in a tournament that ended Thursday.

Russian-language news outlet Baza posted video footage of the moment to its Telegram channel and reported that the boy suffered a fracture but is otherwise okay. Twitter netizens then nabbed the footage and uploaded it online for all to see, like the video shown below.

There is no violence in chess, they said.

According to Baza, the robot "squeezed" the kid's finger, but it's possible that's a mistranslation or just a little off. The video makes it seem as if the robot placed its "finger" or a chess piece down on top of the kid's hand, as if it were just confused.

Russian state-owned news outlet TASS reported that the child was able to finish the tournament while wearing a cast, but that his parents may be filing suit, as spotted by PC Gamer yesterday. For now, authorities think the injury was an accident.

"The robot broke the child's finger — this, of course, is bad," Moscow Chess Federation president Sergey Lazarev told TASS, via PCG. "The robot was rented by us, it has been exhibited in many places, for a long time, with specialists. Apparently, the operators overlooked it. The child made a move, and after that we need to give time for the robot to answer, but the boy hurried , the robot grabbed him. We have nothing to do with the robot."

Sergey Smagin, a deputy of the Moscow Chess Federation, told RIA Novosti — also owned by Russia — said this was the first time in his memory he could remember a robot breaking anyone's finger.

In all likelihood the robot, which was admittedly playing multiple opponents, just got confused or tried to make a move at a bad time.

Good thing there's not a violent chess bot on the loose at the same time Google AI's was (most likely falsely) accused of gaining sentience. We wouldn't want them to team up.

Diner Drama
People Furious at Robot Serving Pancakes at Denny's
11. 28. 21
Read More
Mini-Brain in the Cell Membrane
This Startup's Computer Chips Are Powered by Human Neurons
4. 1. 20
Read More
Robot Violence
YouTube Accidentally Removed Robot Battle Videos for "Animal Cruelty"
8. 20. 19
Read More
+Social+Newsletter
TopicsAbout UsContact Us
Copyright ©, Camden Media Inc All Rights Reserved. See our User Agreement, Privacy Policy and Data Use Policy. The material on this site may not be reproduced, distributed, transmitted, cached or otherwise used, except with prior written permission of Futurism. Articles may contain affiliate links which enable us to share in the revenue of any purchases made.
Fonts by Typekit and Monotype.