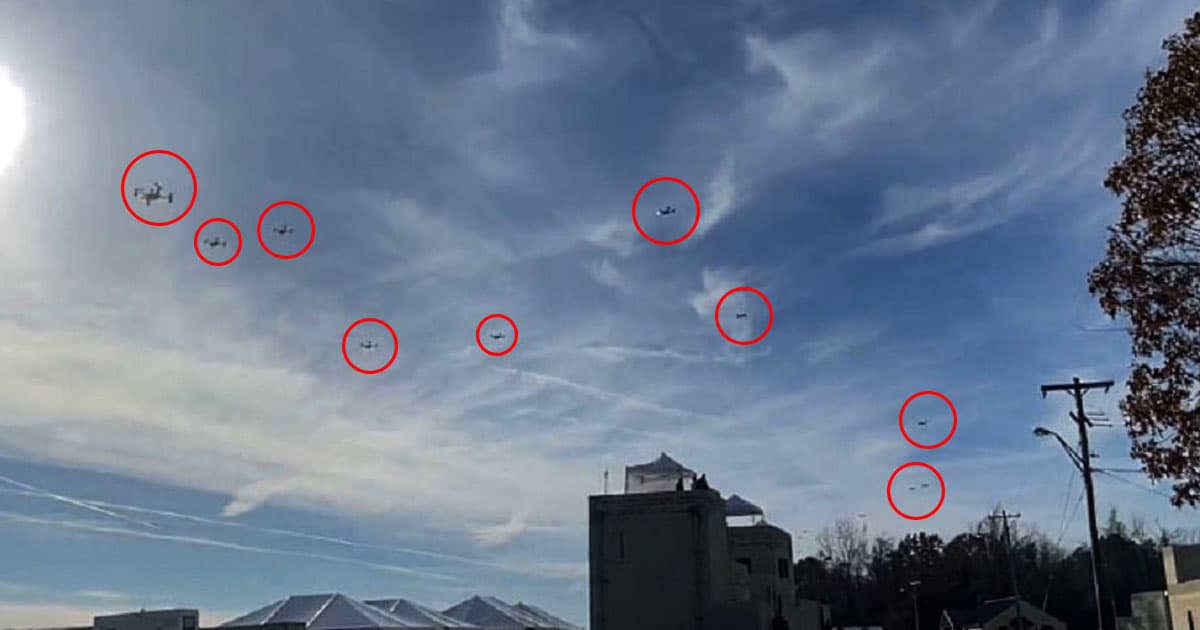 In a horrifying example of the escalating warfare capabilities, the Pentagon has helped develop technology that allows a single person to control 130 drones for military operations.

Behind the project is defense contractor company Raytheon, which is working with the Defense Advanced Research Projects Agency (DARPA). The team successfully tested their grim new technology in an indoor and outdoor urban setting, according to a press release from the company.

Dubbed "OFFensive Swarm-Enabled Tactics" (OFFSET), the swarm was made up of 130 physical drones as well as 30 simulated drones, whatever that means. Raytheon claims that the software and hardware used in the swarm allows an operator to command a swarm with "minimal training."

"Controlling a drone swarm changes the way an operator or group of operators think about the drones," Shane Clark, the principal investigator of OFFSET at Raytheon. "Takeaways from this exercise help inform us of the inflection points between utility and manageability."

The operator controlling the swarm won’t be doing so at a desk with a joystick. Instead, they’ll use a virtual reality interface that allows them to look through each drone individually. This creates an "interactive virtual view of the environment," the release said.

"You can look behind the building to access a view of drone locations for example and use the virtual reality environment to test and see if your mission is viable," Clark explained.

The team also created a speech interface that allows operators to give voice commands to the swarm. Clark added that this will allow the operator "to act quickly while maintaining situational awareness."

So yeah, a swarm of drones flying into warfare is a compelling — if bleak — image on its own. Knowing that a single person is controlling them using VR and voice commands, though, is downright mind-blowing.

More on warfare: US Military Horrified by Chinese Military Spending Money on Exact Same Crap They Do

FROM THE DEPT. OF THINGS TO BUY
The Best Science Gifts of 2022
Oct 19
Read More
"Hoodwinked"
New Pentagon Group Accused of Trying to "Bury" UFOs Again
12. 3. 21
Read More
Hmmmmmm
The Pentagon Just Released Its UFO Report
6. 25. 21
Read More
+Social+Newsletter
TopicsAbout UsContact Us
Copyright ©, Camden Media Inc All Rights Reserved. See our User Agreement, Privacy Policy and Data Use Policy. The material on this site may not be reproduced, distributed, transmitted, cached or otherwise used, except with prior written permission of Futurism. Articles may contain affiliate links which enable us to share in the revenue of any purchases made.
Fonts by Typekit and Monotype.